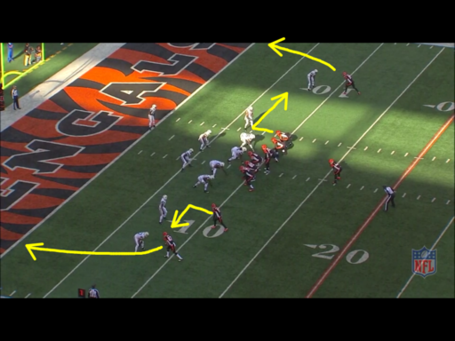 #1. 1st and Goal. Here's a little cliff note: WR Marvin Jones went off in this game. The Jets are in Cover 1 Man. Bengals are running fades on the outsides and out routes from the TE and slot WR. 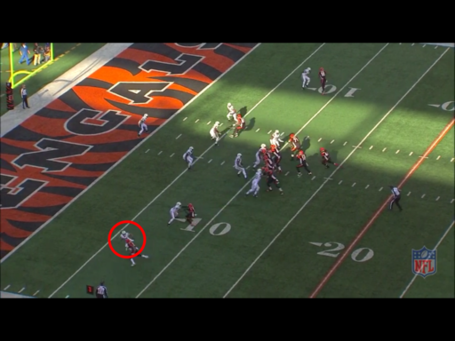 The CB stays in stride with M.Jones but turns his head away from Andy Dalton. 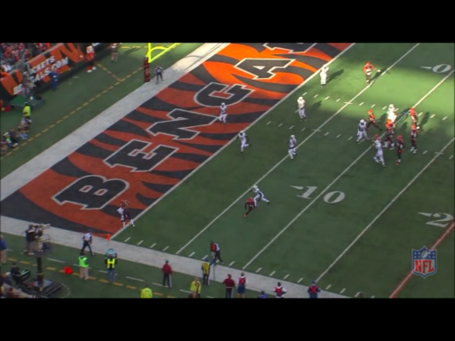 As soon as the CB turned his back, Dalton fired off a back shoulder throw. Marvin Jones read the coverage the same way and pulls in the touchdown pass. 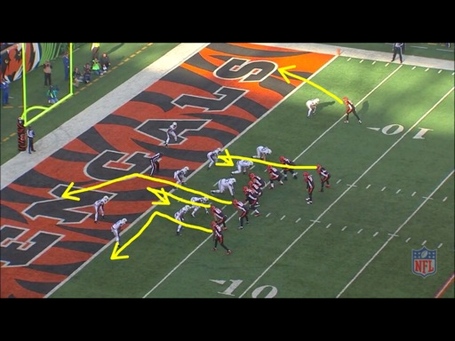 #2. 2nd and Goal. Bengals have a TRIPS BUNCH on the left side of the formation. Three routes that attack three different levels of the defense. 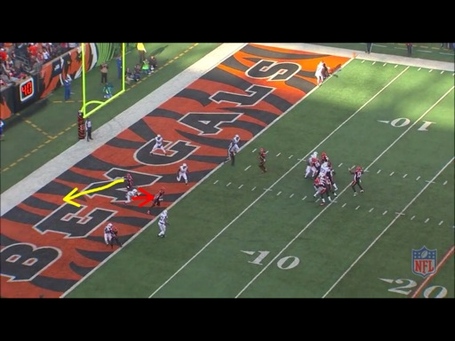 The CB responsible for the back part of the end zone abandons his responsibility to try and jump the hitch route. 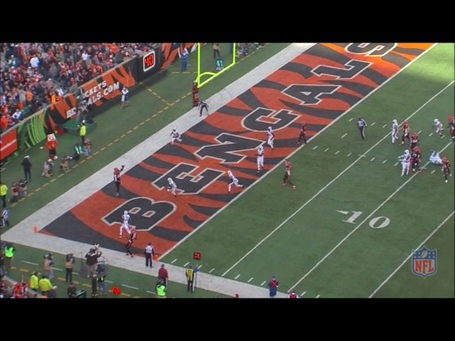 The back of the end zone is now completely vacant and Jermaine Gresham is able to catch the easy touchdown pass. 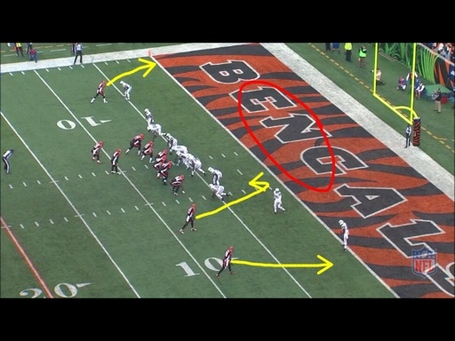 #3. 3rd and Goal. Jets are in a Cover 0 (No safety in the middle of the field). Bengals running fades on the outside with a curl route from the slot. 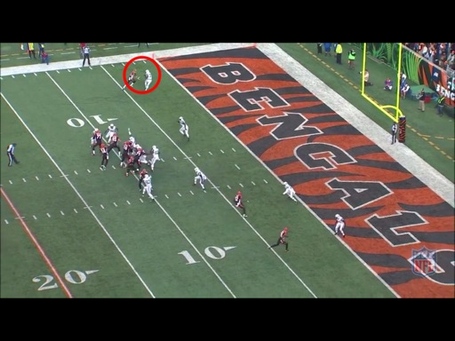 Just like the first touchdown, the CB covering Marvin Jones turns his back to Dalton. Dalton and Jones on the same page again for a back shoulder throw. 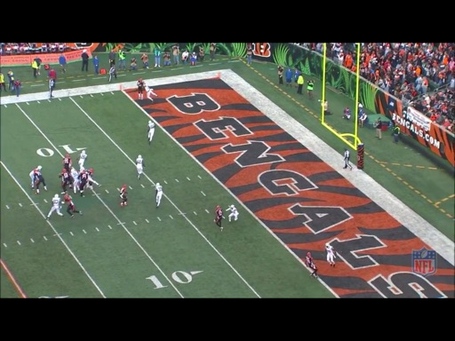 Marvin Jones goes up and secures the catch for his second touchdown of the game. 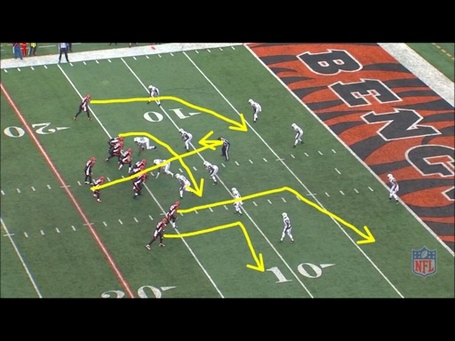 #4. 3rd and 7. Jets only rush 3 on this play and drop 8 into coverage. Dalton's primary read is the CB at the bottom of the screen. If the CB fades under the Corner route, he dumps it off to the out route. If the CB comes up on the out route, you throw the corner route over his head. 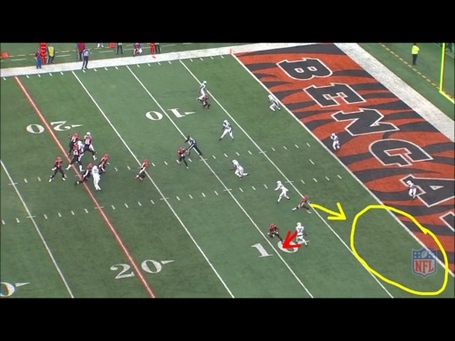 Andy Dalton gives a little pump fake and the CB commits to the out route which leaves the corner route running into open space. 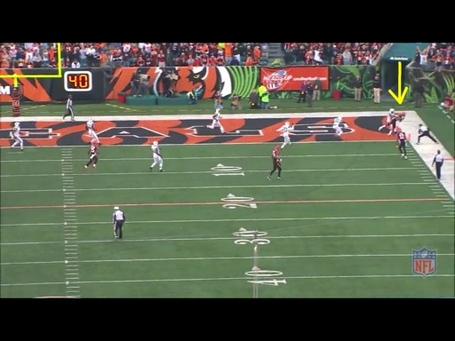 Dalton delivers the ball and Marvin Jones is able to tap two feet down for his third touchdown of the game. 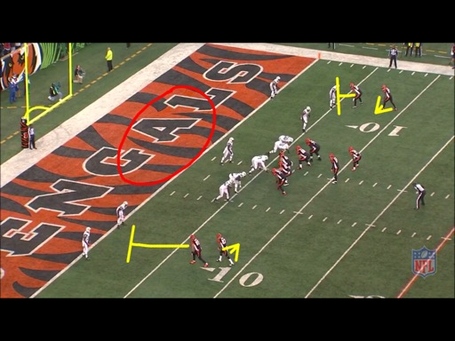 #5. 2nd and Goal. Jets go Cover 0 again. Bengals have two screen passes or "stay" passes set up on each side. Basically, a game of 2-on-2 on the outside. 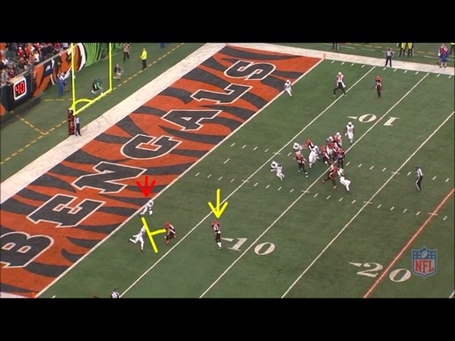 Andy Dalton decides to go to the wide side of the field with the ball (also the side that didn't have press coverage). Marvin Jones catches the pass and is left one on one. 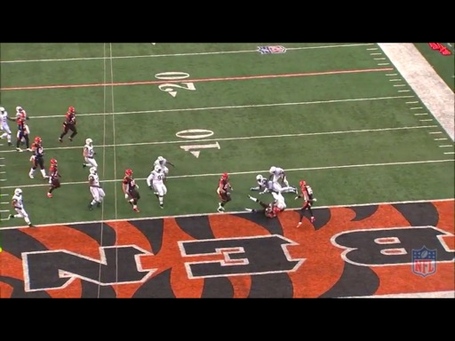 M.Jones breaks that tackle and is able to fall into the end zone for his fourth touchdown of the day.

That wraps up the Bengals/Jets review. Anyone else notice that in Week 6, 7 and 8 there hasn't been a rushing touchdown? Does that concern anyone?