If you missed the beginning of the "Jay Gruden's TDs in 2013" series, you wouldn't be alone you can find the film breakdown of Week 1-5 HERE. Continuing on in the series, we are looking at Week 6 and 7. 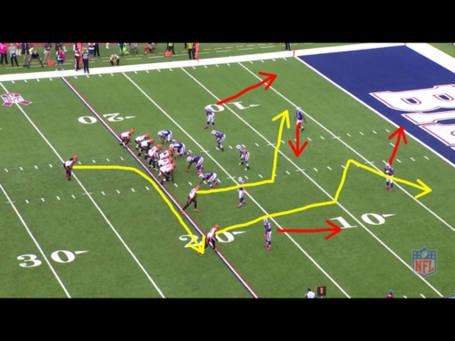 #1. One of the things I haven't been able to praise Jay Gruden for yet is his tendency breakers. A common play in today's NFL is a play-action pass that features Double Post routes. Gruden goes a little unorthodox and has a Post-Corner route on the outside. Bills are in Cover 3 which is specifically designed to prevent the "big play." 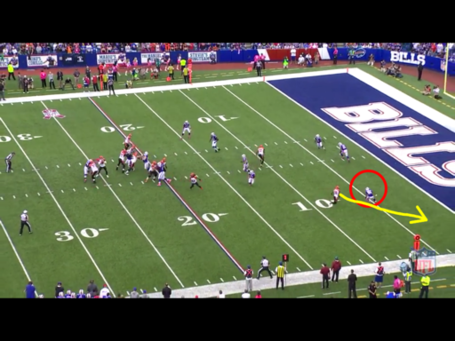 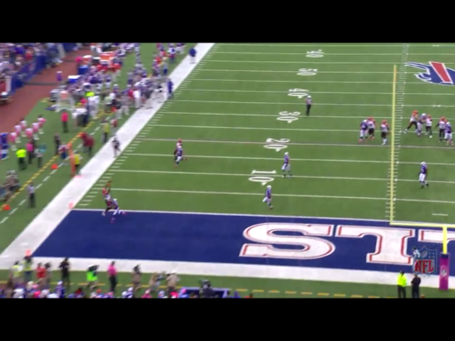 Andy Dalton delivers the ball to the back of the end zone for A.J. Green and McKelvin is unable to recover. Touchdown. 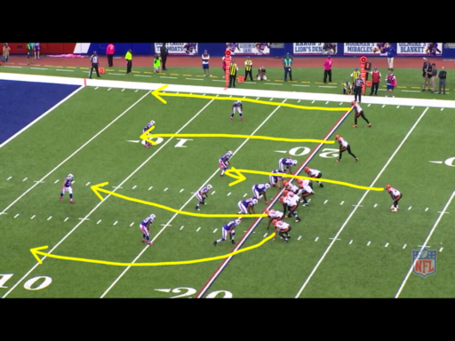 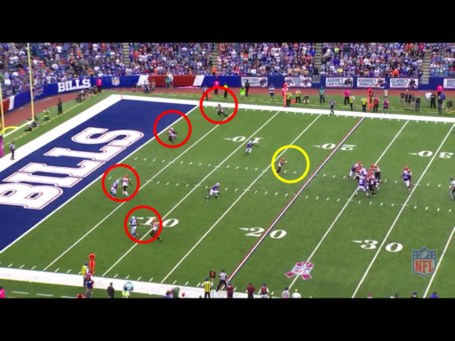 As you can see, the four deep routes are covered so Dalton dumps it off to Bernard. 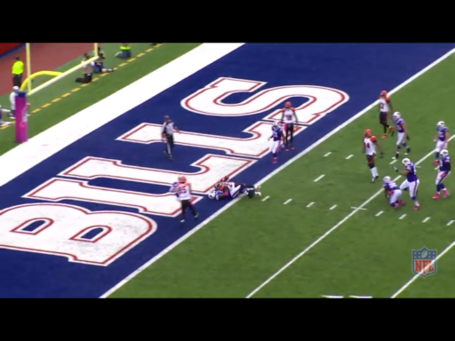 Bernard caught the ball with two linebackers closing in on him. He was able to break three tackles and get into the end zone. Jay Gruden believes in getting the ball in a playmaker's hands in space. This is the second time Bernard has scored on this play when it looks like he shouldn't. 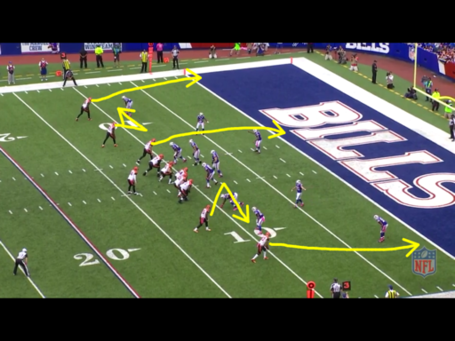 #3. One of the reasons Jay Gruden's offense was so successful in the red zone last year is because he doesn't stop attacking. Bengals are on the 10 yard line yet they have 5 players going out on routes. Three players are going "deep" with two Zipper "dump off" routes. 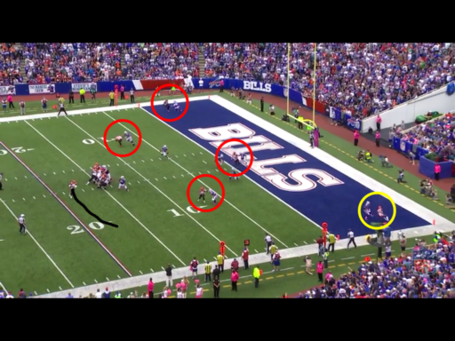 The Bills only rush three and drop eight players into coverage. Everyone is covered and Dalton is forced to roll out. Marvin Jones (yellow circle) sees Dalton in trouble. 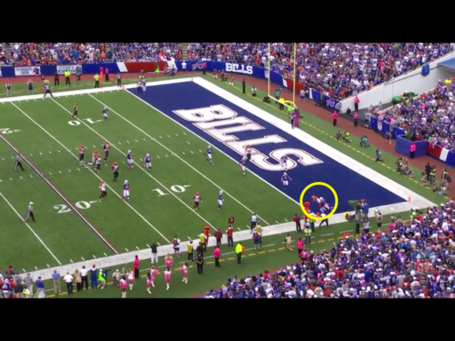 Marvin Jones works his way back to the QB and catches the touchdown right at the pylon.

(Editor's note: It is rumored that Kyle Shanahan's offense didnt require the WRs to practice what happens when a play breaks down. Kyle was said to be convinced that if his play was executed the correct way, player X would be open. If player X wasn't open, option #2 was Robert Griffin III scrambling. I don't know the validity of these claims, but reviewing tape, WRs didn't get open very often when a scramble drill started). 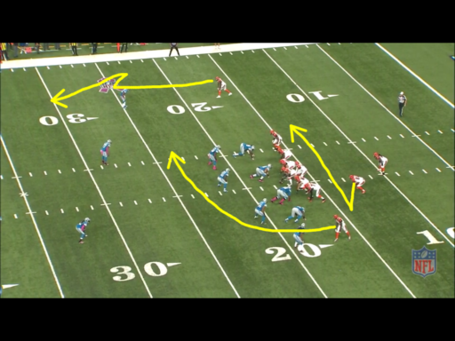 #1. Remember I mentioned tendency breakers? First touchdown vs. Lions comes off one too. This is a stretch left, play-action bootleg right. There's a flat route and a cross route. It's common for the outside route to be a 15 yard comeback route so the QB has 3 levels of the defense to read in generally the same area. Well, AJ Green is running a Stop-n-Go. Lions are in a Cover 3, once again, that's supposed to prevent the "big play." 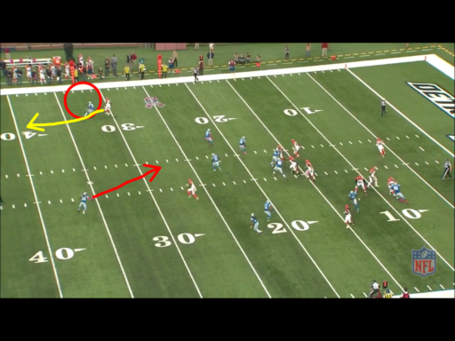 The CB is peaking into the backfield and sees its a play-action bootleg so he is expecting a comeback route. He slows his bail technique and when AJ Green stops, the CB commits to comeback and tries to jump it. AJ Green, runs right past him. 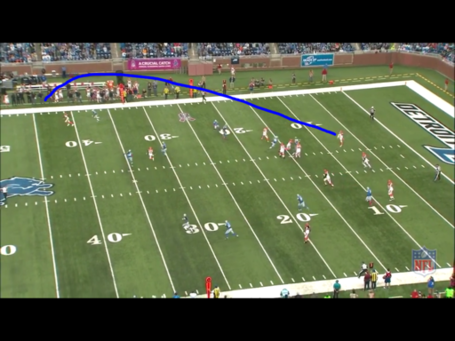 This ends up being a touchdown. It should have been much easier than it was because Dalton gravely under-threw the ball and Green had to wait for it. The CB was able to catch up but Green broke the tackle and took it the rest of the way. 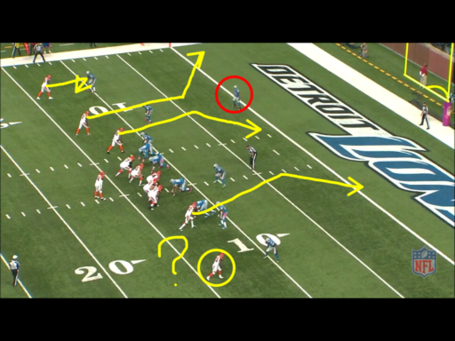 #2. Here's a 5 man route inside the 15 yard line. The safety is shading AJ Green's side at the top of the screen. There's a question mark by Giovanni Bernard because I'm 98% positive he was supposed to run a little hitch route to hold his defender and let the Corner route open up (same combo as the top of the screen). It's called the SMASH concept. Instead, he runs a fly route which I'm sure Gruden and the guys had a laugh about in the film room. 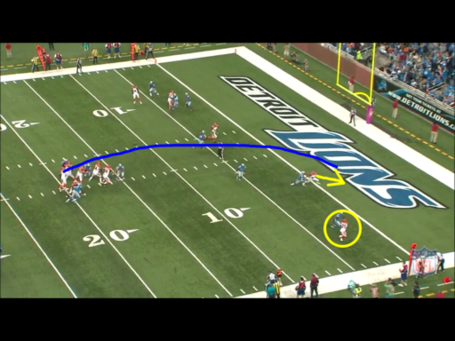 Andy Dalton knows where to go with the ball based on coverage. Bernard almost runs coverage into the route though. 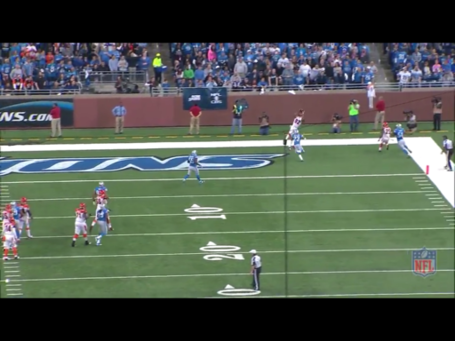 Marvin Jones is able to jump up, high point the ball and bring it in for a touchdown. 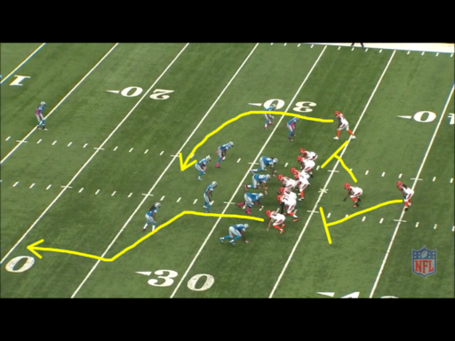 #3. Here's a Play-Action pass with what looks to be a crosser route and a corner route. Except the corner route turns into a fly route by design. 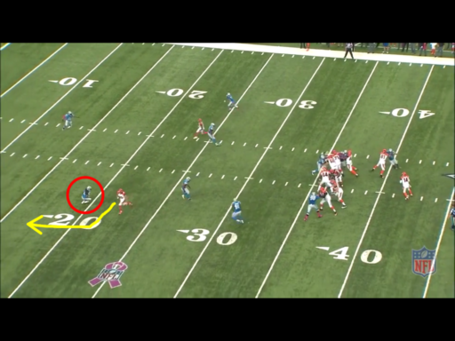 Lions have a CB matched up with Tyler Eifert at the bottom of the screen. The CB uses a lazy technique, opens his hips the wrong way but still expects to undercut route of the TE because of his speed advantage. As he undercuts, Eifert heads up field. 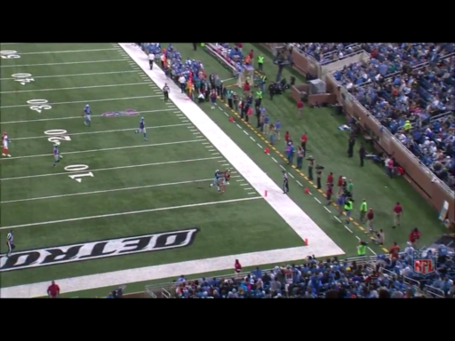 The CB does use his speed to recover but Eifert uses his strong hands to snatch the ball and bring it down in the end zone.

I will continue to break down these scoring plays throughout the off-season.