Mike Harar spoke with the former all-pro Cowboys safety to discuss the Redskins' rivalry with his former team, the NFL today and his new venture FanPrint. Plus, you can win a free t-shirt!

During his twelve year career with the Dallas Cowboys, Darren Woodson broke the team's record for career tackles and was a thorn in the Redskins' side many times.  I had an opportunity recently to speak with the former all-pro safety and current ESPN analyst.  He shared his thoughts on the Redskins/Cowboys rivalry and on the new rules in place for defensive backs in the NFL today.  He also announced the launching of a new website called FanPrint where fans can buy and create t-shirts and other apparel with the likenesses of their favorite NFL players.

M.H.: Talk to me about the Redskins/Cowboys rivalry.  What did it mean to you as a player and is it still alive today?

D.W.: We opened up our season in 1992 as a rookie on Monday night against the Redskins and they had just come off of being the Super Bowl champs.  Going into the game, everyone was nervous.  Jimmy Johnson was nervous.  Everybody was on edge. When I saw Darrell Green and those guys running out I thought, "Ok, This is a big deal."   The fever that Cowboys fans had and the tenacity that the Redskins had was huge in my first game against them.  But I really got the feel of it when I went out to RFK and played in that old stadium.  To this day, and I always say this: It is THE best football stadium I've ever played in.  When they scored, the benches were rocking.  It was like a sea of people in there and they were right on top of you.  It is the best football experience I've ever had in my entire career playing in the first game at RFK stadium.

M.H.: How do you feel about the new tackling rules that the NFL has put in place for defensive backs?

D.W.: It's tough being a safety in this league now.  It's hard to hit someone and know where your strike zone is when that strike zone is forever changing.  Especially when the ball's in the air between the numbers.  That's a hard play because it's happening so fast.  I was just on OTL (Outside the Lines) on ESPN with T.J. Ward for the Denver Broncos and they were talking about his hit on (Rob) Gronkowski that ended his season (last year).  Ward said, "Look, if I hit him up high, there'll be a flag on the play.  So I aimed low and I tore his ACL.  I didn't mean to tear his ACL but I tore his ACL."  You have to take down a 280lb man.  You have to get a guy down because if you don't get him down you'll have meetings on Monday.  If I don't take him down and he scores a touchdown, my job's in jeopardy.  It's either you or it's me.  And it's going to be you.  It would have been hard for me back then because I was taught to aim high.  Back in the 1980's that‘s how you taught safeties to hit.

M.H.: Tell me about the new venture you're working on with FanPrint.

D.W.: Fanprint is a really cool online store that sells products with custom designed graphics representing individual NFL players and teams.  It's a first of its kind in terms of its license agreement with the NFL Players Association.  With our involvement with the NFL PA, some of the licensing fee is going to the NFL Players Assistance Fund.  If you don't know anything about the Players Assistance Fund, players that have played in the past that have fallen on hard times benefit from it.

Also, with FanPrint, fans can really be involved with the players on a personal level.  We're not just talking about any old apparel that's out there.  The fans can create some of the art that goes along with what we're doing.  We're bringing in fan artists of the Seattle Seahawks, Washington Redskins (and others) all across the country to put their prints and their artwork on the shirts.  The fans will love it because it's not just your top ten players in the league.  It's not just your Aaron Rodgers, Peyton Manning's and Russell Wilson's.  We're starting off with the 100 top players in the league and then creating more after that.  You'll see guys who may be number five or number six on the depth chart on a team in terms of popularity who will have their likenesses on some of these t-shirts.  We are extremely excited to do this and have the relationship with the NFL PA and the Players Assistance Fund.

All of their products are designed by fans, for fans. Any fan can contribute, and all fans are compensated every time their design touches a product.  Their partnership with the NFLPA gives fans extra access to creating designs for top players. 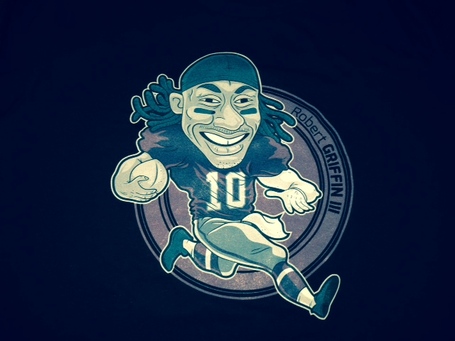 Unlike some other companies, FanPrint can legally use all player' names, numbers and likeness.  They also have agreements in place with the NHLPA and the MLBPA, and are working to have agreements with other major leagues players' associations soon.

Check out the FanPrint website here and see their apparel selection so far.  Also, be sure to use this opportunity to get your own design out there if you have one.

For Hogs Haven readers, we will be doing giveaways from time to time with FanPrint products.  The first one starts today!  The first person to correctly answer this question in the comments section will win a shirt of their choosing from FanPrint:

Against which team did Darren Woodson break the Cowboys career tackling record in 2002?

Good luck and look for more prizes from Hogs Haven and FanPrint soon!