An All-22 film look at Redskins against the Giants while covering the seams.

We saw it against the Eagles. So did the Giants. While we kept a heavy Nickel package in the game to stop LeSean McCoy, the Eagles adjusted and started taking advantage of the matchups in the passing game from this package. Jim Haslett and the Redskins buckled down to stop Rashad Jennings and the Giants so they did the same. Let's take a look. 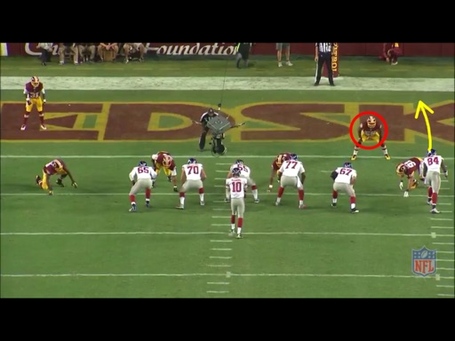 1. Here is TE Larry Donnell lined up with Perry Riley over him. Now Riley has his deficiences in coverage but this actually wasn't that bad. 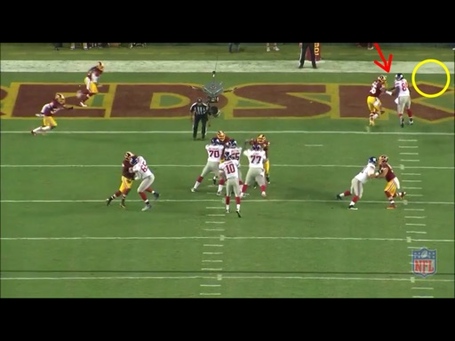 Riley does a good job staying with Donnell in the screen but with a big-bodied TE like that, Eli Manning throws it to the outside shoulder which would force Riley to have to go through him to make a play on it as he is playing inside technique. 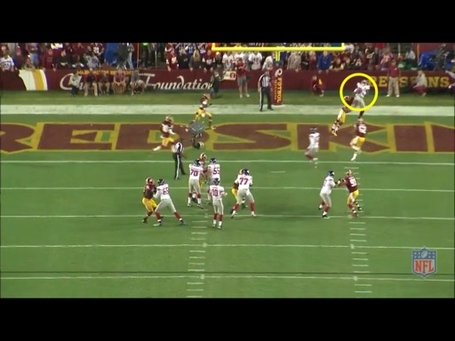 Donnell reaches up and pulls in the touchdown pass. Giants beat us athletically on this one. 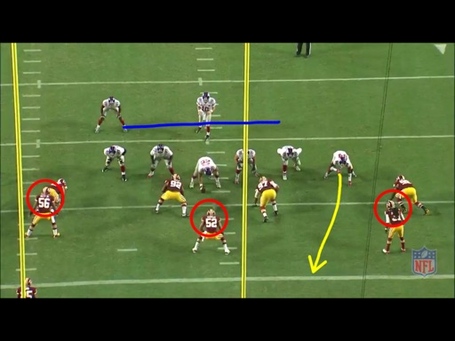 2. The RB comes across the formation which flexes Perry Riley on him and brings Keenan Robinson right into the middle of the field. TE Larry Donnell again running up the seam. I don't think Keenan is spying on this play but if he isn't giving Brandon Meriweather inside help then Meriweather should be head up on the TE. 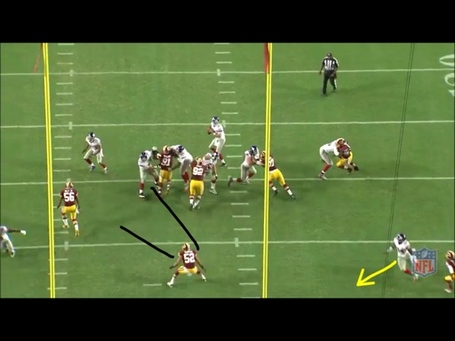 Keenan shows a lot of attention to the left (so maybe he wasn't giving inside help to Meriweather). He seems to be concerned about the RB beating Riley in coverage but that gives a completely wide open alley as Donnell pushes his route outside first to get Meriweather even further outside before he breaks it in. 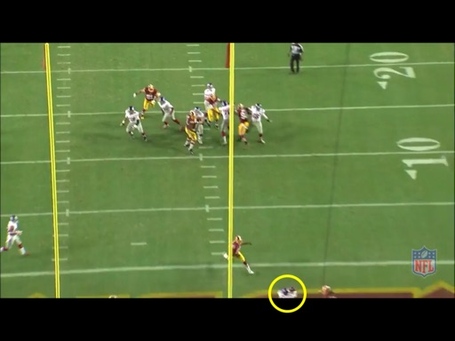 Donnell makes the catch with little resistance and gets his 2nd TD grab of the game. Giants beat us schematically here. 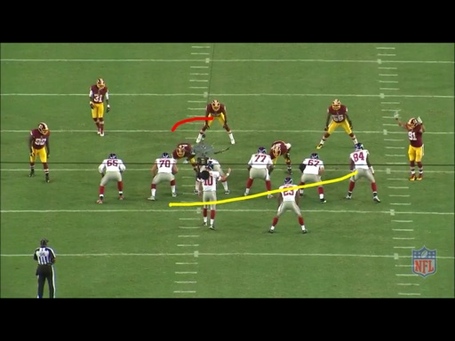 3. I actually like this play. Giants motion Donnell into the backfield which brings Keenan Robinson over him. 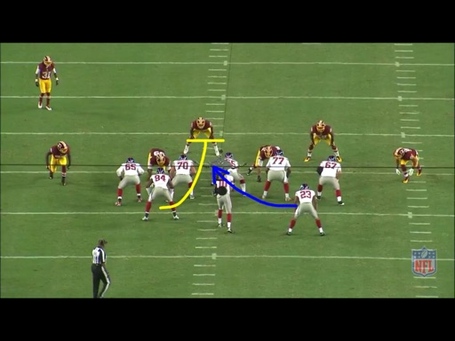 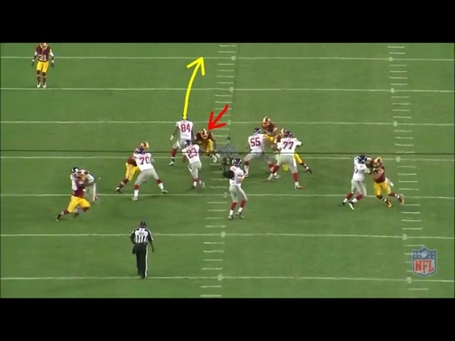 Donnell comes up the gap like a blocker and Keenan ducks his shoulder thinking he just shed a block when in all reality, he just let his man go free on a pass route. 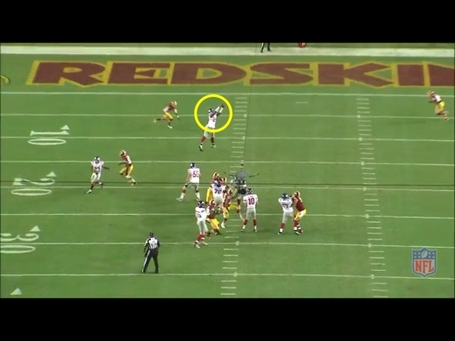 Donnell has tons of room to make the catch and Meriweather chops him down in the knees but after a big gain. Giants beat us here intelligently. 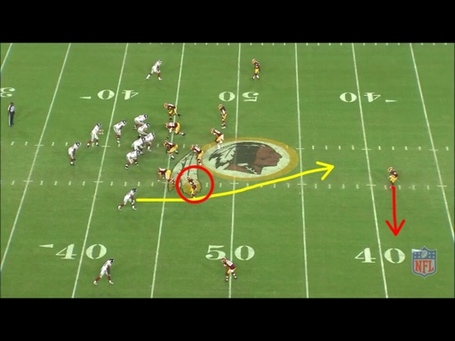 4. Let me preface this by saying E.J. Biggers did not have a good game. Earlier he got beat by faking a blitz right at the snap and letting Victor Cruz go behind him. Here, he doesn't make that mistake. Victor Cruz running a seam route. Ryan Clark (at the far right of the screen) flies down right off the snap opening the middle of the field. 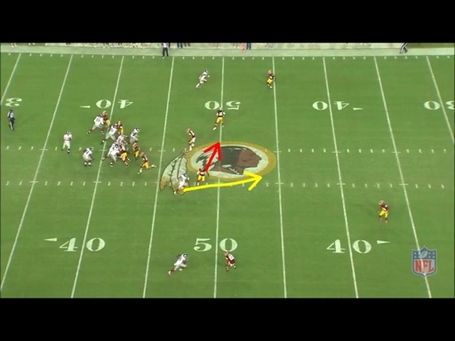 At this point, Victor Cruz is running full speed straight down the middle of the field while E.J. Biggers is back-pedalling towards the middle. 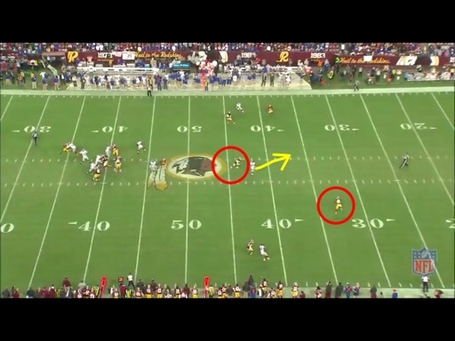 You have to respect Cruz's speed or he'll run by you.....and he did. Clark is in no position to be over the top and Cruz has separation from Biggers. 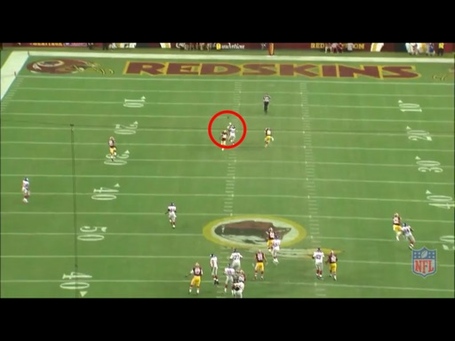 This would have been a huge gain if not for an Eli Manning overthrow.

We were beat intellectually, schematically and athletically. In the NFL, you can give up some on one or two of those but lean on the third to pull you through. You can't lose in every aspect. But again, it's pick your poison. LBs were left on the field to stop Rashad Jennings just as they were left on the field to stop LeSean McCoy. Either the NASCAR package needs to prove it can stop the run, or someone needs to cover better.