Alfred Morris has been a rock for the Washington Redskins since being drafted in the 6th round out of Florida Atlantic University in 2012.  He has started every game(36) since being drafted, rushed for 3,204 yards, and scored 23 touchdowns.  Morris set the Redskins single-season rushing record in 2012 while rushing for 1,613 yards and 13 TDs, helping the team win it's first division title since 1999.  This year he became the fastest Redskins running back to reach 3,000 yards, breaking the record in his 34th game.  New Redskins Head Coach Jay Gruden calls Alfred Morris 'Steady Eddie' because he consistently does what he's supposed to do, when he's allowed to do it.

Alfred Morris's signature touchdown celebration is a home run swing, and then watching it sail over the fences.  This started in OTAs during his rookie year when he met some Little League players who were staying in the same hotel as the Redskins.  Morris hung out with them for part of the day, and went to see them play a game the following day.  He promised them that he would do the homerun swing to celebrate with them and he has done it ever since.  He also adds a tribute to his days as a Florida Atlantic University Owl at the end by throwing up three fingers for the Owl's wings.

The guys at BreakingT have made a t-shirt to celebrate the most consistent player on the Redskins offense.  BreakingT is a t-shirt company based in Washington, D.C. that makes shirts locally for local teams and more.  They were kind enough to offer a few shirts as prizes for our Kirk Cousins Caption It! Contest last month.  This shirt can be ordered through their website, and should arrive in time for this week's Monday Night Football game if they are ordered by Friday at noon.  More information is available here. 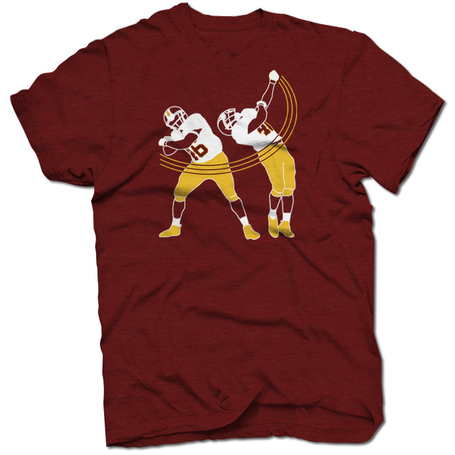