Dear Diary: My Experience at Metlife Stadium for Week 17 Redskins vs Giants

My Road to Metlife Stadium week 17 vs NYG was a phenomenal experience, which got even better when I started talking to Redskins fans.

Share All sharing options for: Dear Diary: My Experience at Metlife Stadium for Week 17 Redskins vs Giants

This season I had the fortune to pair up with Metlife and provide some articles helping promote all the teams vying to play the Super Bowl in New York  this year. As a sign of gratitude, they offered me four tickets to the week 17 game vs the Redskins, two of which I gave away on Hogs Haven.

It was the week before Christmas and I had a tough decision to make. The Redskins were 3/4ths the way into an eight game losing streak, the Shanahan turmoil was in the equivalent of the "spin cycle," and I was just offered two free tickets to the meaningless Giants vs Redskins week 17 game. The weather would surely be bad and there's the financial burden of getting up there and back from D.C. When I asked my Giants friends what the "Coaches Club," section was, they told me "it's a club level on the field." OK, I'm in...and boy am I glad I made that call.

For anyone that has been to neither the old, Giants stadium or Metlife, let me help paint a picture. The old Giants stadium was an experience in itself. I had unopened cans of beer thrown at me, bullhorns to the ear, beers dumped over my head in 15 degree weather....and I loved it all. That's fun times, though I could do without the cans of beer whizzing by me. In comparison, the Metlife tailgate is like being at Sunday church service. Not a single heckle and that goes back to previous years....not just this meaningless 2013 game. Fancy stadiums simply price out the blue collar crowd. But hey, to me, drinking beers is drinking beers. I honestly thought I'd see at most two Redskins fans all day....I saw about fifteen before I even made it off the train. 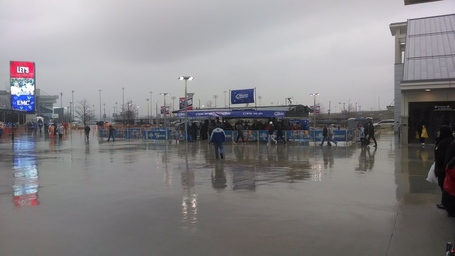 We got off the train (pictured right) an hour before kickoff so we were running a bit since I'm usually a four hour tailgate type of person. One can't see the rain coming down in this picture but it was just an awful, cold winter day. This Bud Light bar directly next to the Metlife Stadium was serving $5 beers up to kickoff, but we thought we'd be a bit more thrifty and drink our 12-pack of Modelos under a half-covered ledge.

This Bud Light pavilion had a stage and microphone setup where they were reading off trivia questions for prizes such as tickets, jerseys, and even a new grill. The questions were BEYOND super easy, yet it literally took over 10 wrong answers before a Giants fan could get any of them correct. My Giants friend and I listened from a distance speechless:

One thing I thought was nice was that in front of the Metlife gates, there was a large truck that was doing bag checks for those that couldn't bring in their large purses or bags. It also surely acts as a nice revenue stream for the team.

When I entered Metlife, we walked right into what was heaven on earth. A beautiful display of free food stations that had everything from sushi, shrimp, cheese and meat spreads, pizza, beef carving stations, and more. If surveillance video captured me walking in, it probably would have resemble the Homer Simpson drooling face. 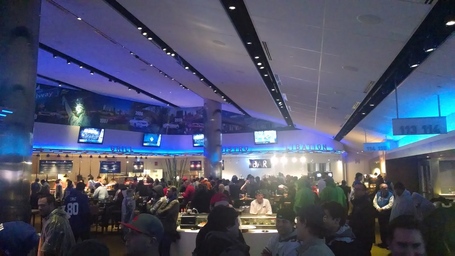 And then I look to my right and see this NYG fan in a Sam Huff jersey. As much as I think of Sam Huff as a Redskin, I just can't get over all of his books, and even recent ones, have him in NYG gear on the cover. Huff married the Redskins, but the Giants are his true first love. 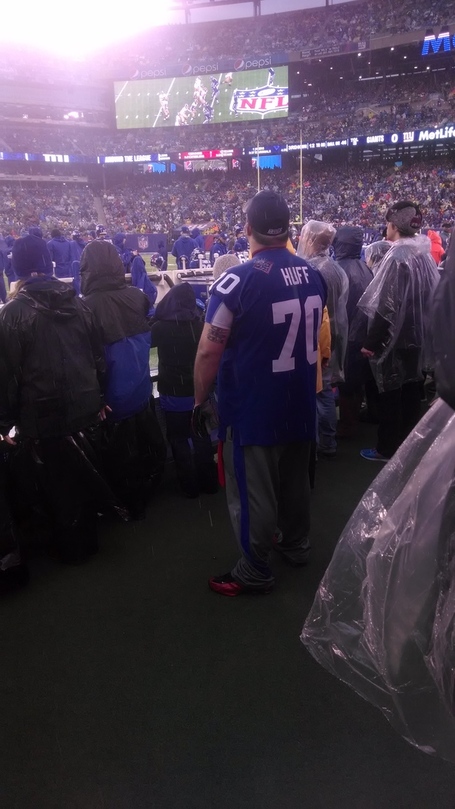 The rain and cold did not let up, so we went back inside for some good eats.... 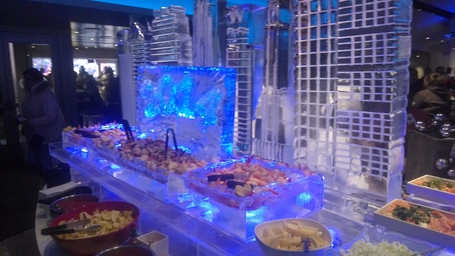 Another neat feature is that the far side of the Coaches Club has a window pane that leads from the field to the Giants locker room. I was standing there when Eli Manning gimped by me after spraining his ankle. 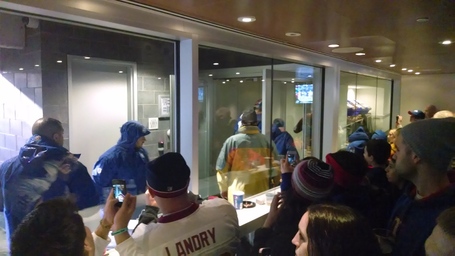 After half-time I decided to walk around and meet the other Redskins fans here. Unfortunately I did not get to meet the guy in the Redskins' Laron Landry jersey.

Most of the fans I talked to we broached the subject that given the state of the team, should we still push our kids to support the Redskins? Pretty much all the Skins fans I've talked to said they would not. That's quite staggering to hear and is part of the problem with how the Redskins do business. Sign gate, the drama, the losses. Many teams like the Browns have losing seasons but their fanbase is still strong. Dan Snyder has a major problem on his hand, which I'll address in a separate post. 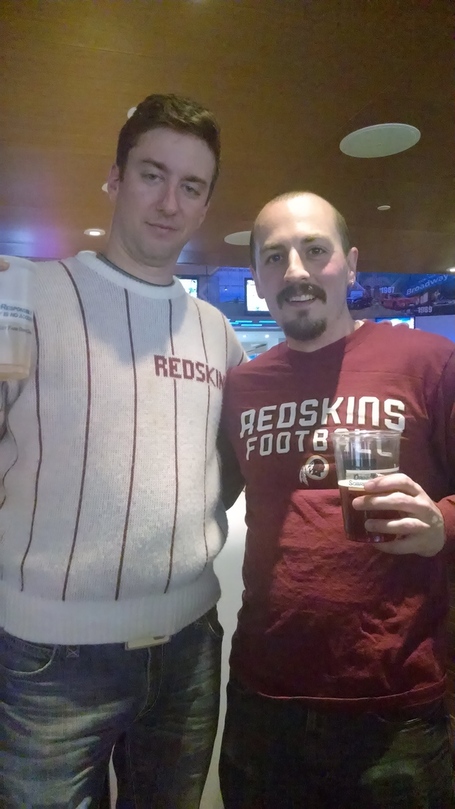 And last I met Randy Williams and his son. Randy lives in New Jersey and has been a season ticket holder for over seven years. I asked if there was anything that would make him give up those tickets, "No way!! In fact I'm moving down to the club level this year." Spoken like a true die hard fan. When I asked his son what he thought of the Redskins season and the game....he replied: "THIS IS THE BEST EVER!!" Man...after being surrounded by so many beaten up Redskins fans, myself included, it was refreshing to meet the Williams'. HTTR. 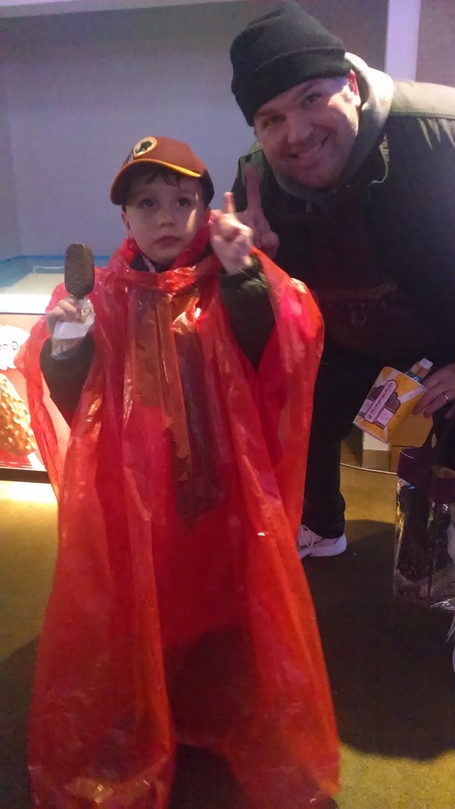