After the hatchet job done by the rating wizards at EA Sports this season, Harrison plans to turn the Redskins around in 2014 - one simulation at a time.

To follow along/join me - xbox 360 live league name: hogshaven14 - and my gamertag if you want to play is "harrisonweinhol"

I'm one of those Madden players that spends hours on end simulating season in franchise mode, tweaking and molding my roster into a perennial champion. I will play the occasional online matchup against a faceless foe here and there but the bulk of my Madden time is spent scouting draft prospects and negotiating contracts.

You can imagine my satisfaction as I watched my Redskins draft a mobile, rookie quarterback who would go on to be the most dominant player in the game since 2004 Michael Vick. By the end of 2012 the Madden ‘13 Redskins were rated 89 overall (perhaps even 90 - the servers update the rosters every week based on performance, if you didn't know - more on this later.) and online opponents would literally refuse to play you if you played with RG3 and the Redskins.

It was like "Wolf of Wall Street". Wolf of Madden if you will.

We were riding high on a seven game win streak. Inflated ratings all over the place. You couldn't lose if you ran read option with Alfred Morris and then hit Garcon or Moss over the middle with play-action. It was just like in real life. The Redskins weren't just good because I traded for stars and padded the roster with over-the-hill free agents - Shanahan had hit on penny stocks likes Alf and they were racking up returns. The Madden rating powers that be were bullish on Redskins stock.

The bullishness lasted through RG3's ACL recovery and through the summer when Madden 25 came out: 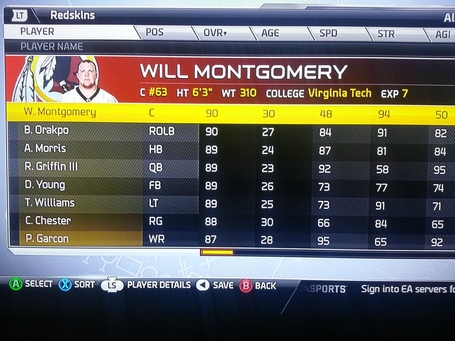 With an overall rating of 86, the Madden 25, 2013 Redskins were led by Will Montgomery and the Redskins offensive core. The 9th, and 10th spots were rounded out by Kerrigan (87 ovr) and Fred Davis (86 ovr). The 11th highest rated man on the team in August was Josh Wilson (83 ovr).

As the season played out, we watched as the team fell apart. The market was selling hard and fast on the dream of RG3's second year and the 2013 Washington Redskins. By December, the Redskins had hit their lowest point - at 74 overall rating and virtual unplayability.

You literally can no longer play with the Redskins. The updates to the roster as Shanahan drama unfolded were so brutal that your go-to plays no longer worked. Your kick and punt coverage were literally as bad as they were in real life WHICH WAS VIDEO-GAME BAD TO BEGIN WITH. Your defense couldn't stop anyone. If you weren't able to get Alf and Robert going - you played from behind the whole time and threw picks. It wasn't even this bad with Rex and John Beck at QB in Madden ‘12.

Here is the top 10 of the roster as it stands currently. Somehow we have more guys on defense that have risen up to be the leaders in the clubhouse. The 9th best player is Chris Chester and the 10th is Robert Griffin with a rating of 84. 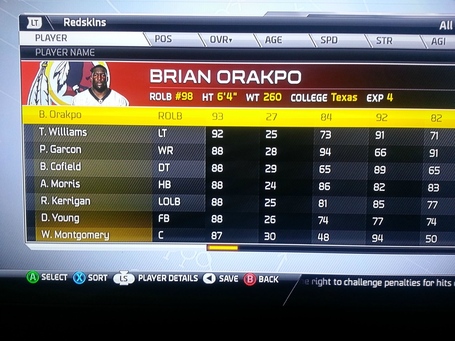 What you don't see is how bad the rest of the wide receiver and tight end situation is - neither position with a player in the 80's with the exception of Garcon. The defensive line, corners and safeties are all awful. London Fletcher is a 78. For those of you who still play with the Redskins online, please provide some insight into your situation because I can't do it anymore.

So this is where my work begins. I will take over as Dan Snyder in an online franchise for all to participate in (League name: hogshaven14) and watch. I will first simulate through the 2013 season with the current roster, making no changes and then begin the dismantling and rebuilding of the franchise with Jay Gruden.

I'll give weekly updates and commentary on the situation throughout this offseason. I'll put different roster moves up to votes and have discussions over beer prices even. I know we can't do anything about the fact that Bruce Allen thinks we should keep Jim Haslett around in real life, but at least in Madden we can control our own destiny.

This is what I've resorted to. This might be the lowest I've ever sunk as a Redskins fan.