Coach Gruden is assembling his assistant coaches, retaining some coaches from last season, calling upon some familiar faces from the past, and adding some coaches new to Washington.

Share All sharing options for: Jay Gruden's Coaching Staff is Coming Together

The Gruden regime has started, and he is still sorting through the 350+ text messages he has received from various coaches in the college, NFL, UFL, AFL, CFL, BFL, and Estonian Basketball coaching circles.  Newly empowered General Manager Bruce Allen fired eight coaches on Dec 30th.  This included Head Coach Mike Shanahan which caused random celebrations thoughout Redskins Nation.  On January 13th, Jay Gruden told three more coaches they would not be a part of his coaching staff next season.

Reports and confirmations are starting to be released about coaches that are staying, being promoted, and being hired from outside of the organization.  We'll look at some of the former Redskins coaches that Jay Gruden is bringing back to help coach the team next season and beyond.

Haslett has officially been retained as defensive coordinator, and Jay Gruden is reportedly considering extending his contract past this season.  There were reports that Gruden was interested in hiring DL Coach Paul Guenther from the Bengals, but he decided to accept a promotion and become the Bengals DC instead.  Fans will question why the key figures in an underperfoming defense remain in place.  Gruden's history and comfort level with these coaches plays a large part in these decisions.  Haslett has been able to bring in his LB coach, and will be able to run the defense his way.  There is no one left to blame if Haslett's defense does not improve next season, and his short leash with the fanbase is all but gone.

Morris has signed a new contract with the Redskins and will keep his position as Defensive Backs Coach.  The secondary has underperformed under Morris' watch and he has had to deal with player suspensions, injuries, and a lack of talent at the positions.  The majority of players who saw playing time last season are slated to be free agents this year, so expect to see some major changes in the secondary in 2014.

Burney is one of the few coaches that Mike Shanahan brought with him from Denver that has been able to stick with the team following the purge.  Burney has been coaching defensive lines since 1983, and looks to be spending his 31st year coaching them with the Redskins.

Sean McVay is very young at 27, and has been the Redskins Tight Ends coach for the last 3 years.  Previously he was an Offensive Assistant with the team.  On January 15th he was officially announced as the next Offensive Coordinator for the Washington Redskins, replacing Kyle Shanahan.  Jay Gruden has already stated that he will be calling the plays, so the extent of McVay's influence on the offense is still not clear.  Reports from players and coworkers indicate that McVay is a bright young football mind, and he was mentioned as a potential head coach in the league. McVay will also serve as QB Coach for the 2014 season.

Foerster has been coaching offensive lines for a long time(30 years), and has spent the last four season coaching them for the Redskins.  There are a lot of questions about what kind of scheme Gruden will be running, how quickly we can replace everyone to the right of Trent Williams, and whether any of our backup players are worth keeping/starting.

Former safety at Wisconsin who joined the Redskins last year as an offensive assistant.  Previously worked for the University of Michigan as an assistant defensive backs coach, and interned with the Cleveland Browns.

Ben Kotwica became the New York Jets Special Teams Coordinator last season after several years as an assistant under Mike Westholf.  The Jets ST unit was ranked 10th in DVOA by Football Outsiders last season. The Redskins ST unit was ranked 32nd, and the 2nd worst unit in the history of recorded time.  While you can't technically say it can't get any worse than last year, it's really, really close to being true.

Redskins fans ya wanna learn about your new Special teams coach Ben Kotwica. Enjoy some work from my colleagues. http://t.co/V6t0z22Ab7

Brian Baker has been coaching linebackers and the defensive line for 30 years, and got his start in coaching at Maryland working with outside linebackers.  That will be his role with the Redskins as he was named the Outside Linebackers Coach and will presumably be working with Haslett to get the most out of Ryan Kerrigan, Brandon Jenkins, and possibly FA's Brian Orakpo and Rob Jackson.  His last job was working under Ray Horton for the Cleveland Browns in the same role.

Kirk Olivadotti has reportedly agreed to return to the Redskins to be the Inside Linebackers Coach under Jim Haslett.  Olivadotti was part of the Redskins defensive coaching staff from 2000-2010, leaving to be the ILB coach at Georgia for the last three seasons.  Haslett has reportedly tried to bring him back to the Redskins in previous years, but been denied the ability to replace Bob Slowik.  Olivadotti will have plenty of work to do, with not much currently on the roster to work with.  There are currently two ILBs under contract for the 2014 season, Keenan Robinson(injured) and Will Compton(UDFA rookie).  Perry Riley and Nick Barnett(injured) are slated to be UFA, and London Fletcher has announced his retirement.

Wes Phillips is the current Tight Ends Coach for the Dallas Cowboys, and the son of former Cowboys coach Wade Phillips.  He has only been the TE coach for one year, spending the previous six seasons with the Cowboys as an assistant offensive line coach.  He also has history as a quarterbacks coach at West Texas A&M for two years and Baylor for one year.  Phillips was a quarterback at UTEP.

In case there was any doubt, two people confirm the proud papa's tweet: #Redskins indeed have hired Wes Phillips to coach TEs.

Another former Redskins' coach that is returning to the team.  Hilliard was the team's WRs coach in 2012, and served the same role with the Florida Tuskers when Jay Gruden was there.  Gruden has stated that he wants to bring him back to Washington to work with a wide receivers group that only has one true star in Pierre Garcon.  Leonard Hankerson is entering his contract year and is recovering from a torn ACL.  Aldrick Robinson is a RFA this year, and could use guidance to improve his overall game.  Nick Williams is another receiver under contract who is in position to try to win the slot receiver role next year.  Jay Gruden is expected to add some new talent either through the draft, FA, or both, and Hilliard will be the guy that will be tasked with getting them ready to play here.

Randy Jordan has spent the last 2 years as the running backs coach for the University of North Carolina.  He previously held the same job at Texas A&M for 4 years, and at Nebraska for 4 years before that.  He started his coaching career as a special teams assistant for the Oakland Raiders.  Jordan coached current Redskins RB Roy Helu Jr during his freshman year at Nebraska.  He also coached Giovanni Bernard at UNC, who was the 2nd round pick last year for Jay Gruden's former team, the Cincinnati Bengals.  During Jordan's NFL career as a RB, he played for the Raiders during Bruce Allen's time there as General Manager.

Shane Day is expected to join the #Redskins as an assistant on the offensive side of the ball, source said.

Here is a look at the shared coaching history of some of the key figures who have been retained by the Redskins organization to work with Jay Gruden. 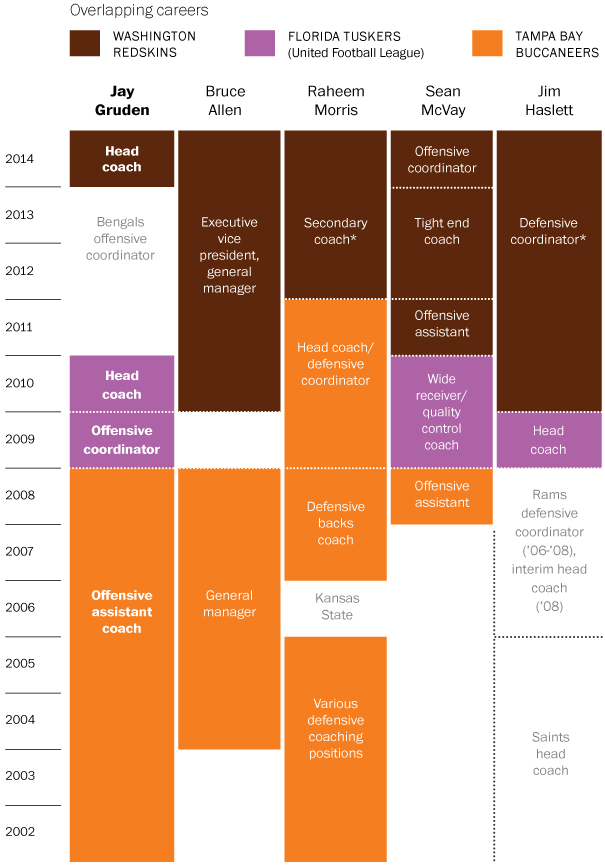