Six Questions on Redskins vs Eagles Week One with Jimmy Kempski

Philly.com Eagles writer, Jimmy Kempski, was at Eagles training camp every single day. Who better to answer my questions and concerns on Chip Kelly's offense working in the NFL and the likelihood the 3-4 defense transition will go smoothly?

Share All sharing options for: Six Questions on Redskins vs Eagles Week One with Jimmy Kempski

Special thanks to JimmyK for taking the time to answer our questions and congratulations on his new gig at Philly.com.

1.) With Chip Kelly's up-tempo offense, am I wrong to think it will struggle mightily this first season since Kelly inherited an offense line that has three guys near or over 30 years old and a declining Left Tackle that weighs 335 pounds?

Jimmy: Whoa... hang on. Peters is coming back from a double ruptured Achilles, so there's a very good chance his play might fall off, but there's nothing yet on tape that says he's in decline. The last time he was on a football field, he was arguably the best OT on Earth.

As for the other guys, the Eagles' OL is extraordinarily athletic.

Todd Herremans is athletic enough to play 4 of the 5 positions along the offensive line, and he'll be asked to play the position requiring the least amount of athleticism, at RG. He is by far the least athletic of the Eagles' offensive linemen.

Jason Kelce is probably the most athletic C in the league. Since 1999, 132 centers have competed at the Combine. Here is how Kelce compares: 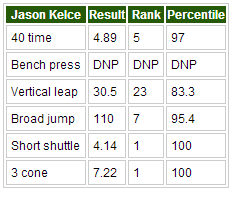 At RT, the Eagles have thee 4th overall pick in the draft, Lane Johnson. If you all followed the Combine this year, you saw Johnson kill it. Since 1999, 343 offensive tackles have competed at the Combine. Here is how Johnson compares: 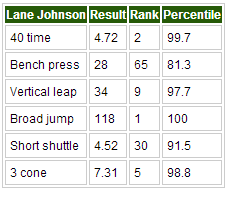 And then people don't realize this, but Evan Mathis probably had the best Combine of them all. Since 1999, 295 guards have competed at the Combine. Here is how Mathis compares: 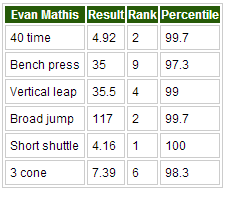 And finally, there's the aforementioned Jason Peters, who can do this, if healthy:

The one guy that worries me to some degree is Herremans, as he had a shaky preseason. Otherwise, I think Chip Kelly's offense is tailor made for this OL.

2.) It took the Redskins two and half seasons to get their 3-4 defense out of the gutter of the NFL rankings in a lot of statistical categories. Is it fair to expect the same results from the Eagles who also will be moving dedicated DEs to LB positions?

Yep, it's going to take a while. The DL has been completely re-made and is deep and young, but might take some time before they're a true strength. The DL will be fine going forward, as will the ILB's in DeMeco Ryans and Mychal Kendricks. Kendricks should actually flourish in the 3-4, as he'll get more opportunities to blitz, which is something he is great at.

But as you mentioned, the OLB position is a mess. Connor Barwin is a legit 3-4 OLB, but Trent Cole and Brandon Graham are square pegs in round holes. It's a bummer for Graham, who has talent, but is completely out of position. Opposing offenses are going to try to find ways to get Cole and Graham in coverage, and if they can, it won't be pretty.

3.) Guys like Nick Saban and Steve Spurrier only got two seasons before they were canned and returned to college. Has the Eagles front office shown they're willing to give Chip Kelly at least the better half of that 5-year contract to build a roster to his liking?

The Eagles gave him a 5 year deal worth $32.5 million, which makes him the 9th highest paid coach in sports. So yes.

Well, Spurrier and Saban got 5-year deals with their respective NFL teams too. Snyder certainly backed up the cash truck for him, too.

4.) I was watching NFL Network when the Chip Kelly deal went down and Charley Casserly was pounding his fist Kelly's system would fail in the NFL citing six reasons why. I think they all make a lot of sense when put together. Give me two replies to Casserly...one with homer hat on and one with it off (maybe it's the same).

OK, first, this one:

"Oregon is known for their tempo. I don't know if he can get million dollar guys to practice at that tempo and convert that into an every down tempo."

"NFL defenses are just as fast as offense....the speed factor is lost."

I want to be careful not to put words in Casserly's mouth, but that statement sounds an awful lot like the myth that Oregon was some sort of recruiting juggernaut.

Rivals.com is a network of websites under the Yahoo umbrella that was started in 1998 and employs over 300 people. Every year, they rank the top 100 high school football recruits in the nation. Over the last four years (Chip Kelly's entire tenure as Oregon's head coach), Oregon has attracted 10 Top 100 high school recruits. Those players are listed below: 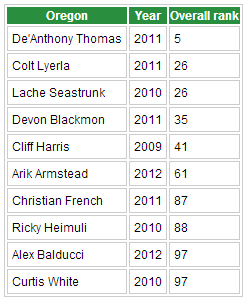 But it's not like Oregon has been raking in the cream of the crop like the USC's, Florida's and Alabama's of the world. For example, Pac 12 rival USC raked in 32 Top 100 recruits in the last 4 years, more than triple Oregon's total: 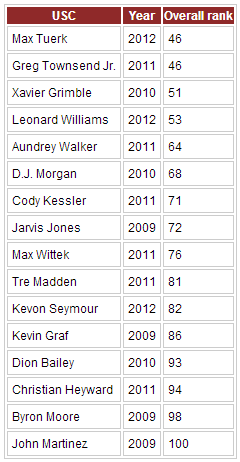 Let's do some other Pac 12 programs. Anyone think of UCLA as a big time football program? They were able to get 11 Top 100 recruits over the last 4 years, one more than Oregon: 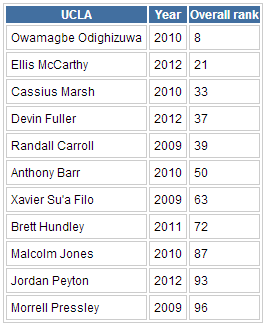 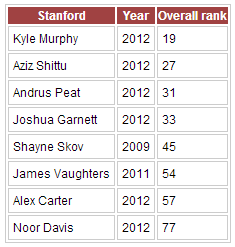 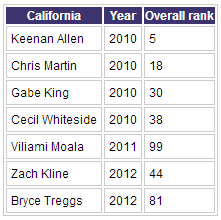 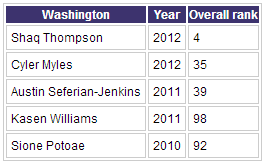 So here's how the Pac 12 looks in terms of recruiting over the last 4 years: 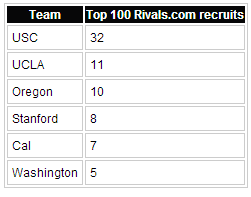 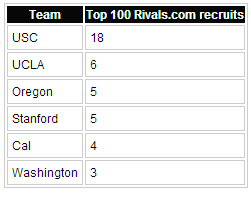 So was Chip Kelly really getting the cream of the crop, or did it just seem that way because Oregon steamrolled so many opponents during Kelly's tenure?

5.) I'm pretty much obsessed with Nate Allen's progress given he was the Eagles 2nd round draft pick in the McNabb trade the Redskins got fleeced on. What's his progress and how would you rank the Eagles secondary as a whole?

It appears that Nate Allen will be splitting time this Monday with 5th round rookie Earl Wolff, soooooo... Yeah. Nate has not been good, and I'm not optimistic that he'll magically get better. The Eagles' other pick from that trade was Casey Matthews. Allen and Matthews are probably the two biggest punching bags for the Eagles' fan base, so you can go ahead and feel slightly better about that fleecing.

The Eagles' secondary as whole isn't good either. Cary Williams and Bradley Fletcher are both physical corners, so I actually like them against opponents like the Redskins, who love to run those stretch plays that soft corners hate defending. But how well those guys cover is another story. To be determined...

Safety is a mess, just like it is for all the NFC East teams. Patrick Chung had a good camp, and looks competent, but there's a reason Bill Belichick got rid of him, so we'll see.

The one player I have complete confidence in is slot corner Brandon Boykin. He can play.

6.) For the 100% of Redskins fans that missed the Eagles pre-season games, what's a quick recap of how they look going into week 1. Any surprise starters?

Nah, no surprise starters. They're going to be fun to watch, and they're going to score. Unfortunately, they'll probably be outscored more than they'll outscore.

Thanks again, Jimmy. Hopefully we can catch up Monday night at the game.