As the Eagles transition from a 4-3 to a 3-4 defense, they could experience some bumps along the way. Last seasons number one rushing attack, the Washington Redskins, will look to exploit any holes it can find.

The offseason changes to the Philadelphia Eagles offense have been well documented with the arrival of Chip Kelly. But there have been changes to the defense as well, which have gone somewhat under the radar. Kelly decided to transition his defense from a "Wide 9" 4-3 defense, to a 3-4 defense. Mike Shanahn also moved from a 4-3 to a 3-4 when he was hired as the Redskins Head Coach, and it took the Redskins roughly three years to make the switch.

That's not to say definitely that the Eagles will also take three years, but from what we saw in preseason, they will struggle to defend the run as they adjust. We saw how bad a 3-4 defense can be without the correct personnel, and the Eagles look set to have the same struggles. Their defensive line have really struggled to hold their positions at the point of attack in preseason.

Here's the first play of the Patriots game 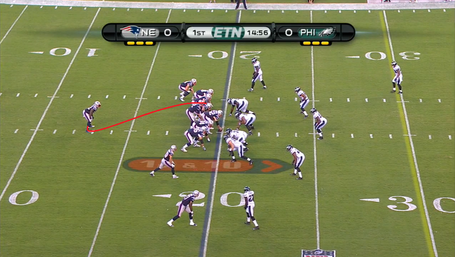 Here, Steven Ridley is going to take a step to his right, before taking the hand off to the left side of the line. 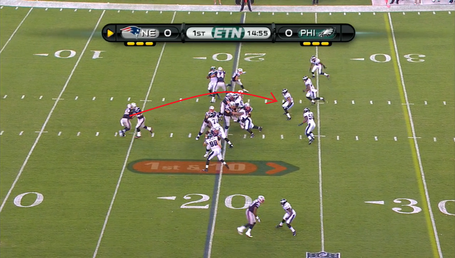 As Ridley takes the hand off, all three defensive linemen for the Eagles have been angled away from the run. That creates a huge lane for Ridley to run into, which the linebackers are slow to recognize. 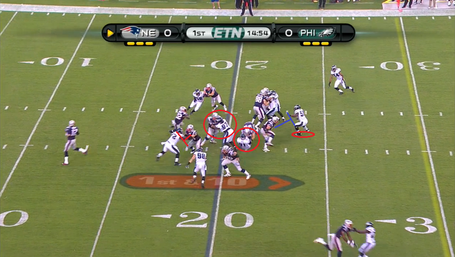 As Ridley approaches the hole, you can see just how poorly the Eagles front seven has defended this run. One defensive end is blocked to the ground, while the other has gotten up field, but is easily cut off from the play. The nose tackle is blocked by just the center and is also cut off from the play. Linebacker DeMeco Ryans doesn't attack the hole, instead waiting for the runner to come to him. That allows a blocked to work back and cut him off. 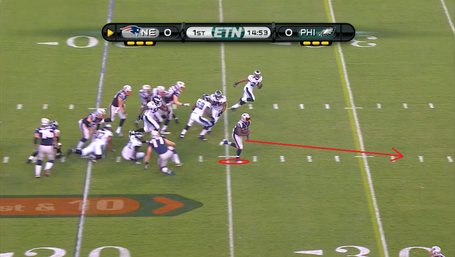 Ridley is through the entire front seven without having been touched. He's eventually caught from behind, but not before picking up 62 yards on the play.

But that was just the first play of preseason for the Eagles, so here's a run from the Jaguars in the third week of preseason. 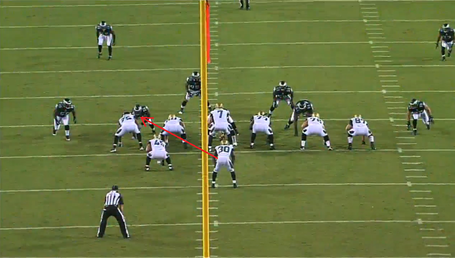 Here the Jags run a zone stretch play to the left, something the Eagles will see a lot of from the Redskins on Monday night. 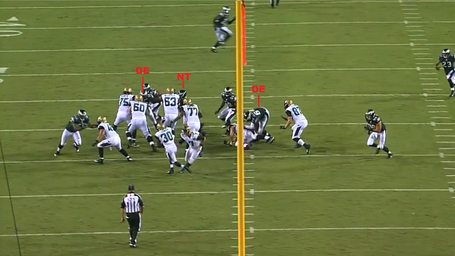 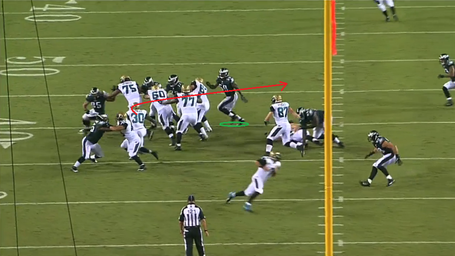 The back does a good job pressing the hole. Ryans over-pursuits the run and further opens up the cutback lane. 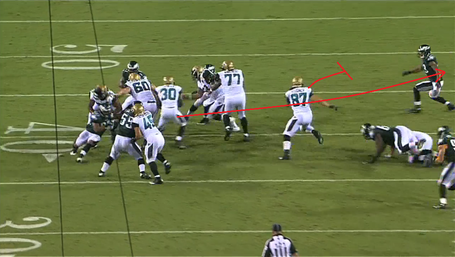 Ryans gets caught up in traffic as the runner cuts it back. One last block by the tight end on the safety allows the runner to spring free and take the ball 63 yards for a touchdown.

Obviously, those two big runs highlight the problem for the Eagles run defense, but it could be seen on a lot of plays. Too often the Eagles defensive linemen were easy to block in preseason and that puts a lot of stress on the linebackers. The Redskins were the number one ranked rushing attack in the NFL last season, and they shouldn't have too many troubles moving the ball on the ground against this defense.

One other thing to factor in is the tempo of the Eagles offense. If they fail to drive the ball down the field, then their defense will get very little time to rest between series. A three and out for Chip Kelly lasts all of 35 seconds. This defense has enough problems without factoring in fatigue. If the Eagles offense starts with a couple of bad series, the Redskins could literally run away with the game.