Starting this week and going through the rest of the NFL regular season, I will have a weekly contest in which I will make my game picks each Wednesday and invite you, the loyal Hogs Haven readers, to make your own picks in the comments section.

The rules are simple: I will incorporate the spread as determined by Las Vegas the Tuesday before the games and you can earn 1 point for each correct choice. I will add up the points at the end of each week, and if there is one clear winner who beats me, that winner will earn a fabulous prize that will then be mailed to them. There will only be ten contestants other than me, so the first ten responses will get in.

Each week the prize will change and some weeks there will be no winner at all, as I will have made the most correct choices or there is a tie among more than one of you. Simple right??

Baltimore Ravens (+8) at Denver Broncos: The Ravens get to celebrate their Super Bowl victory in 2012 by opening in Denver and getting shellacked on national TV by a motivated Peyton Manning and crew. Baltimore 10, Denver 24

New England Patriots (-10) at Buffalo Bills: In what can easily be deemed as the best quarterback matchup of the day, Tom Brady and the Patriots eke out a victory against the Jeff Tuel-led Bills. New England 31, Buffalo 3*

*There was late word this week that E.J. Manuel may play in the game if he can practice Wednesday. My prediction still stands.

Tennessee Titans (+7) at Pittsburgh Steelers: Pittsburgh has won ten straight home openers in the last ten years. That is until they run into Jake Locker and the Titans, at which point they will make it eleven. Tennessee 10, Steelers 21

Atlanta Falcons (+3) at New Orleans Saints: Even though he is now with the Titans, as a sign of good faith to the league Gregg Williams has promised Tutti Frutti sundaes this week to every Saint who plays a good clean game. Atlanta 28, New Orleans 21

Tampa Bay Buccaneers (-3) at New York Jets: This game has been canceled due to lack of interest. Both the Tampa and New York TV markets have agreed to run a repeat viewing of The Notebook in its stead. Tampa Bay 5, New York 0

Kansas City Chiefs (-3.5) at Jacksonville Jaguars: During halftime, Chief's coach Andy Reid will realize what he's done and will pull a Kool-Aid style jump through the locker room wall and never be seen again. The Jags win a stunner but unfortunately, all of the Jacksonville TV audience has driven to Tampa to catch The Notebook. Kansas City 10, Jacksonville 13

Cincinnati Bengals (-3) at Chicago Bears: Brian Urlacher has divided the Bears locker room even in retirement as some players think he is great on the new Fox Sports 1 channel and others think he talks too fast. Cincinnati 17, Chicago 21

Miami Dolphins (PK) at Cleveland Browns: Instead of the game, CBS has decided to just air footage of Ryan Tannehill's wife sitting in her seat at the stadium for three straight hours. Miami 14, Cleveland 17

Seattle Seahawks (-3) at Carolina Panthers: In another amazing display of awesomeness, Seahawk's golden-boy quarterback Russell Wilson is swimming from Cuba to North Carolina and will join his teammates at the stadium right before game time. Seattle 27, Carolina 21

Oakland Raiders (+9.5) at Indianapolis Colts: Reports are that Terrelle Pryor laughed uncontrollably when he found out he was starting this week at quarterback for the Raiders. Then he got sad. Oakland 3, Indianapolis 21

Arizona Cardinals (+4.5) at St. Louis Rams: Old school St. Louis sports fans are split this week, as some feel Mike and Ike should have stayed separated and others are glad they patched things up. Arizona 14, St. Louis 21

New York Giants (+3) at Dallas Cowboys: I have drafted Cowboys running back DeMarco Murray in two of my three fantasy football leagues to ensure that he will have a horrible and injury-plagued season. New York 17, Dallas 10

Philadelphia Eagles (+3.5) at Washington Redskins: The Redskins reportedly kept Pat White on the 53-man roster this week to play Mike Vick in practice. Several defenders, however, found his performance unconvincing and White later admitted he was having trouble "finding his motivation". Eagles 14, Redskins 28

Houston Texans (-4) at San Diego Chargers: Expect a veritable parade of overused 1980's catch phrases and historical references as Chris Berman calls this matchup in which the Chargers will be going for their 400th regular season franchise victory. Houston 17, San Diego 10

So those are my picks. The prize you are playing for this week is: 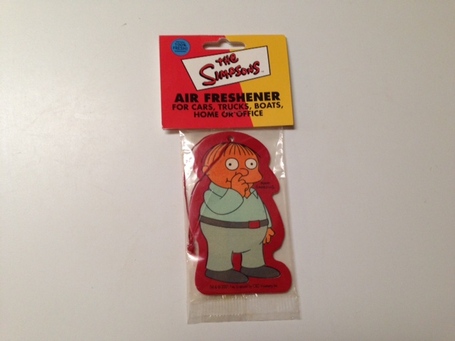 That's right - it's the Ralph Wiggum air freshener you never knew you wanted.