What Happened On Robert Griffin III's Interception Vs Detroit?

Robert Griffin III's latest interception originally looked to be a reckless decision and a poor throw, but Mike Shanahan argued otherwise after reviewing the film. Let's take a look at what really happened on that play.

Share All sharing options for: What Happened On Robert Griffin III's Interception Vs Detroit?

Washington's star quarterback Robert Griffin III has struggled to perform to his own high standards through the first three weeks of the season thus far. During his rookie campaign, Griffin only threw five intercepts throughout the entire season. He's already thrown four in three games this year as he readjusts back to the NFL after recovering from his knee injury.

His latest interception against Detroit came under scrutiny as he appeared to recklessly throw the ball as he was being pursued to the sideline by a Lions defender. Head Coach Mike Shanahan said he believed the same thing himself during the game, but claimed it wasn't Griffin's fault after reviewing the film. So what exactly happened on the play?

It's first and 10 on the Lions 19 yard line. Robert Griffin III lines up under center and fakes a hand off to Alfred Morris before rolling out on a bootleg. Coming out of the fake, Griffin has receiver Leonard Hankerson open for a quick and easy completion. 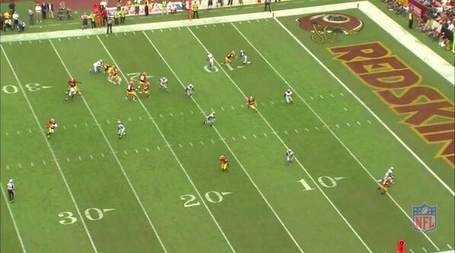 But Griffin obviously felt like he could get more. He knows that Pierre Garcon is running a deep comeback route against one on one coverage if he can buy himself enough time. So Griffin turns down the throw to Hankerson in favor of a potential bigger gain. He attempts to run past Lions defender. 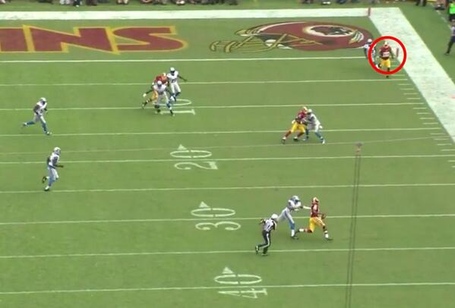 But Griffin can't run past defenders with the same explosiveness he did during his rookie season having recovered from his off-season knee surgery. The Lions defender managed to catch up with Griffin, forcing him to throw early. Griffin can see down the field he has Garcon running back down the sideline towards him. 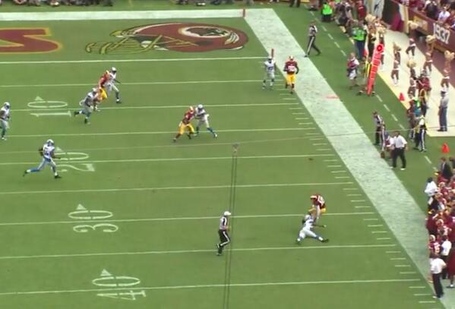 Griffin puts the ball in the air as he's dragged down. The Lions defender managed to pull Griffin back enough, but remove his hand in time to avoid a horse-collar tackle penalty. By this point, Garcon appeared to have given up on the play. Garcon has voiced his opinion recently that Griffin isn't completely healthy, maybe that played on his mind making him think that Griffin couldn't or wouldn't make the throw. He jogged back, casually stepping out of bounds while cornerback Chris Houston broke on the ball. 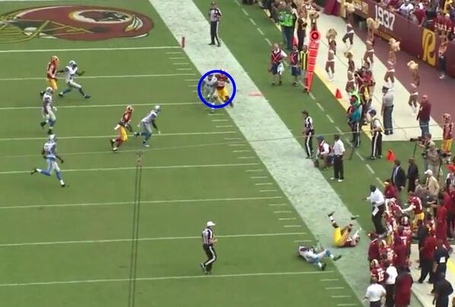 Garcon makes a last ditch effort to get back in-bounds but can't stop Houston from intercepting the pass.

Sure, Griffin could have avoid all this by simply dumping off to Hankerson as soon as he came out of his play-action fake. But what makes Griffin great is that he is always looking for the bigger play. We didn't complain last year when Griffin bypassed a dump off to Darrel Young in the flat to work all the way back to Fred Davis on the opposite side of the field against the Saints. The Griffin of last year probably would have been able to out-run the pursuing defender and buy himself more time or run for a couple of yards.

In one way, it's a positive that Griffin is still in a similar mindset to last season that he can make those plays, even if his body isn't able to just yet. But at the same time, he needs to be realistic. He should be willing to take what the defense gives him. Jon Gruden made a great point to Andrew Luck a few years ago during the famous "Gruden's QB Camp" segment during the build up of the 2012 NFL Draft. Gruden showed Luck film of a play Luck ran all the time in college, Spider 2 Y Banana. The fullback always found himself wide open and Luck had an easy dump off for positive gains. But then Gruden played tape of Luck passing up on the fullback and throwing to a stop route on the backside of the play, where he was intercepted. Gruden drilled home the point of working within the offense and not always needing to make the special plays. He and Luck used the phrase "you can't go wrong taking a profit", which is something I think Griffin could use with sometimes.

As for Garcon, he may not believe his quarterback is 100% yet, but that doesn't excuse jogging back to the ball when the play is still alive. If anything, he should be putting in more effort to help pick up his quarterback while he works his way back to the Robert Griffin III we knew last season.