The Eagles showed off one of Chip Kelly's new packaged plays in preseason, but that gives the Redskins a chance to study and learn how to defend it.

When the Philadelphia Eagles hired Oregon coach Chip Kelly to replace Andy Reid, the Redskins knew they would have to prepare to deal with an up tempo offense with plenty of new looks (at least, new to the NFL). In preseason, the Eagles put one of their new packaged plays on display. These 'packaged plays' are play that combine a run and a pass option all into one play. We saw the Redskins run their own packaged plays last season, but Chip Kelly and the Eagles have their own concepts.

One of those concepts was used in the first week of preseason against the Patriots. The Eagles would show a double stack look, with two receivers on either side of the field, one lined up slightly behind the other. 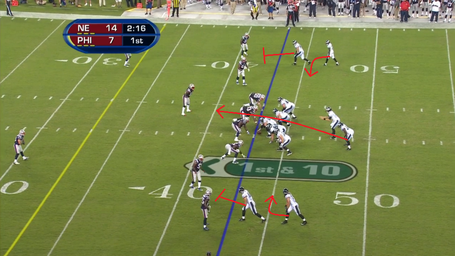 Out of this look, the Eagles quarterback, in this case Nick Foles, can either elect to hand off the ball or throw a screen to either side of the field. His choice depends on the look he's given by the defense. Chip Kelly loves to play a numbers game with his opposing defenses. If the defense honors the passing threat, as they do here, they leave just five defenders in the box to defend the run. 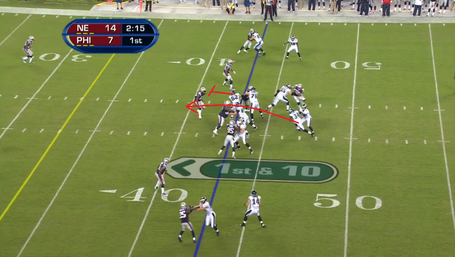 The numbers don't add up, five defenders should (in theory) be occupied by five blockers, leaving nobody to tackle the running back. Kelly will run the ball in that scenario every time. The back will have picked up four or five yards before either safety is able to close the distance, which a defense cannot allow to happen consistently.

The other option for the Eagles on this play is to throw a screen. Should the defense stack the box against the run, the quarterback will pull the ball and throw the screen. 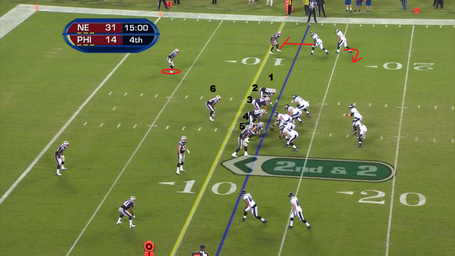 This time, the Patriots line up with six defenders in the box, giving them an extra defender to make the tackle on the running back. However, to do this, they have to take a defender from the outside. At the top of that picture, you can see the Patriots only have two defenders, a corner and a safety, to cover the screen. 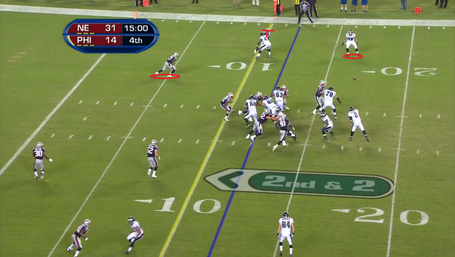 That look tells the quarterback to throw the screen. The receiver lined up on the line of scrimmage will block the initial defender, giving the other receiver space to take on the safety one on one.

The Eagles saw success using this play, picking up plenty of yards and two touchdowns to go with them. But the Patriots did manage to show a way to stop it. 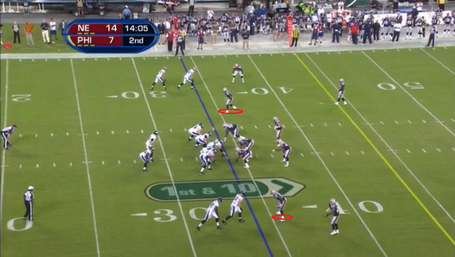 On this play, the Patriots line up with three defensive linemen, who shift inside to clog up the middle of the field. They have two edge defenders, circled in red, who are both lined up outside to force the quarterback to hand off. 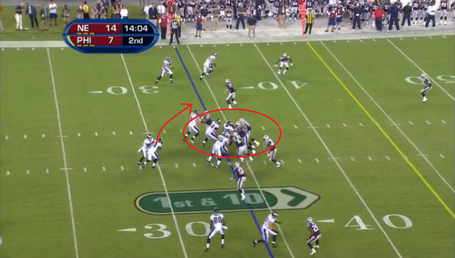 At the last second, the Patriots shift their edge defenders inside towards the run. But Foles pre-snap read told him to hand off, which he does. The five defenders in the box clog up the middle of the field, forcing the running back to bounce the run outside. 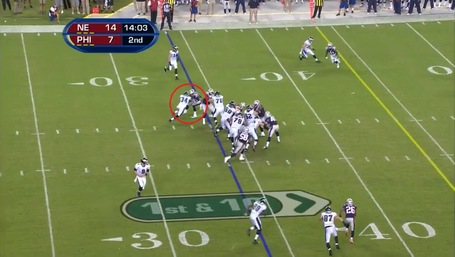 That allows the edge defender to come down unblocked and make the tackle.

That defensive look puts a lot of strain on the edge defenders, but luckily the Redskins have two very good athletes in Ryan Kerrigan and Brian Orakpo that can carry the burden. Should the Eagles run this play against the Redskins, I can see the Redskins using a similar tactic when it comes to defending it. Kerrigan and Orakpo would have to line up much further outside than they are accustomed to, but once they force the run option, they are left unblocked. The key will be forcing the running back to bounce the run to the outside and into the arms of either Kerrigan or Orakpo. Barry Cofield and Stephen Bowen will have to be strong at the point of attack and hold their gaps to allow that to happen.