The Eagles tested Roy Helu's ability to recognize and pick up the blitz on many different occasions. But he passed every test thrown at him, proving his worth as a third down back to the Redskins.

Share All sharing options for: Redskins vs Eagles: Breaking Down Roy Helu's Blocking.

It was tough to find bright spots in the Redskins 33-27 loss to the Eagles on Monday night. The story of Roy Helu Jr's return was forgotten after the Eagles offense and Robert Griffin III took the headlines. But Helu's return was significant to the Redskins. After a solid preseason where he proved he was back to full health, Helu looked set to be a change of pace back to spell Alfred Morris.

Helu was only given the ball twice, one of which was brought back for a holding penalty. The other he took five yards. He also had an 11 yard reception to his name. Hardly a performance that jumps off the stat sheet. But Helu filled an important role in the offense as a blocking back. When the Redskins went to their turbo offense Helu replaced Morris because of his abilities as a receiver and as a blocker. He did a good job not only recognizing the blitzes, but picking them up.

On of the first looks he saw was a safety blitz. 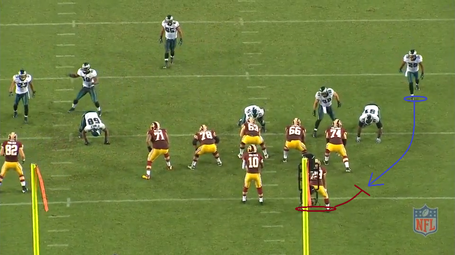 The safety approaches the line of scrimmage late, attempting to disguise his blitz. 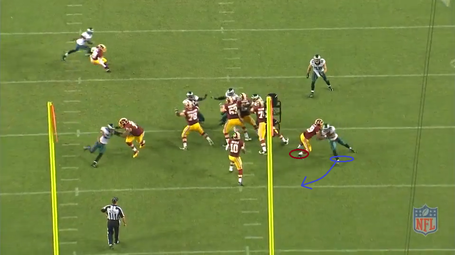 But Helu manages to pick him up and cut off his path to Griffin. 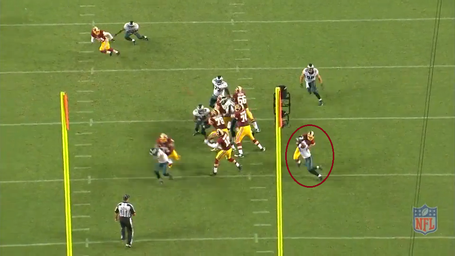 Helu then manages to run the blitzer past Griffin safely, without Griffin feeling any pressure.

The next look the Eagles threw at Helu was a double linebacker blitz. 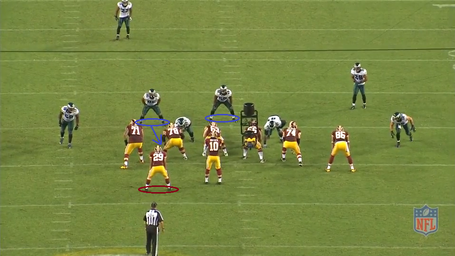 This time Helu is alligned to the left of Griffin. The Eagles send both inside linebackers into the same B gap, between left guard Kory Lichtensteiger and left tackle Trent Williams. 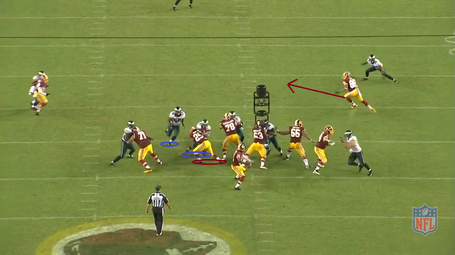 Helu meets the first linebacker head on and stonewalls him, giving Griffin enough time to find his hot route over the middle before the second linebacker arrives.

Later on in the fourth quarter, the Eagles sent DeMeco Ryans on back to back blitzes against Helu. 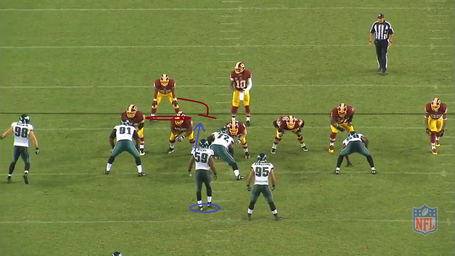 On this play Ryans attacks the A gap between center Will Montgomery and right guard Chris Chester. 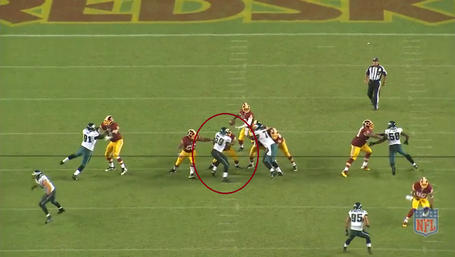 Helu uses his run up as momentum and crashes into Ryans. He sets his anchor and maintains the block long enough for Griffin to pull the trigger. 1-0 Helu.

On the next play Helu finds himself against Ryans again. 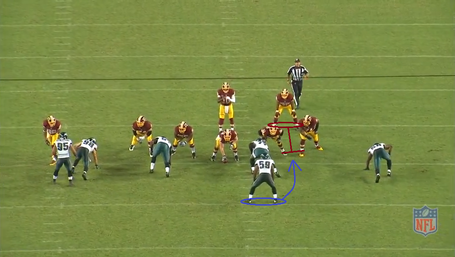 Ryans works back to the B gap this time. 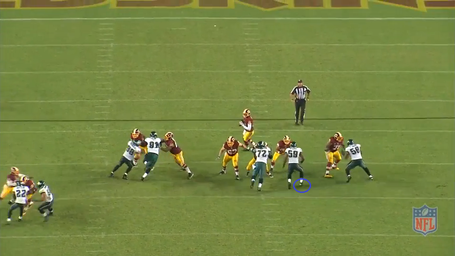 Ryans uses a stutter step to the outside in an attempt to catch Helu out of position. 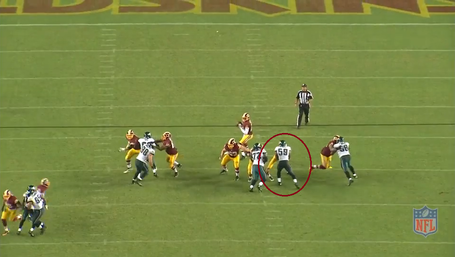 But Helu doesn't buy the fake and wins the block again. 2-0 Helu.

There's still enough time in the game for one more blitz from Ryans to try and get the better of Helu. 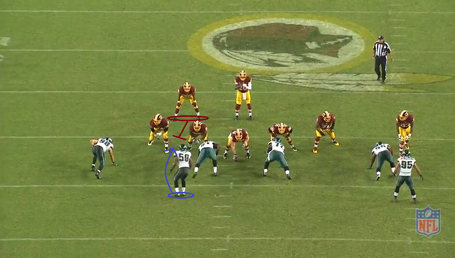 Ryans blitzes the other B gap on this play. 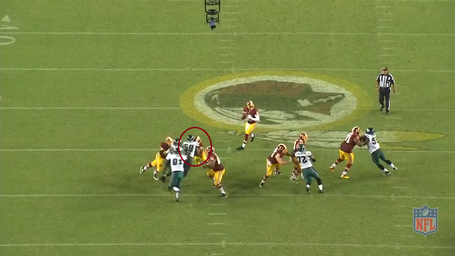 There's plenty of traffic in the B gap, but it didn't matter. Helu managed to block Ryans and allowed Griffin to get his throw away. That's 3-0 to Helu, all on the same drive.

Helu's ability and willingness to go in and block is of incredible importance to the Redskins. So many of their passing concepts work off a 6-man protection scheme that involves a back picking up a blitzer. As Helu proved on Monday night, he's capable of picking up the extra blocker and buying Griffin that extra second or two to make his throw. Add in his skills as a receiver and the Redskins have a very good third down back in the making.