We take a look at the All-22 coaches film to break down the performance of a "rusty" Robert Griffin III in his first game back from his knee injury.

Rusty. That was the word used by fans and media alike when referring to Redskins second year quarterback Robert Griffin III's performance against the Philadelphia Eagles on Monday night. Griffin was playing in his first game since suffering his knee injury against the Seahawks back in January. Having not participated in any of the four preseason games, Griffin was always likely to show some rust as he re-acclimatized himself to playing live NFL defenses. But Griffin refused to blame his performance on rust, claiming that was an excuse.

While he refused to accept it, there were plenty of signs of rust, which we'll get to. But he was right not to chalk it all up to rust. There were some throws that can't be simply put down to rust. His first interception was an example of a bad decision, not rust. 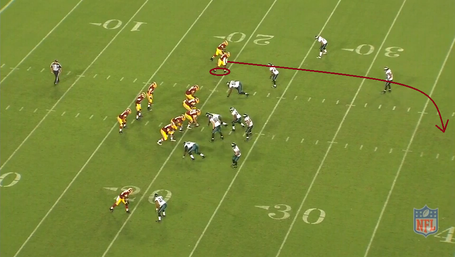 Santana Moss is lined up in the slot, running a deep skinny post route. 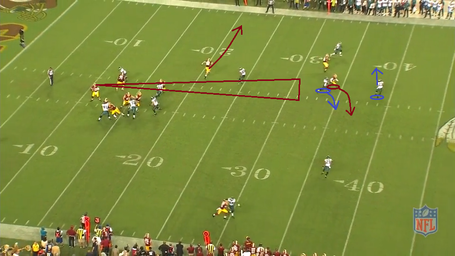 Griffin locks on to Moss early in the route and never looks off him. Moss is tightly covered by Eagles defender Brandon Boykin with a safety in the area. Griffin has tight end Logan Paulsen running out into the flat as a checkdown option, but decides to stay with Moss. Perhaps he spots the safety's hips facing towards the sideline, making it hard for him to adjust back to Moss. But even if that is the case, Boykin never lost track of Moss and had him well covered. 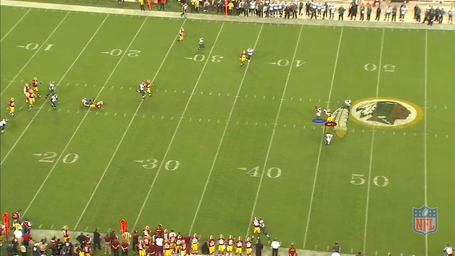 Griffin pulls the trigger and is subsequently intercepted. The throw was never on, but Griffin never looked elsewhere. That's not rust, that's a bad decision.

The signs of rust Griffin did show were with his mechanics. He struggled to get into rhythm in the first half, he was out of sync on a few throws. His second interception was a result of that. 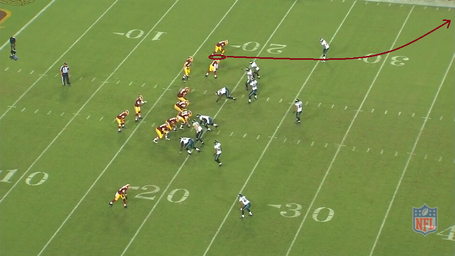 Wide receiver Pierre Garcon runs an out-breaking route at the top of the picture. 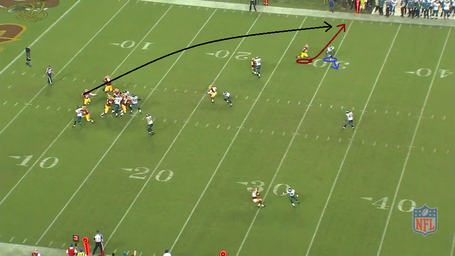 Cary Williams, the corner covering Garcon, is in a terrible position. His hips are facing the middle of the field as Garcon is about to break out towards the sideline. This is a timing throw, designed to beat the corner before he has time to react. Griffin throws the ball before Garcon makes his break, but the ball dies on him. 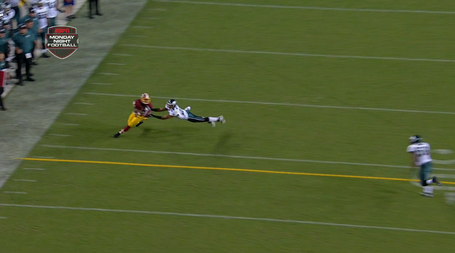 Cary Williams does a fantastic job laying out to make the diving interception. But if Griffin's mechanics are in full swing, there's no play for Williams to make. The ball would have hit Garcon's hands before Williams could do anything about it. 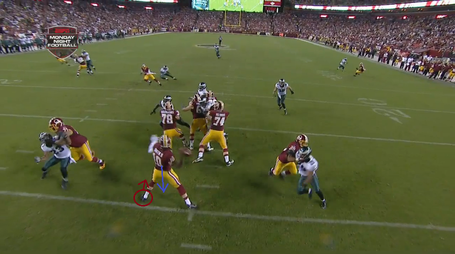 Griffin plants his front foot to his side instead of out in front of the direction he wants to throw. That causes his body to open up and his weight to fall backwards. 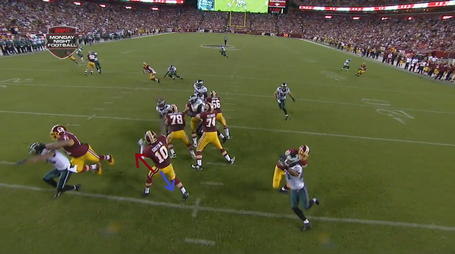 As he releases the ball, his weight should be transferring over his front leg to help give him velocity on his throw. But his foot placement doesn't allow him to do that. His weight never transfers and is causing him to fall away from the throw. That makes the ball die on him, and gives Williams the chance to make the interception.

Griffin improved gradually as the game went on. His best throws came late in the fourth quarter. 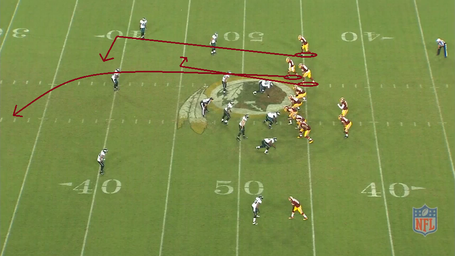 This play is designed to create space for Leonard Hankerson, who is running a deep in route. Santana Moss runs a deep route up the seam from his slot position to take clear the way for Hankerson to cut in behind him. 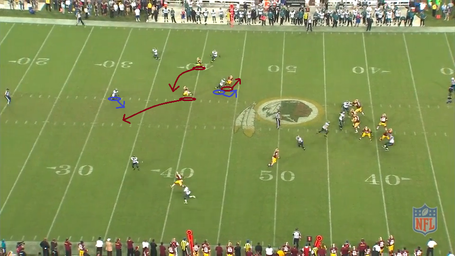 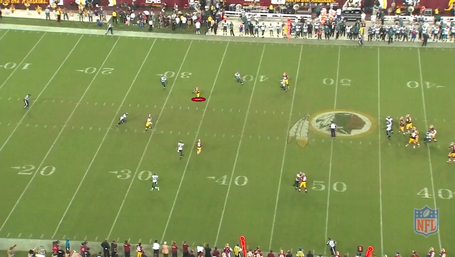 Griffin gets the ball out on time and on target, leaving the ball out in front of Hankerson to give him a chance to gain yards after the catch.

That throw was much more like the Robert Griffin III we saw in his rookie season. Griffin improved his performance through the course of the game, getting better with every snap he took. He looked a lot more like the 2012 Robert Griffin in the fourth quarter as the team rallied towards a comeback. But this is a process, as Griffin has always said. It'll take him some more time before he gets everything in sync, which the Redskins will have to try and work through. But I think they way he steadily improved is reason to be positive. If he can pick up where he left off against the Packers, then he'll find himself in good shape going forward.