Rookie second round corner David Amerson made his NFL debut on Monday night. Here we use the All-22 film to breakdown his performance.

While the Redskins suffered a disappointing 33-27 loss to the Eagles on Monday night, there were some bright spots in the performance. Redskins used their second round pick on corner David Amerson from N.C. State. Amerson was drafted for his ballhawking skills, but had some concerns with things like eye discipline in college. Amerson made his NFL debut on Monday night and put in a very promising performance.

One of the knocks on Amerson in college was his ability to support against the run. For a guy that is 6'2", 205 pounds, he wasn't strong against the run. He'd shy away from tackles and show poor form. But against the Eagles, he looked a completely different player. 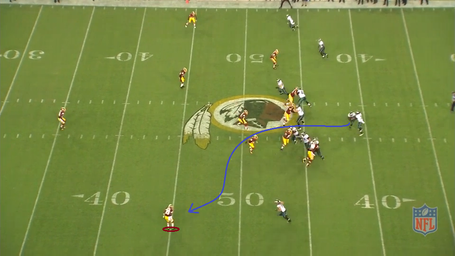 On this play, LeSean McCoy will make his way into the secondary and attempt to bounce his run outside of Amerson. 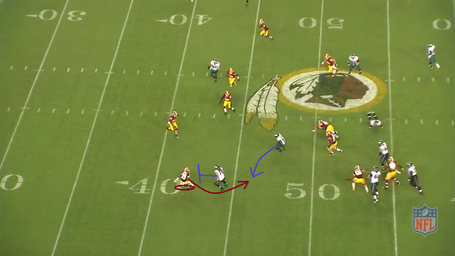 Receiver Riley Cooper looks to be in a good position to block Amerson and allow McCoy to get outside. 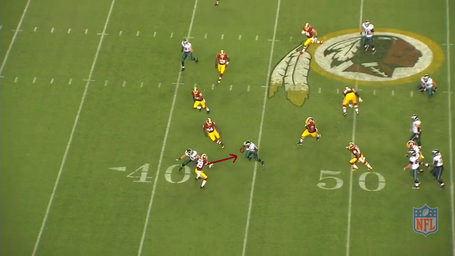 Amerson fights through a poor block attempt and gets himself in a good position to make a play on McCoy. 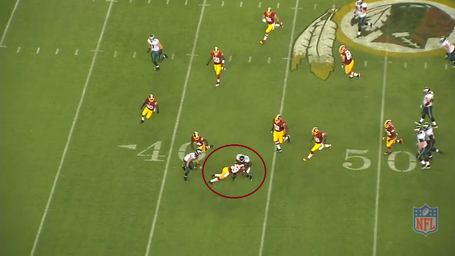 In preseason, Amerson routinely dropped his head before going into a tackle. But here, he keeps his head up and sees what he hits, which is incredibly important against shifty guys like McCoy. He manages to take down McCoy on his first attempt, something that the rest of the Redskins defense struggled to do all night.

Amerson made a few nice plays against the run, but ultimately was drafted to help sure up the secondary. His coverage was solid most of the night. 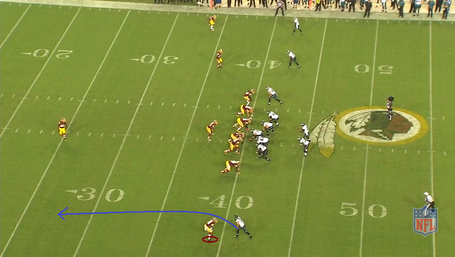 Here, Riley Cooper is running a go route. Amerson is playing him one on one, with fellow rookie, safety Bacarri Rambo, playing the deep middle of the field. 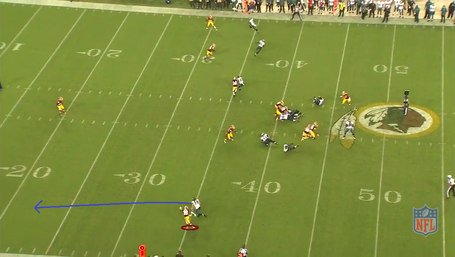 Amerson allows Cooper to get a free release but takes an outside leverage on him, funneling the play inside towards his safety help. 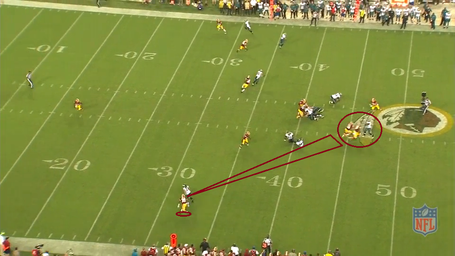 Amerson sneaks a look into the backfield and spots Michael Vick under heavy pressure. Vick is forced to rush the throw. 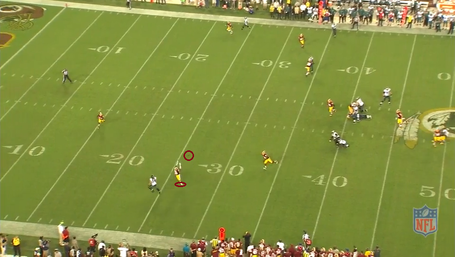 At that point, Amerson is only playing the ball. He undercuts the route and does a nice job attempting to high-point the ball. Amerson will be disappointed he couldn't come away with the interception, but he was awarded a pass break up as the ball was deflected incomplete.

There was only one play where I think Amerson made a mistake. 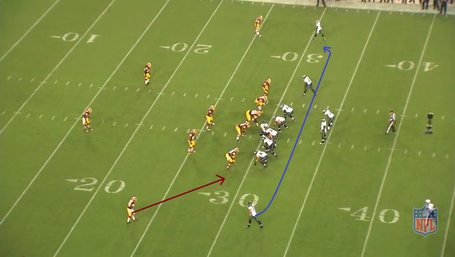 Here, the Eagles motion Cooper to the right of the formation, leaving Amerson with no receiver on his side of the field. 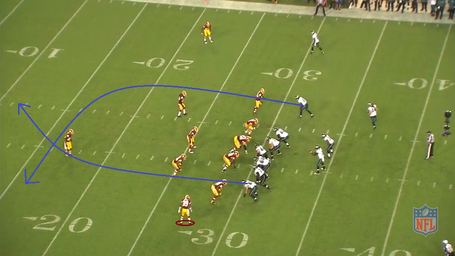 The Eagles are using their tight end to run up the seam, while receiver Jason Avant runs a deep crossing pattern. 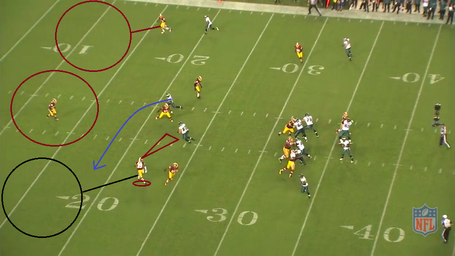 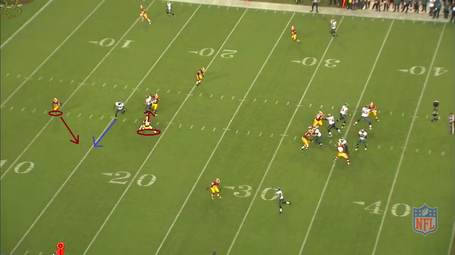 Rambo spots this mistake and comes down to cover the crossing route from Avant. 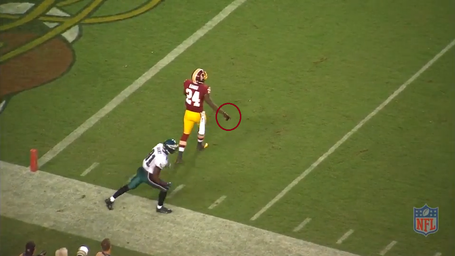 Luckily, Vick couldn't hit Avant and the ball fell incomplete. But immediately after the play, Rambo turned to Amerson and pointed, suggesting that he should have dropped into his deep third rather than followed the tight end. I'm not an expert, and it's near impossible to know exactly what the coverage scheme was without asking the players or coaches. So I could easily be wrong on that play, but that's how it looked to me.

But Amerson quickly got back to solid coverage. 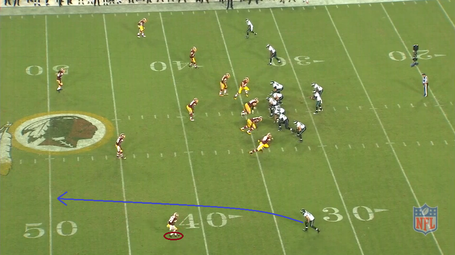 Amerson finds himself in off-man coverage against Cooper, who is running another go route. 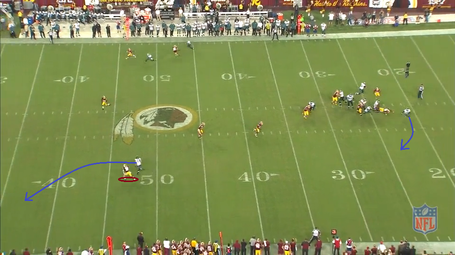 Vick is forced out of the pocket and Cooper begins to freelance. Amerson does a good job staying with him. 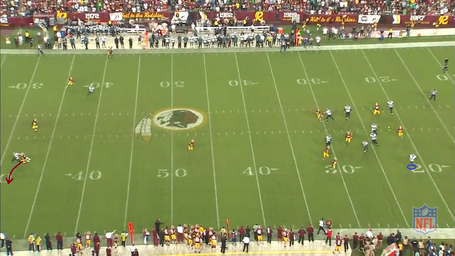 Vick puts the ball in the air. Amerson has secured the route and moves his attention onto the ball. Once the ball is in the air, Amerson plays the ball instead of the man.

Amerson chases the ball to the sideline, doing a great job to catch it. Amerson can't keep his feet in play, but you like to see him hunting for the ball and pulling in the catch.

Overall, it was a promising debut from Amerson. He has a few things to work on, but has a solid foundation to built from. He played most of the game across from Riley Cooper, who only managed two receptions for 14 yards (which Amerson couldn't really have done much about either reception). The Packers are going to throw the ball much more than the Eagles did last week. If Amerson slips up, Aaron Rodgers will take advantage of him. It will be interesting to see how Amerson holds up against Rodgers and if the Redskins will put him up against Jordy Nelson.