Eagles Head Coach Chip Kelly put one of his trademark Oregon plays on display last night: the Sweep Read. Here we break down how it works and what it's weaknesses could be.

We knew that when the Eagles hired Oregon Head Coach Chip Kelly, he would bring along some interesting plays along with the up-tempo offense that he made famous at Oregon. Last night, he introduced a new play to the NFL, the "Sweep Read". The sweep read was something of a trademark play for Kelly at Oregon. It's a read-option play that involves reading an unblocked interior defensive lineman, instead of an unblocked defensive end or outside linebacker. This is something we've yet to see much of in the NFL. 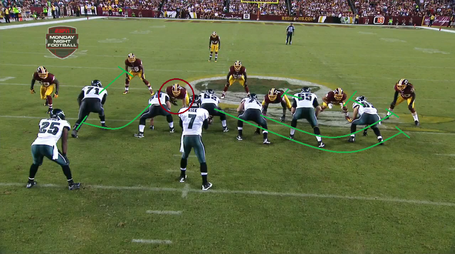 The play is a designed power run that calls for both the right tackle and the tight end to down block, allowing the center and the right guard to pull from their original position and act as lead blockers for running back LeSean McCoy. On the backside of the play, the left guard kick slides to meet the edge defender on the backside, in this case Brian Orakpo; which allows the left tackle to run into the second level and block a linebacker. 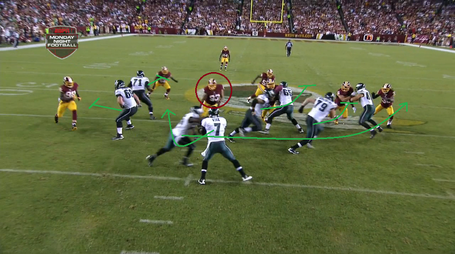 All of that action by the offensive line leaves the backside interior defensive linemen unblocked. Quarterback Michael Vick reads him just as he would a defensive end on a standard read-option play. If the lineman stays put, Vick hands it off; but if the lineman crashes on the run, Vick pulls it and runs himself. 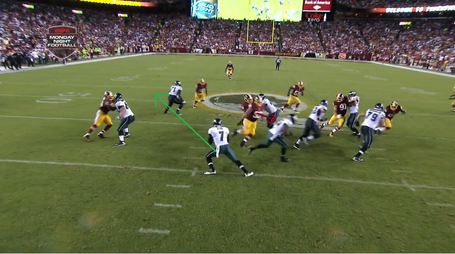 On this occasion, the lineman crashes, leaving a big running lane behind him for Vick.

This play is a little riskier than the standard read-option, because interior linemen have less distance to travel to the quarterback than edge defenders do. The last thing you could possibly want as a quarterback is a defensive tackle getting a free run up the middle at you, which is exactly the scenario this play could put you in.

The key to defending this play could be the edge defender on the left guard. Guards aren't typically known for their athletic ability to block edge rushers one on one. Brian Orakpo has to be able to beat the block of a guard and make a play here. To his credit, he drew a holding penalty, which negated the five yards Vick was able to pick up on his run. But I think there is a risk that the defense can force the quarterback to keep it and run straight into an edge defender like Brian Orakpo, who should be able to consistently beat a guard.

But overall, I like the play design. Defensive tackles typically like to get up field quickly and get after the football. This kind of play could slow down aggressive tackles, or make them look like fools chasing the wrong player.