One of the most eye-catching parts of the Redskins preseason opener against the Titans was their pass rush. Brian Orakpo, Ryan Kerrigan and rookie Brandon Jenkins all looked threatening.

Share All sharing options for: Redskins Vs Titans: Reviewing The Pass Rush

With the first preseason game in the books, we finally have some new things to talk about! The Redskins went up against the Titans in Tennessee last night and came away with a (worthless) victory. Even though the result didn't matter, there were plenty of things to take out of the game. One of the first things that took my eye was the Redskins pass rush.

Star linebacker Brian Orakpo made his first appearance after missing the majority of the 2012 season with a pectoral injury. He teamed up with Ryan Kerrigan and rookie fifth rounder Brandon Jenkins to help create pressure in passing situations. We wondered all offseason how Jim Haslett might try to fit all three of those pass rushing linebackers on the field at the same time and that question was answered early on. 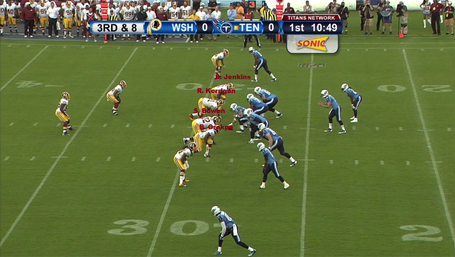 Here we see Jenkins and Orakpo take up the outside linebacker positions on a third and long situation. But interestingly, Kerrigan puts his hand in the dirt and lines up as a 3-Technique defensive tackle over rookie guard Chance Warmack. Stephen Bowen takes up the other interior defensive lineman position. 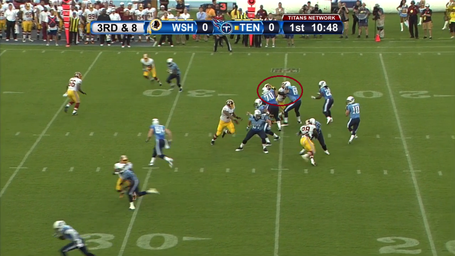 As Titans quarterback Jake Locker drops back to pass, Kerrigan and Jenkins attack their blockers. Kerrigan uses his quickness to get to the outside should of Warmack and begin to use a rip move. Jenkins gets his pad level lower than that of the right tackle, and uses good hand placement to gain control of the blocker. 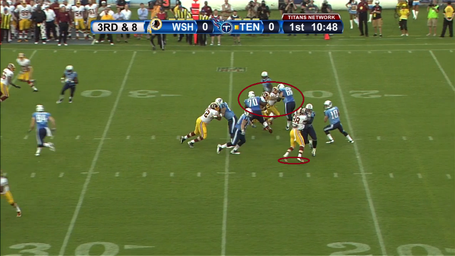 Warmack is really struggling to stay with Kerrigan's quickness while Jenkins is driving the right tackle back. Brian Orakpo also gets himself into a good position, with a lower pad level than the left tackle. That enables him to drive the tackle back and hold his position. 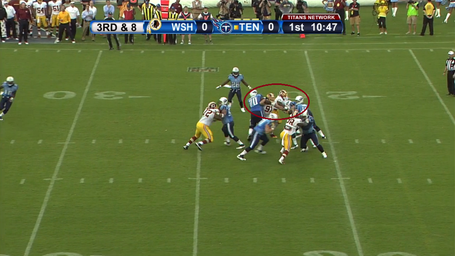 By this point, it's all about Kerrigan and Jenkins. Warmack only manages to keep one arm around Kerrigan; while the right tackle has lost all his technique trying to block Jenkins. They've won their blocks and need to disengage and chase down the quarterback. Locker begins to step up in the pocket. 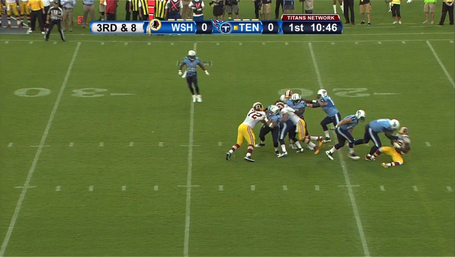 Warmack was only able to hold off Kerrigan for so long. Kerrigan breaks free as Locker attempts to scramble out of the pocket, but Kerrigan manages to sack him before Locker can escape.

It was interesting to see the Redskins be versatile and use Kerrigan on the inside. His quickness will help against bigger, slower guards like Warmack, but I can see him getting caught up in a lot of traffic on the inside. Certainly is something to keep an eye on going forward.

Brian Orakpo had his moment as well, doing a really good job of staying low and turning the edge for his sack. 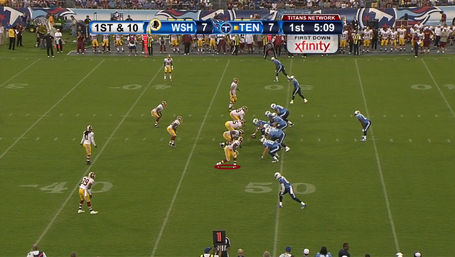 I notice how he lined up very wide on this play, well outside the tight end. This helps him get a better angle to the quarterback, but also leaves a big running lane between him and the nearest defensive end. 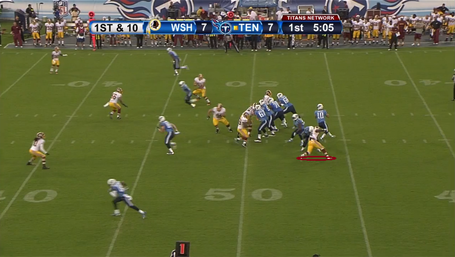 Orakpo attacks the outside shoulder of the left tackle and does a great job staying low. 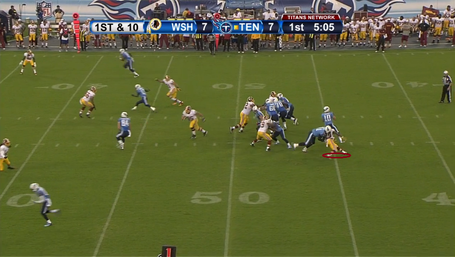 He takes such a low angle that the left tackle can't keep up. He ends up leaving his feet to trying and push Orakpo off his line, but because of Orakpo's angle of attack, he's able to withstand the block and stay with his pursuit of the quarterback. 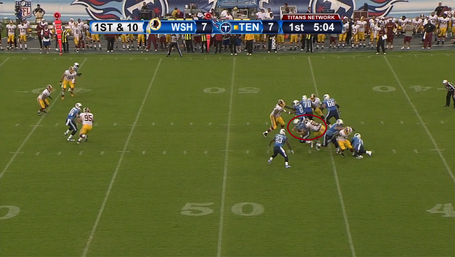 Locker attempts to scramble up the middle, but Orakpo manages to chase him down for his first sack of the season. The first of hopefully many for Brian Orakpo this season.

Let's not forget the rookie Brandon Jenkins. He saw a significant amount of playing time throughout the game and flashed a lot of potential as a speed rusher. 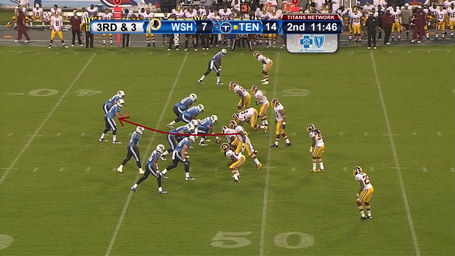 On this play Jenkins is coming off the edge against the right tackle. 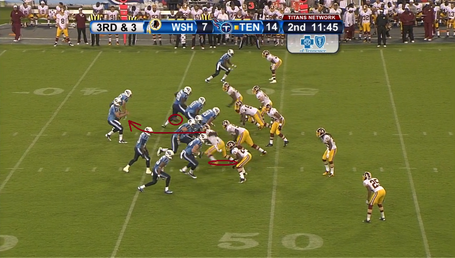 He gets a fantastic jump off the snap. The ball isn't halfway to the quarterback and Jenkins is already past the line of scrimmage. 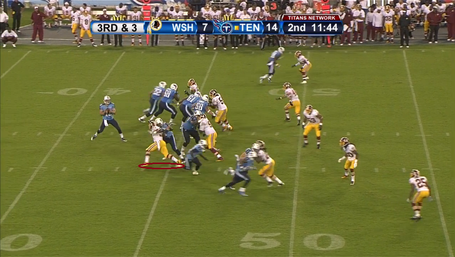 That jump gets him in a great position against the right tackle, who gets completely turned around trying to stay with Jenkins. 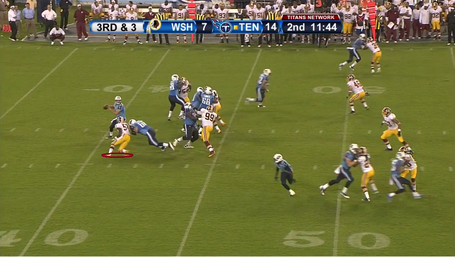 Just like on the Orakpo sack, the tackle leaves his feet to trying and delay Jenkins' rush. 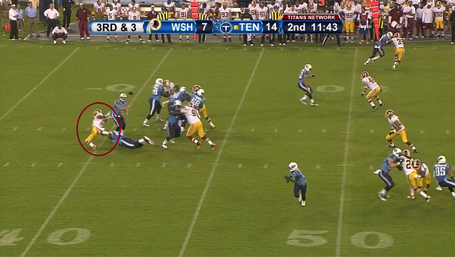 That last effort from the right tackle was just enough to get Jenkins off balance and delay him long enough for Locker to get a pass off. While you would like to see Jenkins finish that play and disrupt the quarterback's throw, to see him get off the snap with that kind of jump is very promising. If he can keep getting elite level jumps like that, then it will be very hard to keep him off the field.