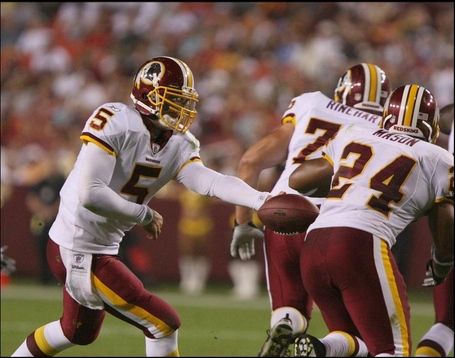 Every season, a new class of draft picks and undrafted free agents are signed during the preseason. The majority of these players will never be on the roster for a regular season game, but the few diamond in the rough late round/UDFA players who do bring hope to players and fans. That racetrack betting slip that you find on the floor that someone didn't scout properly.

Redskins fans are very familiar with the hype that comes with the offseason, especially over the last two decades of dreary seasons. Between the overpriced free agent signings, and the overhyped preseason performances by rookies, we were the perennial offseason champions. Names like Marko Mitchell, Marcus Mason, Brandon Banks, and everyone's favorite Colt Brennan became legendary in training camp and preseason, only to be relegated to the practice squad or the bowels of the depth chart, never to be heard from again. Last year's preseason hero was Alfred Morris who rose up due to injury and necessity after being deemed a practice squad candidate by many, and we all know how that turned out.

Hype is a very real, and very exciting part of football in the preseason. We all read the daily training camp reports and get excited at the prospect of a late round pass rusher getting sack after sack on 3rd string offensive lineman, or a wide receiver catching everything thrown his way, or a running back who's not injured.

The Mason/Brennan award has been given out unofficially by the fans for years to each preseason's most hyped players, but now we're going to make it official, and bring it to a vote. This week's vote will cover the draft and training camp. Place your vote for who you feel has been the most hyped player up to this point, whether the hype is deserved or not. After each preseason game a new vote will be taken to see how the hype changes.

1. Player must have been drafted late or signed by the Redskins as an undrafted free agent. Players that have only been on other teams practice squads that are signed by the team are also eligible.

2. A player that has been on the team for several years is still eligible if most of that time has been spent on the practice squad, inactive, or with very limited productivity/time

1. Skye Dawson, WR - UDFA who has been having a great training camp from all reports. Also fighting to win a job returning kicks. Skye's the limit with this guy...groan.

2. Chase Minnifield, CB - UVA UDFA(2012) Already has a place reserved in the Redskins Ring of Fame. 1st-2nd round talent who fell due to injury. Aggressive camp has people clamoring to cut veterans, other positions, anything to keep him on the team. If not he will be immediately signed and enshrined elsewhere.

3. Aldrick Robinson, WR - 6th round draft pick(2011). Spent his first year on the practice squad, and last year as a deep threat low on the depth chart with 11 catches/3 TD's. Being hyped by RGIII and that's all you need to know.

4. Marvin Burdette, ILB - UDFA and the next London Fletcher. Same size, small school, it's destined to be.

5. Brandon Jenkins, OLB - 5th round draft pick who can consistently beat Jeremy Trueblood like a drum. Impressive. So good that they are already moving Kerrigan around the line to make room for him.

6. Chris Thompson, RB - 5th round draft pick who has been compared to Darren Sproles by many hopeful people, and he has a really nice Youtube highlight video.

7. Bacarri Rambo, FS - 6th round draft pick who is being penciled in as the starting FS week 1, and the 2nd highest selling jersey on the team by Week 2.

8. Jawan Jamison, RB - 7th round draft pick who has been touted by some as a potential #2 RB this season. Compared to Ray Rice predraft...

10. Xavier Nixon, OT - UDFA who was the crown jewel of the 2013 UDFA Redskins class. Hyped as another possible dark horse to win the RT job. The Polumbus Effect part II.

Who is your training camp All-Pro?