Nose tackles are the heart of any 3-4 defense. The defense is built around them being able to run their assignments effectively. The Redskins picked out Barry Cofield to be their guy. Here we look at his film from last season to see just how effective he was.

I sent out the question on twitter asking who should be the subject of my next film review and you guys responded with Barry Cofield. Cofield was one of Mike Shanahan's first big free agent signings, and was brought in to play nose tackle in the Redskins 3-4 system. Having only played in a 4-3 scheme previously, there were doubts over Cofield's fit with the Redskins. But he was willing to learn the position and take on the challenge, which was refreshing after the whole Albert Haynesworth saga.

My thoughts on Cofield going into this piece was that he was an OK nose tackle, and certainly not the weakest link on the defense, but was someone who could be upgraded. Having now spent time studying his game, my opinion has changed.

The first thing that immediately stands out is Cofield's awareness. He's always aware of what is happening and is quick to recognize plays. 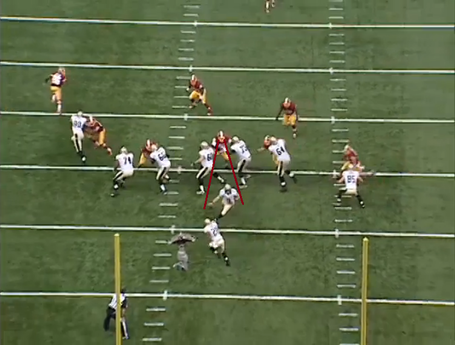 Here the Saints are running a play-action fake. Cofield manages to hold his position while keeping eyes in the backfield and watching the ball through the mesh point. 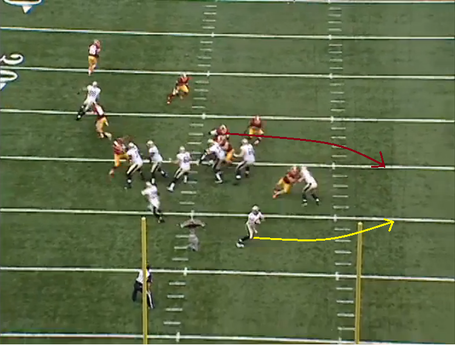 Cofield spots the fake early and manages to disengage from his man and starts his pursuit of Drew Brees. 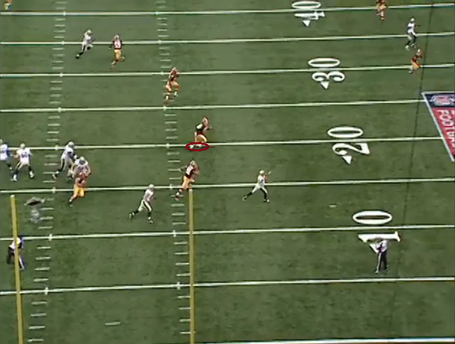 He's the only defensive lineman that didn't get caught up in the play-action. Along with Ryan Kerrigan, they are able to chase down Brees and force him to throw the ball.

He did that a number of times throughout that game and the season. But his awareness didn't stop at play recognition. 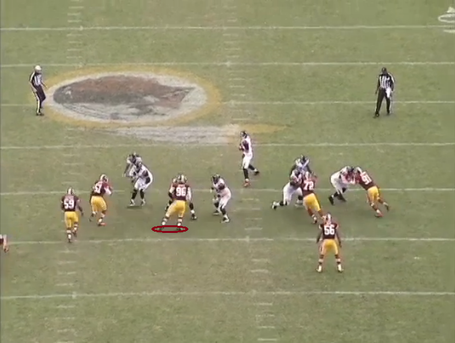 On this play against the Falcons, Cofield is taking on two blockers to help the other rushers get one-on-one match ups. He engages with the first defender with a powerful club move. 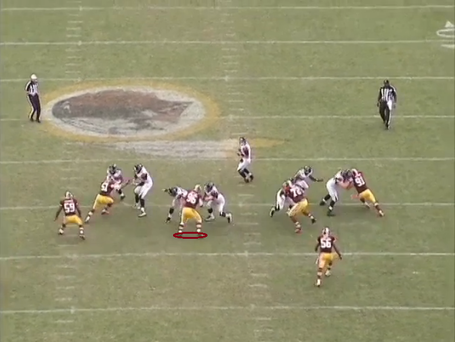 He uses a swim move in combination with the club to fight his way through the first block and onto the second. 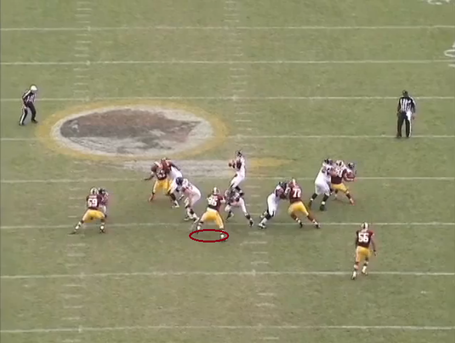 He then starts to drive the blocker back towards Matt Ryan. But like before, Cofield keep an eye in the backfield and watches for when Ryan begins his throwing motion. 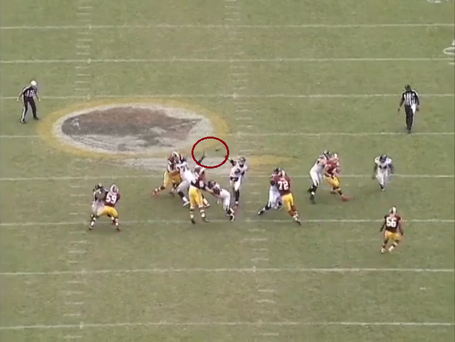 He's able to get his hand up as Ryan releases the ball. 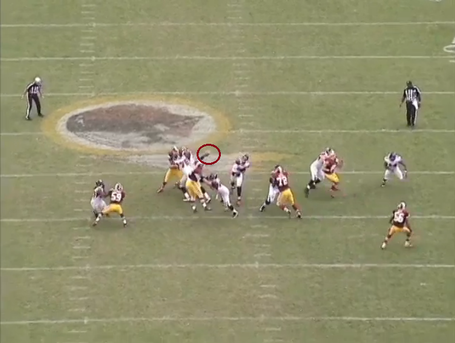 Cofield gets a hand on the ball and deflects it off its course. The pass falls incomplete without ever being of risk to the defense.

Those kinds of plays demonstrate an awareness built up from years of experience. He provides great veteran leadership from a key position on the field and the younger players on the defensive line would be wise to learn these aspects of his game.

As a pass rusher, Cofield only managed three sacks this past season. However, his presence was felt more than just through sacks. In partnership with Stephen Bowen, Cofield was disruptive in passing situations. Both struggled somewhat without the other on the field, but they caused plenty of problems when lined up next to each other. 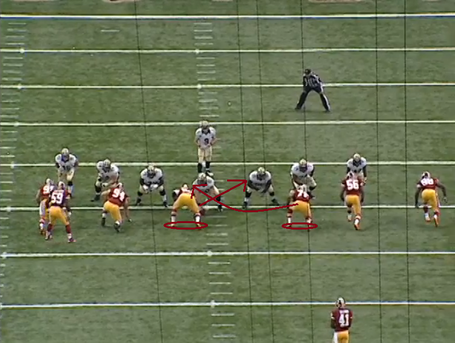 On this play, Cofield and Bowen run a crossing stunt. Cofield will rush across the face of the center and into the left guard. Bowen will then cut behind him and rush up the gap between the center and right guard. 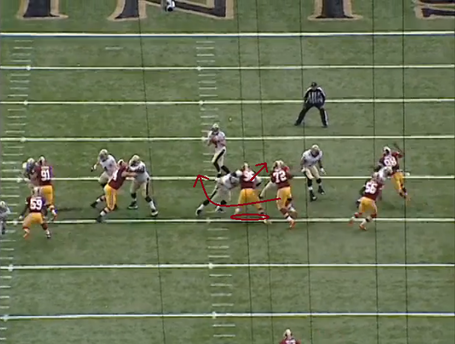 Cofield uses the same club and swim move we saw earlier to get past the block of the center and attract the attention of the left guard. 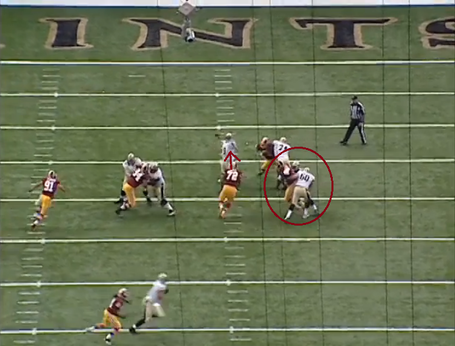 Bowen crosses behind Cofield and finds himself with a free run at Brees. Cofield is able to occupy both the center and left guard and is still nearly able to break through their joint block. There's a hint of a hold from the center, who is practically tackling Cofield by this point. Unfortunately, Brees spots Jimmy Graham running free from DeJon Gomes and gets the throw off before Bowen can interrupt the pass, but that's not the fault of Bowen or Cofield.

Cofield does have a tendency to rely on that club and swim move. He has heavy hands that allow him to club effectively and then burst past his blocker. Here's an example against the Panthers. 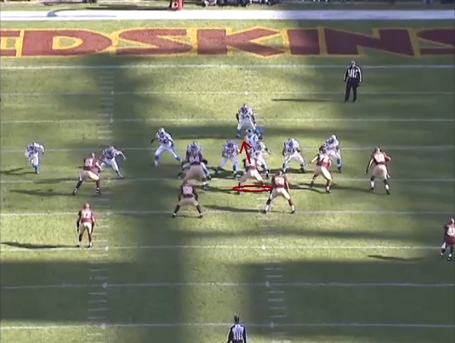 Here Cofield is attacking the 'A' gap between the right guard and the center. 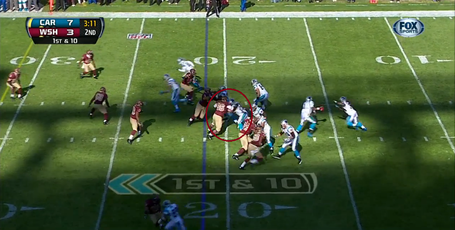 From side on, you can see how he uses his right arm as a club to swat down the hands of the right guard. 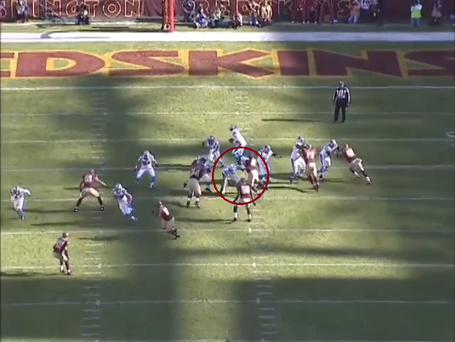 He than lifts his left arm over the right guard and uses it to push off the back of him and propel himself towards Cam Newton. 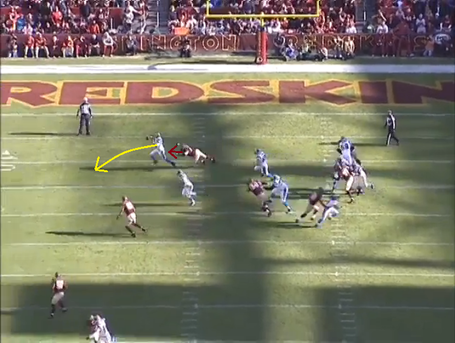 He does a great job chasing down Newton, but can't quite reach him with the dive. Obviously, Newton is much quicker than Cofield and ends up running for a four yard gain, but Cofield did a great job of disrupting his timing and forcing Newton to run on a designed passing play.

That club and swim move does work well for Cofield, but it did get a little predictable at times, which lessened its effectiveness. But for the most part, Cofield did a good job as a pass rusher given that he had to take on multiple blocks on a lot of plays.

Overall he was solid against the run as well. He did a good job of holding his gap for the most part, but occasionally found himself getting cut off on outside runs. 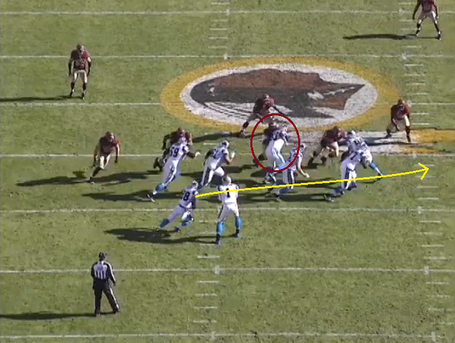 The Panthers are running to the outside of the right tackle. The center is allowed to attack the outside shoulder of Cofield too easily. 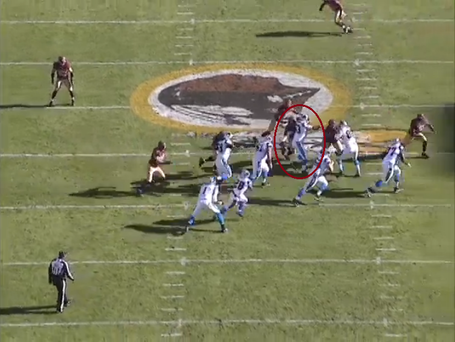 He's able to maintain the block of Cofield while still moving in time with the rest of the offensive line. 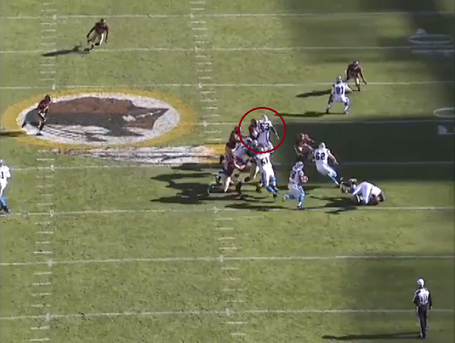 The center is able to cut Cofield off from making the play and actually begins to look to block other incoming defenders. I noticed this type of play was one Cofield struggled with through the games I watched. Sometimes I found Bowen ended up taking on two blocks on running plays while Cofield was blocked one-on-one.

Hopefully going forward, Cofield can transfer his presence as a pass rusher to his run defense. But overall, I was impressed with what I saw from him. He was a much better pass rusher and used his experience in the league to his advantage. He and Bowen definitely made their presence felt on the inside and if Jarvis Jenkins can step up, the Redskins could be nicely set along the defensive line. That should help take pressure off Brian Orakpo as he returns from his injury.