In a recent Reddit AMA, Kyle Turley named London Fletcher as the nastiest, dirtiest, most underhanded son of a bitch while in the NFL. The internet laughs with you, Kyle. 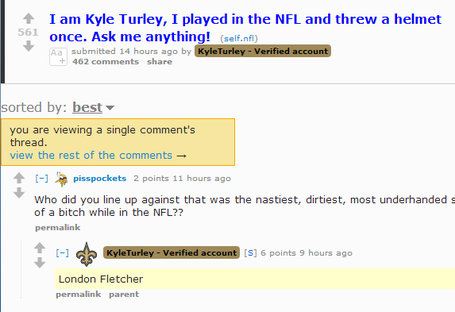 When I first saw this link come across my Gmail I went from shock, to confusion, to laughter. I've had the luxury to meet London Fletcher a couple times at Redskins training camp and player charity events. The first time I saw London Fletcher was in a 2009 Redskins training camp where he was running off the field after practice and stopped to hug and chat with some disabled children in wheelchairs for over five minutes. WHAT A D*CK!!!!

Surely Turley is cracking wise jokes. The only time Fletcher has been fined recently was in 2010 for throwing a forearm to Patrick Crayton. Who wouldn't want to do that to a Cowboy? But think about...there has been TWO full seasons since 2010 that Fletcher has not received any fines.

Last season Fletcher only had 5 penalties called against him, two of which were of the 15-yard flavor (roughing the passer and personal foul). That's pretty vanilla for a middle linebacker.

Turley joined the Rams the season after London Fletcher left.

Regardless, Kyle Turley calling London Fletcher "nasty" is like: