Yesterday, I began the long 12 hour drive from Maine to Richmond, VA to attend my first Redskins Training Camp. It did not disappoint. Totals from both the morning walk-through and afternoon practice were around 10,100 people. The atmosphere was awesome to a person who is typically surrounded by New England Patriots fans. I made as many observations as I could while watching both fields and recorded them on twitter. I'm sure I missed some things but I added over 100 new twitter followers based solely on my tweets today so I will list them here in case some of you are not following me. (Sorry it's so late. Wi-Fi at hotel was acting up.)

Jordan Reed is not wearing a yellow jersey. He's in for walkthrough portion of Fake FG. Dont worry, not swining gate #Redskins

Hall, Amerson, Rambo, Meriweather = 1st team Secondary (A reader then said we should call that secondary H.A.R.M. Thought it was clever.)

J.Wilson is out so next man up. Order doesnt matter yet as everyone will rotate around in the coming weeks.

Orakpo, draped in football accessories, looks amped to be back on the field #RedskinsRVA

Ive been switching between watching O and D but I have yet to see Doughty do anything. If he did, i missed it #RedskinsRVA

REED DOUGHTY IS IN! In a secondary with Jordan Pugh, Jerome Murphy, and Chase Minnifield #RedskinsRVA

Much larger crowd this afternoon #RedskinsRVA

All QBs faking handoffs and rolling out. RG3 looks as smooth as all of them #RedskinsRVA

Like i said, dont read too much into it. Garcon with 1s this time, Robinson with 2s #RedskinsRVA

Chris Thompson takes a hand off and get stopped by Minnifield in backfield. No room. #RedskinsRVA

Kirk Cousins throws Deep to A.Robinson and Bacarri Rambo picks it off #RedskinsRVA

Training Camp Rule: Defense will always be ahead of the offense #RedskinsRVA

FWIW, B. Rambo working as a punt protector #RedskinsRVA

Not only can Sav Rocca kick further than Pat White can throw, but its also a much tighter spiral #RedskinsRVA

RG3 is participating in 7 on 7s. Hall beaten twice in a row on comebacks. #RedskinsRVA

Ive only seen one real tight throw from Pat White. Its something about his weight transfer. He gets nothing off his back foot.

Deep pass to A.Robinson batted away by Biggers. Good to see Biggers with that speed. #RedskinsRVA

Chris Thompson also praticipating in 7 on 7s. Cousins pass to him off the mark #RedskinsRVA

Too much air under Cousins deep passes #RedskinsRVA

Biggers knocks away another ball from Robinson, both times Biggers was able to get between Robinson and ball #RedskinsRVA

Logan Paulsen getting hips and groin stretched on side. Doesnt look like anything major. #RedskinsRVA

White then runs read option as OLB crashes and gets a gain of 10. That wont garner a roster spot. Needs to show more #RedskinsRVA

Coaches yelling at punt team to "Pick up the pace." Crawford and Moss catching most punts #RedskinsRVA

Paulsen back in. Groin looks fine but drops short pass on out route #RedskinsRVA

Donte Stallworth is the only WR who Ive seen do push-ups after dropping a pass. Like to see that. #RedskinsRVA

Seen a lot of different combinations in secondary. Reed Doughty now in with 1s at SS across from Rambo #RedskinsRVA

Cousins throws out route which is undercut and picked off by Kehl, Kehl gets stripped returning it to 2 yard line #RedskinsRVA

RG3 picks up the loose ball and runs and the crowd EXPLODES in cheers and now RG3 chants. #RedskinsRVA

And practice has ended. Thank you for following along #RedskinsRVA

While players are picking children to get autographs, Tony Pashos is with an assistant coach working on Kick Slide. #RedskinsRVA

That about does it. I have more tweets with pictures on twitter @P_Hazard if you're not already following. Let me know what you think of the observations and if you want me to do a post like this for tomorrow's festivities as I know I've posted it late and it might be redundant because many Redskins writers have already had time to post their observations. I'll leave you with a picture of our grand prize. 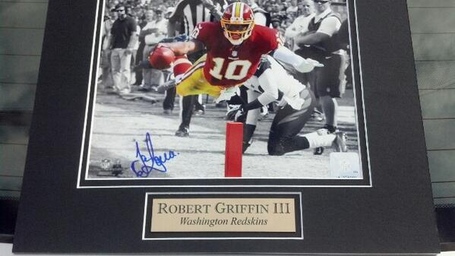