The hot topic of the NFL this off-season has been defending the read-option. We look at how the Carolina Panthers used their slot corners to help them attack the Redskins read-option.

Share All sharing options for: How Corner Blitzing Helps Defend The Read-Option

In this picture, the Redskins are running one of their favorite read-option plays, with Logan Paulsen running an arc block to take away the scrape exchange. 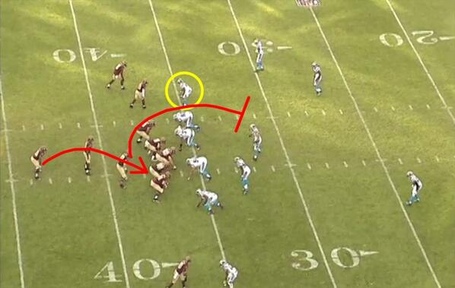 The Redskins have two receivers lined up tight to the formation, giving the slot corner a shorter trip to the quarterback. 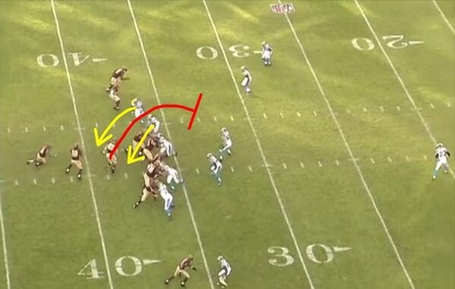 Paulsen sifts across the formation on his arc block, leaving the backside defender unblocked. The slot corner disguises his blitz well and surprises the Redskins. 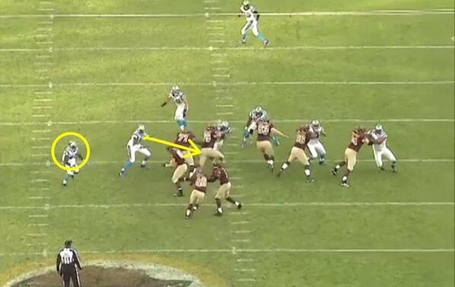 The defensive end shows that he's crashing inside, forcing Griffin to pull the ball and keep it himself. But that leaves the slot corner with a free run at Griffin. 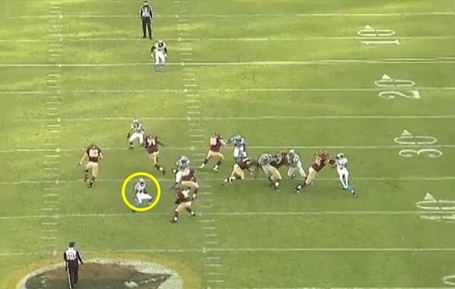 Griffin has nowhere to go. He actually does well to work himself back to the line of scrimmage and not take a loss on the play, but that's a win for the Panthers defense.

The slot corner blitz had a similar effect on the read-option fakes. 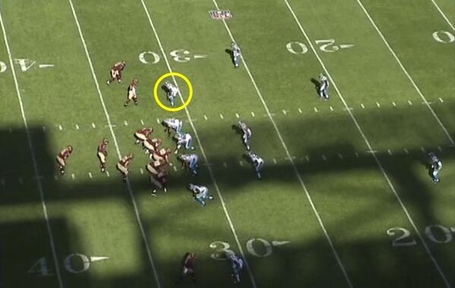 This is pretty much the same look for both sides as the play above. But the Redskins are running a play-action pass. 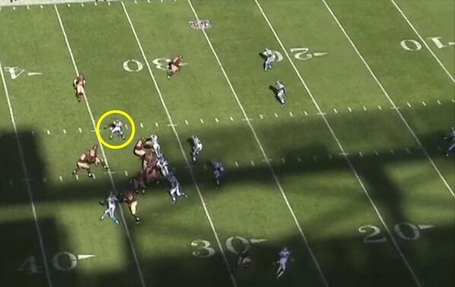 Griffin hides the ball through the mesh point so well that it forces the blitzing corner to hesitate for just a second. 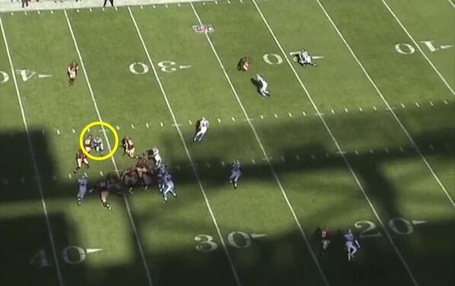 But the hesitation isn't long enough for Alfred Morris to get into a position to maintain a block. 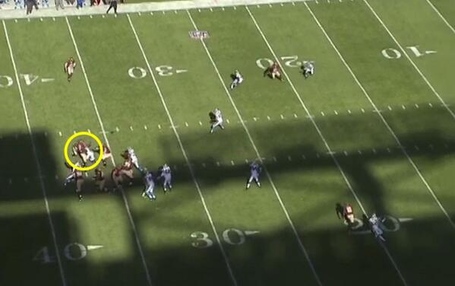 Griffin does really well to get the throw off and is helped by Joshua Morgan, who managed to pull in a one-handed catch that was thrown behind him. It was only down to a fantastic catch by Morgan that the Redskins had success on this play, the Panthers defense didn't do all that much wrong and actually managed to pressure Griffin on a read-option fake. That's something not a lot of teams were able to accomplish.

Corners are normally accounted for by receivers, either via blocking or running a route to take them out of the play. When a corner blitzes and the offense doesn't see it coming, it takes away the balance that the read-option gives the offense.

When I tweeted those pictures out last night, everyone wanted to know how the Redskins could counter it. I've always felt the best way to attack a corner blitz is to throw right over the top of it. The corner on the blitz leaves a hole in the defense for a short period of time until a safety or a linebacker comes across to help out. If you look at both of those plays, the Redskins have a built in bubble screen that would have been perfect. But in order to have time to throw the screen, Griffin would have to know the blitz was coming, which isn't always that easy to recognize.

One person suggested that Paulsen's arc block could have taken the blitzing corner, but again, Paulsen would have had to have know the corner was blitzing into to adjust his assignment. If Paulsen takes the corner, then the Panthers can just use a scraping linebacker to account for Griffin.

The other option for the Redskins is to keep slot corners off the field by using two receiver sets instead of three. The outside corners could still blitz, but have a longer distance to travel before they get to the quarterback. An outside corner blitz also leaves the defense incredibly vulnerable to a quick pass over the top of the blitzing corner, which most teams wouldn't want to risk. While only using two receivers on the field might limit the Redskins receiving threats, the return of Fred Davis and the addition of Jordan Reed could provide two more receiving threats at the tight end position which could cancel out the threat lost by only using two receivers.