Hazard's Huddle: An All-22 film breakdown of Pierre Garcon against one of the top up-and-coming CB's in the league; Joe Haden.

Lately, there have been many conversations here at Hogs Haven about the condition of our receiving core. Are we deep at the position? Do we have woes? Is Josh Morgan going to return healthy and show more explosion? Is Leonard Hankerson going to make the big leap in his 3rd season? Is Santana Moss's age going to catch up on him? Will Aldrick Robinson add any more aspects to his game or will he continue being a one trick pony? No matter how many times it has been discussed, and how many different opinions are shared, it seems that the one thing everyone agrees on is the fact that Pierre Garcon is our best receiver. Is he elite, though? Is he considered a #1 WR around the league? I took a look at the Redskins @ Browns game from last season to see how Garcon matched up with one of the best cornerbacks in the league; Joe Haden. Not only do the Browns have one of the best cornerbacks, but if you remember, this was the game that Kirk Cousins started, so the Browns mostly stacked 8 players in the box to stop Alfred Morris which left the Browns to play mostly man-to-man coverage or cover 3. Here are the results: 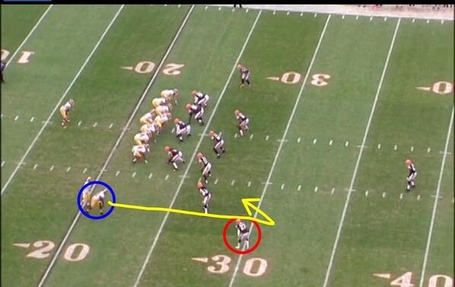 Here's a play from early in the game. Haden wasn't originally covering Garcon but the pre-snap motion left Haden on Garcon. Garcon is running a comeback route. 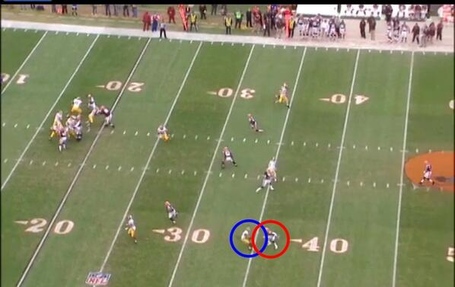 Garcon starts the break down of his route (by design?) before Haden fully opens his hips, therefore creating very little separation. 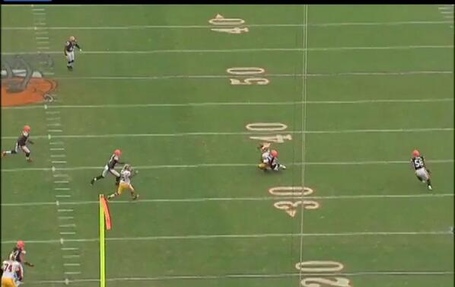 Cousins unloads the pass but Haden is there to hit Garcon and bat the pass away. Advantage: Haden 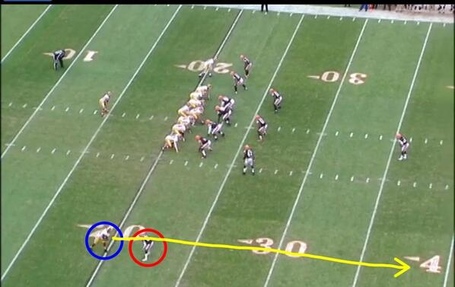 On this play, the Browns are in a Cover 1 (man-to-man coverage with 1 single high safety) with Haden on Garcon and Garcon running a fly route. 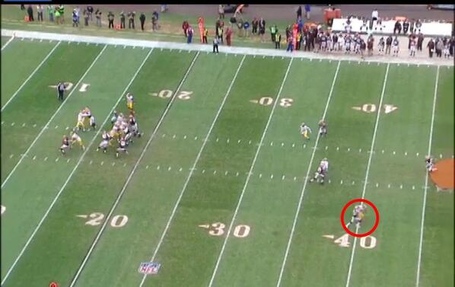 Garcon unsuccessfully tries shaking Haden off the line before heading up-field. In this picture, Haden has his hand on Garcon as Garcon's speed starts becoming a factor. 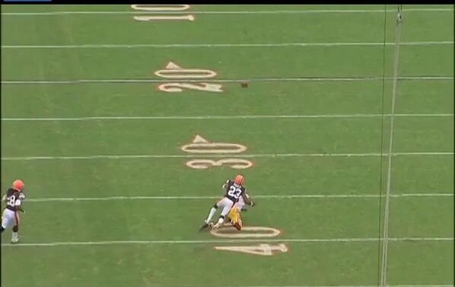 They ended up tripping over each other's feet going for the ball. Although Haden's hand was on Garcon, it didn't look like pass interference and wasn't called. Haden was a 1/2 step behind Garcon. Would have needed a perfect throw. Advantage: Haden 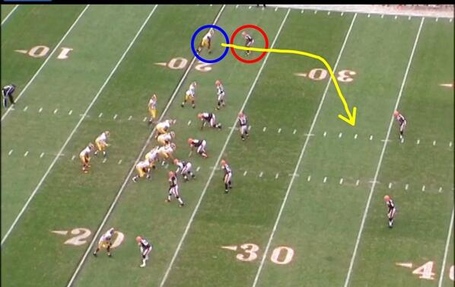 This play was also early in the game. Haden has man coverage on Garcon and Garcon is running a post route. 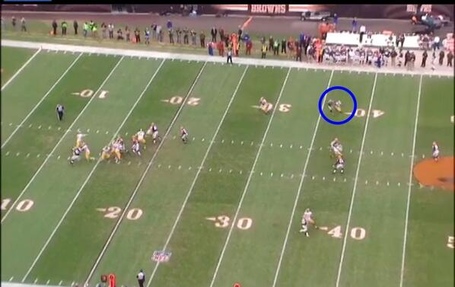 I don't know if Garcon did anything to give away his route or if Haden saw something on tape but Haden jumps right under the route as soon as Garcon makes his cut. He has a deep safety over the top so it's not that big of a gamble for Haden. 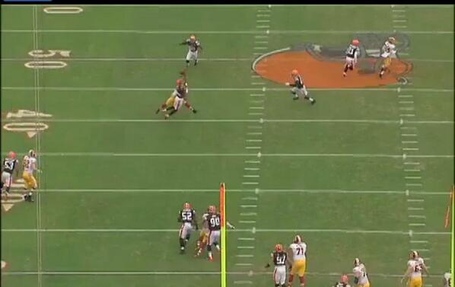 Cousins fires the ball in there and Haden easily bats the ball in the air which allows one of his teammates to pick off the pass and return it 37 yards. Advantage: Haden 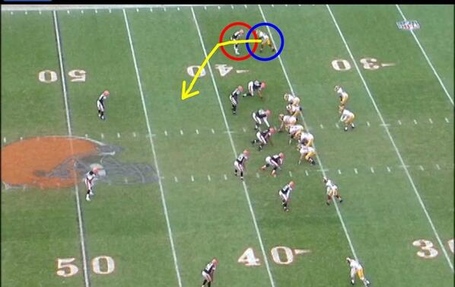 Here, we have Garcon running a quick slant against Haden's man-to-man press coverage. 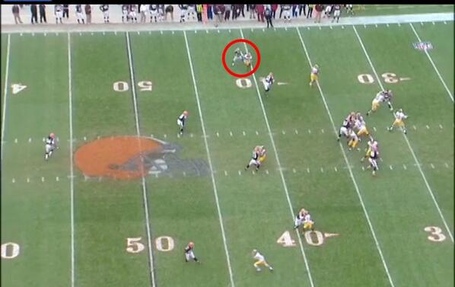 Garcon tries frantically to shake Haden off the line with a lot of foot work but has little success. 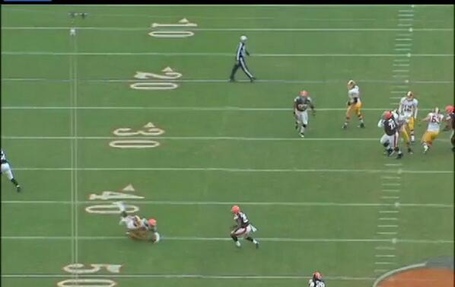 With little separation gained by Garcon, Haden is able to bat the pass away again. Advantage: Haden 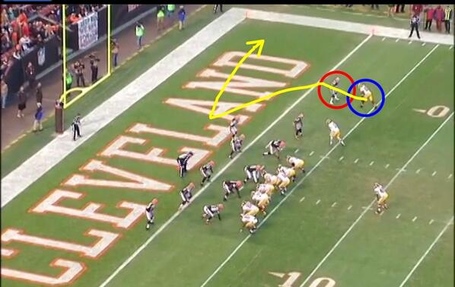 Here is a red zone play. Cousins is going to fake a hand-off to the left and Garcon is going to run a slant/block fake. As Cousins makes the play-fake, he will roll back out to the right and Garcon will break his slant route off and run back to the corner of the end zone. 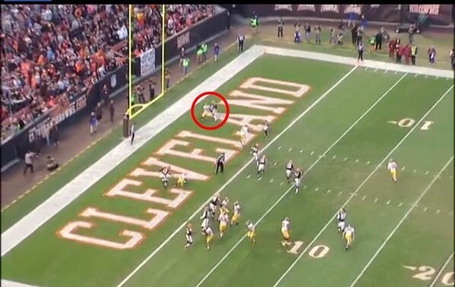 As you can see, while Cousins rolls out to the right, Haden has shielded Garcon from breaking back to the outside (once again, how did he know?). 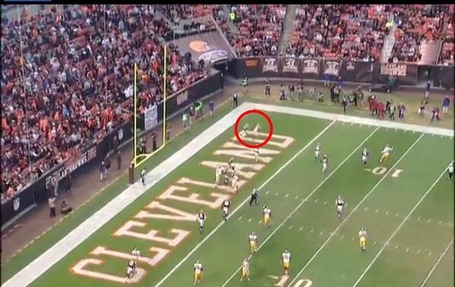 Garcon physically moves Haden off him and starts running to his spot and towards Cousins as Kirk is starting to feel the heat from the pass rush. 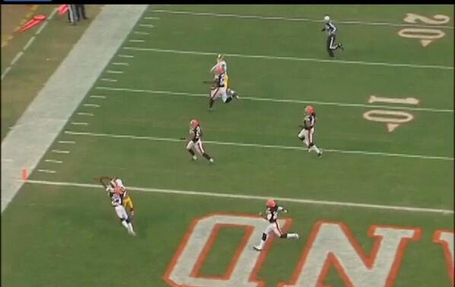 Cousins delivers the pass and even though it is in Garcon's hands in this picture, Haden is able to close the separation Garcon created and knock this ball away from him. Advantage: Haden 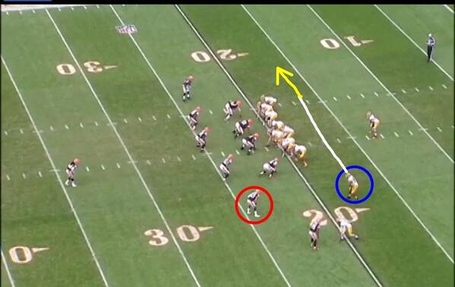 This was the only victory I saw by Garcon in man-to-man coverage but it was a small victory at that. Garcon motions across the formation and Haden follows him. 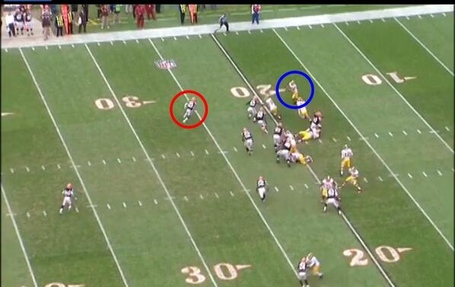 Right after the hike, Cousins fires a pass to Garcon on a bubble screen. As you can see, Haden is still lined up with him. 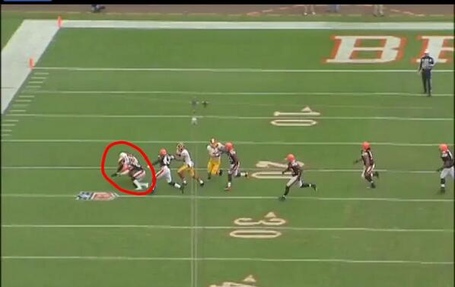 No lead blocker is able to reach Haden and he makes the tackle after a 4 yard gain. Advantage: Garcon 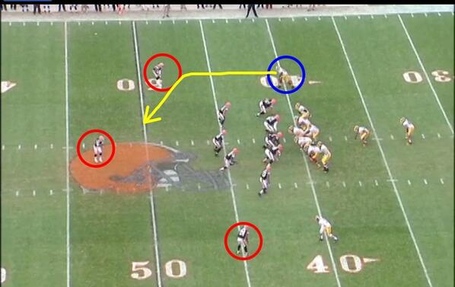 Here is Garcon's only other victory on Haden's side of the field except the Browns are in a Cover 3 so Garcon isn't Haden's sole responsibility. Garcon is running a post route which is a "Cover 3 breaker." 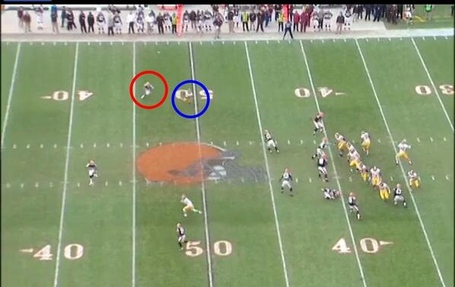 Garcon makes the break on his post route as Haden maintains his deep coverage responsibility. With no other receiver on his side of the field though, he shades Garcon. 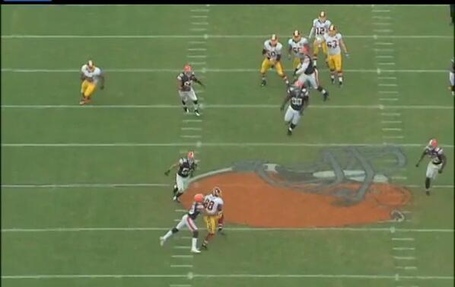 Garcon makes the catch and Haden takes him down to the turf quickly. This was a gain of 17 yards but Garcon was flagged for a 15 yard unsportsmanlike penalty for taunting (I thought it was ridiculous that Haden wasn't flagged at least once for taunting because he did so after each pass he batted away). Advantage: Garcon

Pierre Garcon's ending stat line for this game was 6 catches for 65 yards but only had 2 catches for 21 yards when on Haden's side of the field. The rest of his production came against Sheldon Brown. It was disappointing to see that the Browns didn't respect Garcon enough to put Haden on him the whole game as he seems to do against top WRs in the league. So what do you guys think? Garcon CLEARLY adds a dimension to our offense that isn't there when he's not on the field. Is he a legitimate #1 WR, though? Was this just a down game by Garcon? Or is Joe Haden that good? Does RG3's presence on the field benefit Garcon because it's harder to play man-to-man coverage against a QB who can run? I'd like to hear your thoughts.