At the filming of the Fred Smoot Show on the night of the 2013 NFL draft, Hogs Haven's Ken Meringolo led a snake draft selecting the best rap acts of all time - the results were....interesting.

When doing a draft show, there's only so much college football one can talk about. Ken decided to take a left turn and hold a fantasy draft where each of the people on the show, Shawn Springs, Jordan Bernstine, Fred Smoot, Ken Meringolo, and Josh Morgan, draft their best rap artists/groups of all time. This actually turned out to be quite entertaining as Ken showed his age with rap acts several of the young Redskins have never heard of (which I equate to old fantasy football farts drafting Jon Kitna in the first round of their 2008 league). Some highlights:

Special thanks to Harrison Weinhold for his production of the draft day show. Kid has skills. 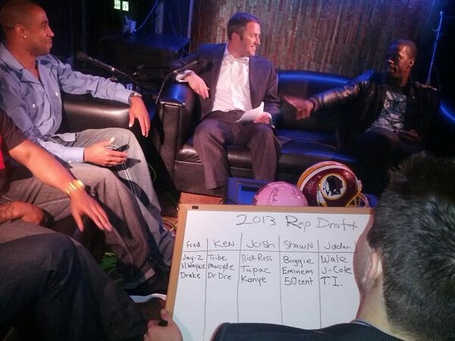