An all 22-film breakdown of the match-up between DeAngelo Hall and Dez Bryant from Week 17 shows an outstanding performance.

In 2008, when the Washington Redskins signed DeAngelo Hall after his failed 7-year, $70 million contract was terminated by the Raiders, I don't think there was anyone as excited as I was about the signing. Since then, my opinion had drastically changed. While DeAngelo Hall is still a capable playmaker, his inconsistent coverage is maddening. Going on his 10th season, he is still a boom or bust player. When he was cut this past off-season, many in Redskins nation were relieved. After many of the CBs on the free agent market signed with other teams, the Redskins re-signed DeAngelo Hall to an affordable contract and those same people in Redskins nation seemed to be relieved again. Are his positives worth his negatives? Opinions on him seem to vary but in one game last season, DeAngelo Hall, at least temporarily, silenced his critics. In Week 17, with the division title on the line, Hall had a great game against the Dallas Cowboys. Tasked with primarily being responsible for Dez Bryant, Hall was able to minimize Bryant's impact until a back injury forced #88 out of the game in the 4th quarter. Let's take a look: 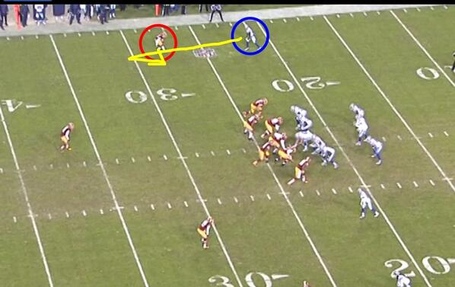 DeAngelo Hall is in a Cover 3 here (which means 3 players drop deep and split the field into thirds) but as I said, Hall is primarily responsible for Bryant, so it's almost a Cover 3 Man for him. Bryant is running a comeback here. 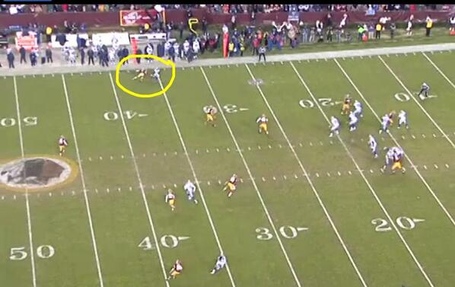 Being the playmaker that he is, he doesn't stay deep over the top of Bryant, instead letting Bryant reduce the distance between the two. When Bryant breaks off his route, Hall is able to break with him. 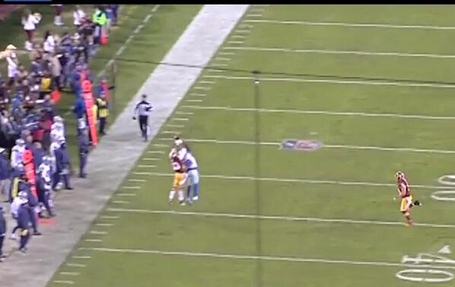 When Romo delivers the pass, Hall is in Bryant's back pocket and is able to bat the pass away. Advantage: Hall 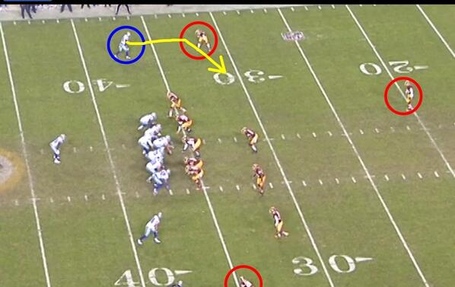 On this play, the Redskins are again in a Cover 3 and this time Dez Bryant runs a slant route. 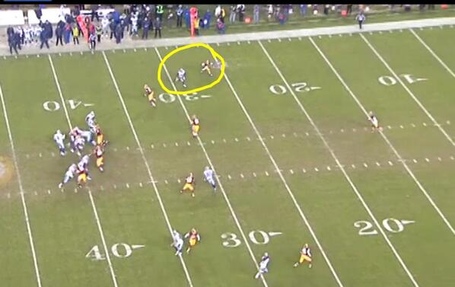 Like I said, it appears even in Cover 3, Hall's attention is completely on Bryant. As you can see, the LB is dropping into a zone underneath Bryant's route. 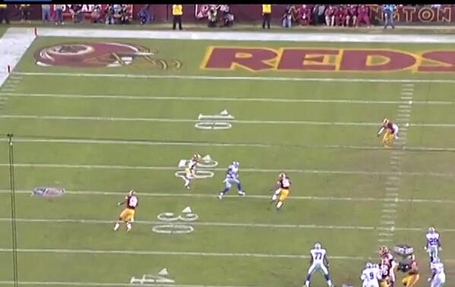 Tony Romo waits for Bryant to clear the LB and hits him in stride before the other LB and in front of Hall for a gain of 16 yards. Advantage: Bryant 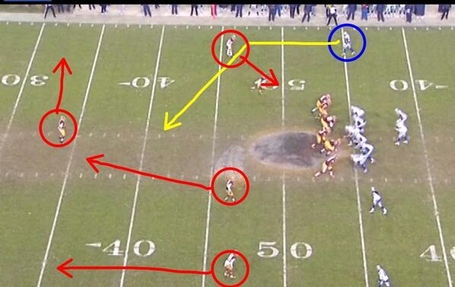 I haven't seen Cover 6 been discussed here often so here's a quick breakdown. Cover 6 is just how it sounds. Six players dropping into 6 zones. Usually, you have one CB (DeAngelo Hall here) who plays flats-to-curls (0-12 yards from line of scrimmage), the single-high safety shifts and plays over Hall, the safety at bottom of screen shifts to deep middle and the CB on opposite side of Hall drops deep. You still have a Cover 3 over the top but you have one CB staying short. Dez Bryant has a post route against this coverage. 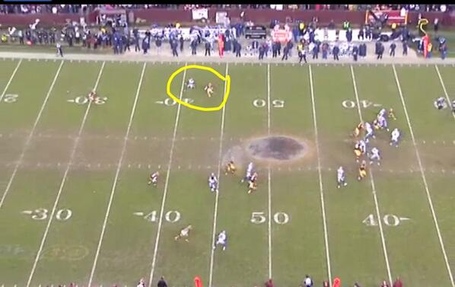 With no offensive player releasing into the flat, Hall continues his drop underneath Dez Bryant's post route. 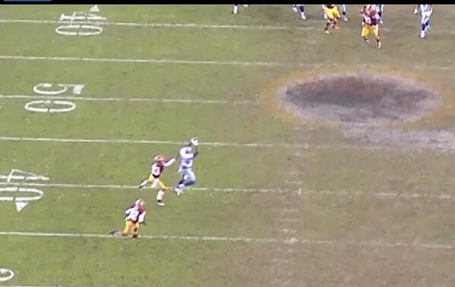 Even though Hall had good coverage, Romo is able to put the ball where Bryant can jump and reach the ball at its highest point. Gain of 17. Advantage: Bryant 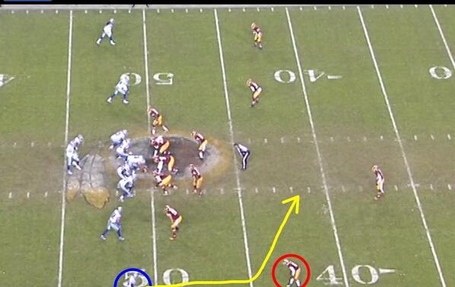 If I recall correctly, in 2011, the Redskins may or may not have lost both games to the Cowboys due to DeAngelo Hall's inability vs. Dez Bryant to hold up in a Cover 0 blitz. Let's see Hall against a post route in Cover 0. 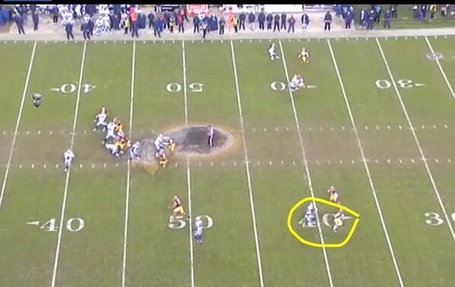 Hall is expecting a deep route so when Bryant makes his break for the post, he opens his hips and takes his eye off the ball for a moment. As you can see, the deep safety is passing by Hall/Bryant to cover the player who is releasing to the bottom of the picture. 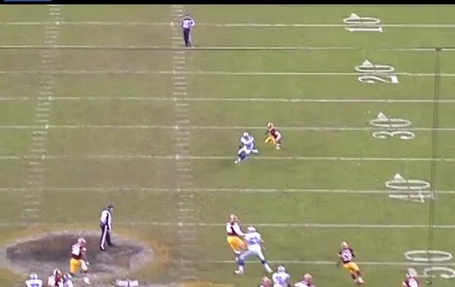 Hall turning around created too much separation and Romo is able to complete the pass to Bryant for a gain of 15. Advantage: Bryant 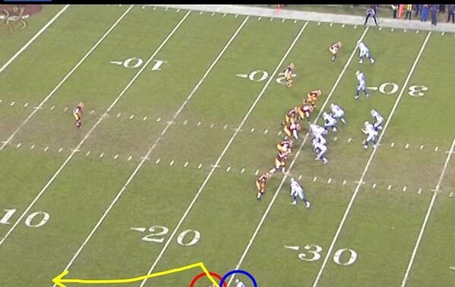 Cover 1 is where CBs make their money. Man-to-man coverage with one single high safety over the top. This was the most common coverage the Redskins ran during this game. On this play, Dez is running a sluggo against Hall without any help over the top. 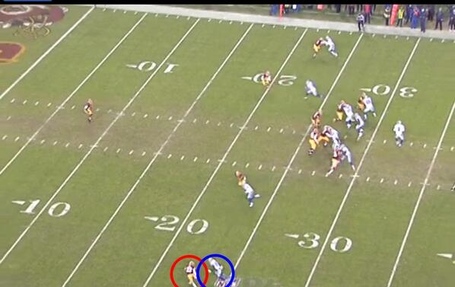 I will admit, this was a lazy route on Bryant's part. He takes a half-hearted step towards the slant which Hall responds to (always looking to jump routes). 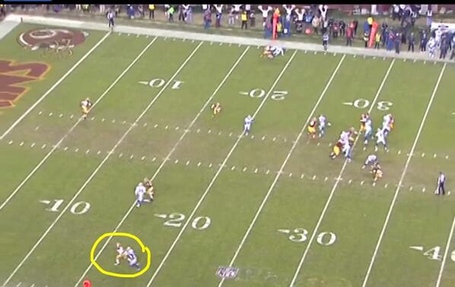 When Bryant turns on the jets and heads up-field, Hall is able to easily adjust and stay over the top of him. Romo throws the ball elsewhere. Advantage: Hall 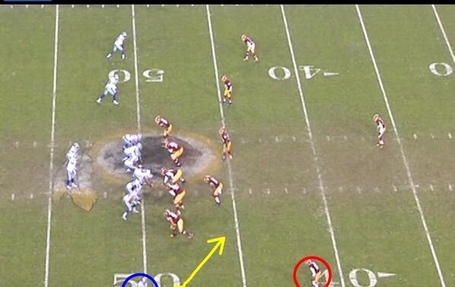 Here's another Cover 1 play, but this time Hall is playing Off-Man coverage (large cushion allowing CB to peak into the backfield). Dez Bryant is running a short slant route. 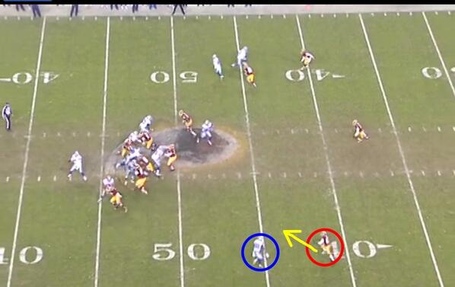 Playing off-man coverage, DeAngelo is not only able to see Bryant's route, he can also see Romo pull the ball back. Hall is able to stick his foot in the ground and drive on the ball. 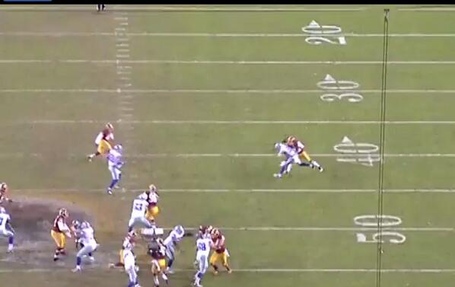 Hall arrives at the same time as the ball and is able to cleanly knock it away. Advantage: Hall 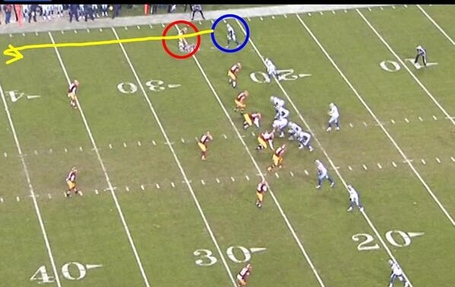 On this play, Hall plays closer to the line of scrimmage. Locked into one on one coverage, Bryant is running a deep comeback route. 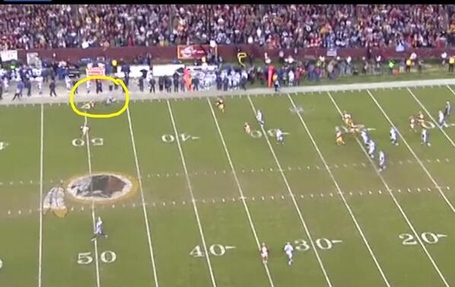 Hall stays relatively close with Bryant but when Bryant breaks his route off, Hall slips to the ground. 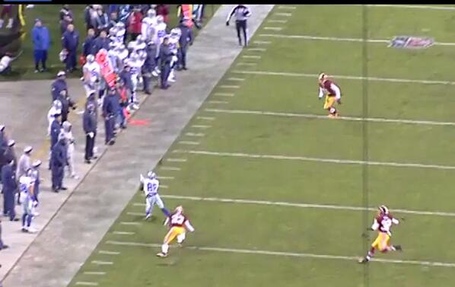 Hall isn't able to recover and Bryant makes a great catch on the sideline while keeping both feet in-bounds for a gain of 23. Advantage: Bryant 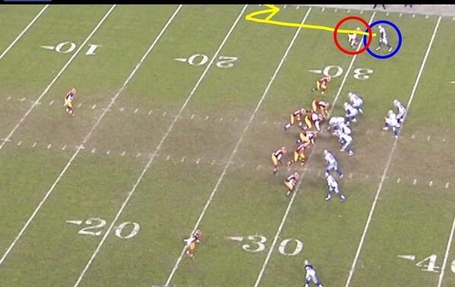 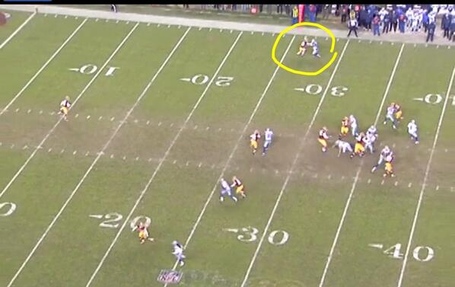 This time, not only does Hall mirror Bryant off the line, but eventually gets his hands on him and presses him. Dez is a strong and powerful WR so to see Hall press him and ride him down the sideline was inspiring. 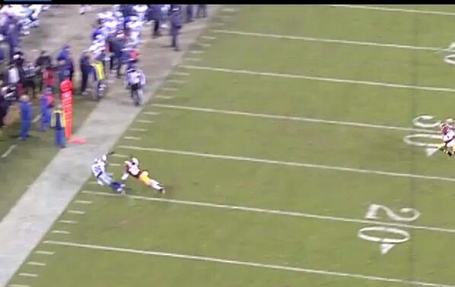 Hall leaves no room for Romo to throw the football and the ball lands out of bounds and incomplete. Advantage: Hall 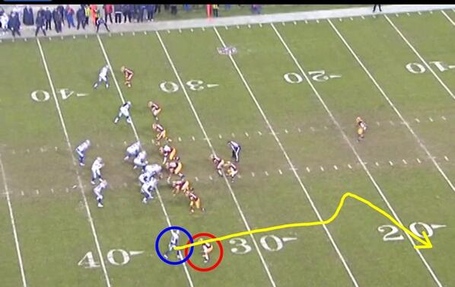 The last play we will look at is another double move by Bryant. Hall is in man coverage against a post-corner route. 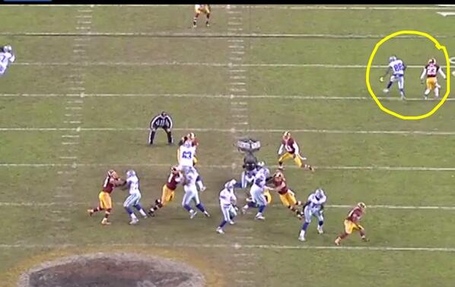 Bryant makes the big head fake and step towards the post but Hall doesn't bite on it (this astonishes me as Hall bites on most things looking for the interception). Instead, Hall stays close to Bryant. 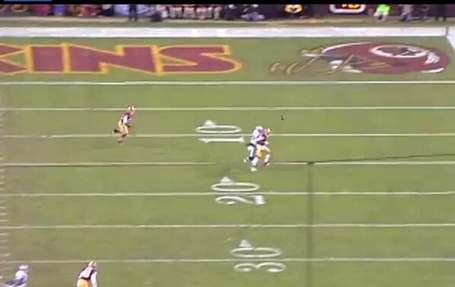 Not only does he stay close, but he runs the route for Bryant, keeping himself between Bryant and the ball to prevent any chance of a completion. Advantage: Hall

Has this review changed my opinion on DeAngelo Hall? Not really but it is very encouraging to see that he does have the ability to put together a solid game of coverage. His ability in this game allowed Jim Haslett to dial up all sorts of biltzes. It seemed Romo had to roll away from pressure on most plays. If Hall could put a few more of these games together, the Redskins defense would absolutely be improved. Most people consider Hall gone after this year, but will a 1 year, low money contract motivate him to prove he still has "it?" I can't tell, but it will be interesting to monitor in 2013.