The general perception of the Redskins offense with Robert Griffin III at the helm is that it is a college spread/option offense. But this simply isn't true. The Redskins use plenty of traditional pro-style concepts that the likes of Peyton Manning have been using for decades.

In Robert Griffin III's rookie season, the Redskins brought in some of the concepts he was familiar with at Baylor. Things like the option run game, packaged plays and the pistol formation all found their way from Baylor's offense into the Redskins playbook. This helped towards a largely successful debut campaign from Griffin, but also lead to a perception among NFL fans and national media that the Redskins run a spread/option college offense. This is not true.

While there are admittedly aspects of college offenses, as mentioned above, the Redskins still use plenty of pro-style concepts. While watching back through the Redskin season, you come across plenty of examples of west coast offense plays and other concepts used frequently around the NFL. Take this play against the Ravens as an example. 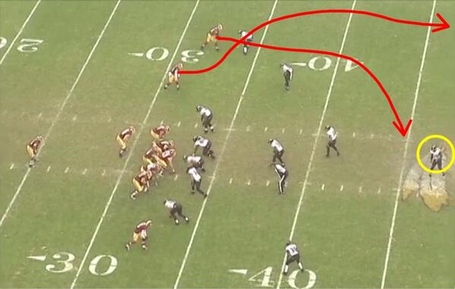 Here the Redskins use a wheel route from the slot combined with an in-breaking route from the outside. The concept is to set a natural screen for the cornerback covering the slot, allowing the slot receiver to gain separation and explode down the sideline. The Ravens show a single high safety look, with man coverage underneath. 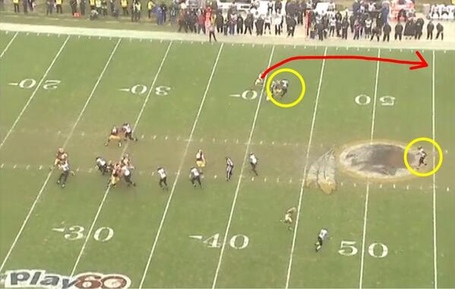 Pierre Garcon gets off the line quickly and gets a critical inside release in order to create the traffic for the slot corner. Santana Moss gets all the separation he needs to get to the outside and turn on the burners to get downfield.

Griffin uses his eyes well here. Notice how he keeps his head straight, so the lines on the top of his helmet are going directly down the middle of the field. 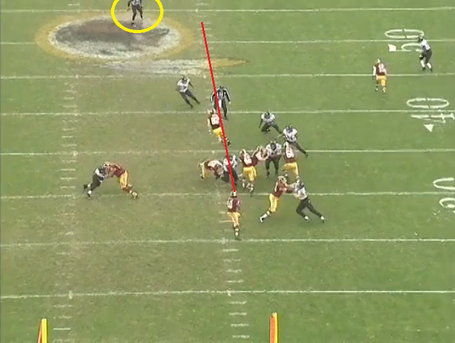 Ed Reed is frozen in place because Griffin appears to be looking straight down the middle of the field, not giving anything away. This stops Reed from being able to get over the top of Moss and help out his struggling teammate. Moss gets a few yards ahead of his defender down the sideline and Griffin pulls the trigger. 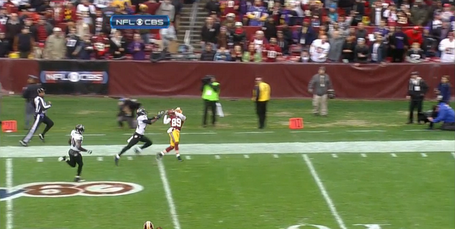 Griffin throws the ball nearly 60 yards in the air and is inches away from hitting Moss perfectly in stride for a touchdown. The ball his his shoulder and Moss is unable to adjust enough to hold onto it.

Now lets go to the Denver Broncos week six Monday night match-up with the Chargers. Down 21-24 in the fourth quarter, Peyton Manning walks up to the line of scrimmage and calls an audible. 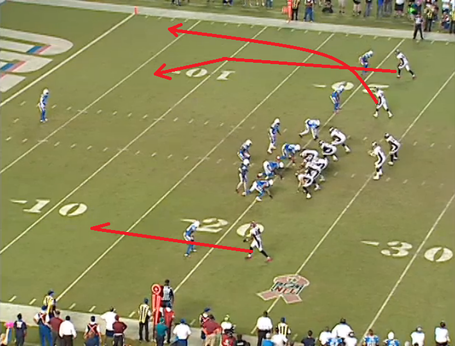 Manning spots the single high coverage, the same the Redskins saw against the Ravens. He signals for his slot receiver Brandon Stokley to run a wheel route. 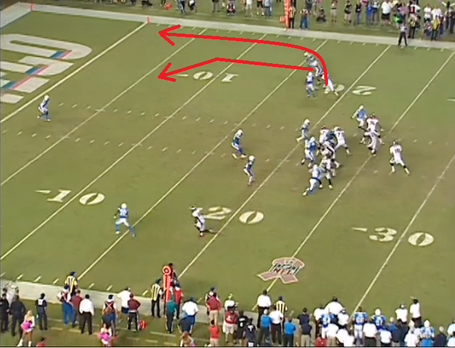 Just like we saw Griffin do above, Manning keeps his eyes down the middle of the field, freezing the free safety in place. 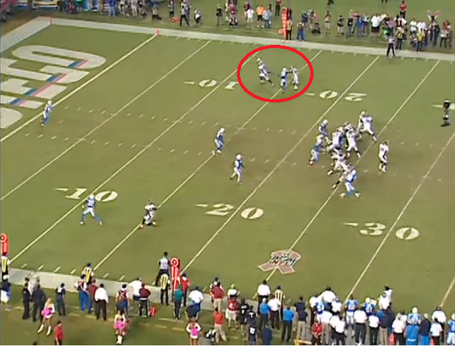 The Broncos aren't able to time the play as well as they'd have liked, meaning there is no traffic for the slot corner to avoid. But Manning trusts his receiver and pulls the trigger anyway. 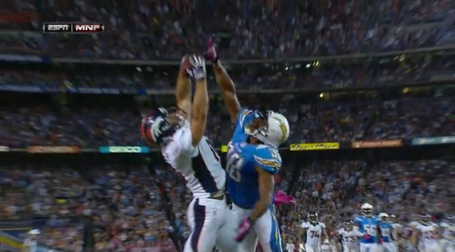 Stokley is able to go up and get a fantastically placed ball and stay in-bounds for the touchdown.

Those plays look similar at all? It's the same basic concept with a few different tweaks. That has been a staple concept in Peyton Manning's offense for years and is solid schematically in the NFL for even longer. The Redskins ran plenty of these tried and tested pro-style concepts this year, but they are seen in every game in the NFL, so are overlooked. The newer, read-option plays took the spotlight because they hadn't been seen much in the NFL before. But the foundation of the Redskins offense is still based upon concepts that Mike Shanahan has been using in the NFL for decades.