In this week's Redskins mailbag we look at; Mo Hurt's performance vs the Eagles, number of rookie starters, 2014 free agent targets and the projected sack totals for Kerrackpo!

It's time for the weekly Redskins mailbag! You know the drill on this one, you leave questions for me in the comments section or on twitter (@UkRedskin1) and I answer them for you. Lets get to it.

@UkRedskin1 @HogsHaven What did you think of Mo Hurt's performance in relief of Polumbus at RT? Is he a legitimate option there?

So I went back and watched the game, and I'm indifferent about it. He wasn't bad in that he got exposed, but he wasn't great either. I noticed a lot of plays where he did just enough to get by. There were even plays where he literally did nothing, here's an example. 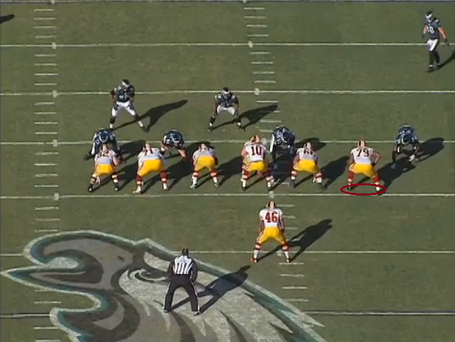 He's at right tackle, on a zone run to the left. He's leaving the backside defensive end unblocked and is assigned with getting to the second level. 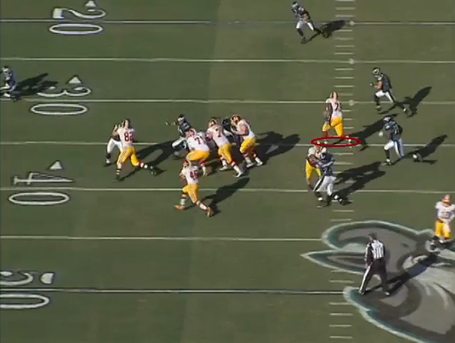 Morris is running to his landmark and Hurt is making his way to cut off the linebacker from the play. 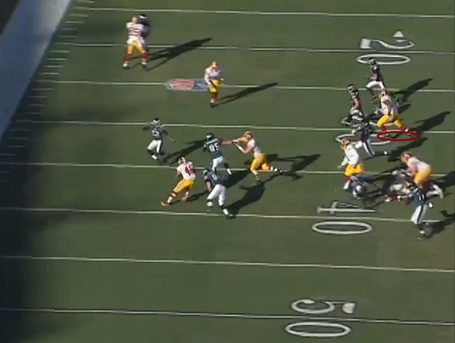 But Hurt never actually managed to lay a hand on anyone. He got away with doing very little on some plays; and I think that demonstrates why Mike Shanahan didn't put a priority on getting a quality right tackle like Eric Winston (who's still available) during free agency. The fact that Hurt could get away with plays like that as the starting right tackle and the Redskins were still successful tells you that perhaps the value on right tackles isn't anywhere near as high in this system as they value on left tackles. To answer your question, no. I think Tyler Polumbus has the job to lose, and I'd imagine that Tom Compton would be next in line.

Its a tough one. The offensive rookies probably wont be starting any games this season barring any injuries. But starting just means playing the first snap. I expect Jordan Reed and Chris Thompson will see plenty of time on the field throughout the year. For week one, I'll go two. I think Chip Kelly will start with three receiver sets, allowing David Amerson to come on the field and move either Wilson or Hall inside to cover the slot. Bacarri Rambo looks the most likely to win the starting free safety spot.

By week eight, I'll go with the same two, but Amerson will be more established as the starting outside corner by that time. For week 16, I'll hazard a guess at three, all the rookie defensive backs.

@UkRedskin1 @hogshaven could you see the skins going after Mcgahee as insurance for Alf? Of course, if the price is right.

Shanahan loves to have plenty of backs in camp, especially veterans, but at this point I'm not sure what Willis McGahee can offer over anyone else. Roy Helu and Chris Thompson offer speed and third down threats, Morris is going to take the majority of the carries, while Evan Royster, Jawan Jamison, Tristan Davis and Keiland Williams will all be competing for reps. I'm going to say no on this one, but you never know with Shanahan.

@UkRedskin1 @HogsHaven can RG3 take us to an undefeated season?

Lets see if he can start and finish all 16 games first...

@UkRedskin1 besides locking up our own players next year in FA what position do you see us targeting next year?

I watched back the Seattle game recently and it was clear we lacked a second receiving threat behind Pierre Garcon. But with Fred Davis back and Jordan Reed drafted, I can see those two being nice versatile receiving threats to take attention away from Garcon. I'm also expecting Josh Morgan to step up after playing hurt all last season. But if he fails to make that step up, I'd say a Z receiver is definitely up there.

Outside of that, I believe both Hall and Wilson are out of contract next season, so a corner could also be high on the list of priorities. I talked about right tackle earlier, and while its still a need, I can see the Shanahans putting their priorities elsewhere. A bit of a wildcard could be a defensive end to fit in the 3-4 scheme. Cofield and Bowen are established, but Jarvis Jenkins and Adam Carriker have had troubles with injuries. If neither one of those two can find a way to stay healthy and productive, then that might become a need as well.

@UkRedskin1 @HogsHaven I believe this will be both Orakpo and Kerrigans best seasons statistically and performance wise. Over/under on sacks

While I think the sacks will definitely go up, I think the pressure those two generate might tell more in interceptions than sacks. I'm expecting an extremely aggressive defense this year with heavy blitzing and defensive backs jumping routes. Why draft three ball-hawks if your not planning to go after the football?

I think around the 22 sack mark would be a good target for them. If Kerrigan continues on the curve hes on, he looks to be good for about 10 sacks this season. Orakpo is a bit of a wildcard. He's playing with a chip on his shoulder, having to prove himself after two big injuries. He's also playing for a new contract; money is always a great motivator. But it remains to be seen just how he responds after those two injuries. From the hype he's received this offseason, we could be looking at a 15 sack season. But I think a 10-12 sack season from Orakpo would be a success.

Remember to leave your questions for next week's mailbag in the comments below or by sending them to me on twitter, @UkRedskin1.