Josh LeRibeus has taken a lot of criticism this offseason. Some of it has been fair, but a lot of it is unwarranted. Here we take a look at the All-22 film to see just how he did on the field in his limited action late last season.

Redskins fans had high expectations of 2012 third round pick Josh LeRibeus, despite the initial surprise at the selection. Unfortunately for him, he found most of his time spent on the bench as the Redskins found continuity along the offensive line. It's not often that all five starting offensive lineman going into the season manage to play the vast majority of the season without getting injured, but it wasn't until late in the week 17 game at home against the Dallas Cowboys that LeRibeus finally saw the field.

LeRibeus reportedly showed up to minicamp and OTAs overweight and out of shape, which is obviously disappointing. But the amount of criticism he's seen for it surprises me. LeRibeus is a young and inexperienced offensive lineman; are we really that shocked that he came back overweight? It's not easy for any lineman to stay in shape in the offseason, let alone a guy entering his second year. There's some guys will deliberately report back with extra pounds to make sure they don't drop under their target playing weight while working out. I fully expect him to get himself in shape and be ready to go in camp and pre-season.

With that out of the way, lets look at how he preformed on the field in his limited time last season. Against the Cowboys, you could see the nerves early on. Some plays he appeared too eager, playing too fast for the tempo of the offense; while on others he'd be too slow to peel off a block. Here's an example. 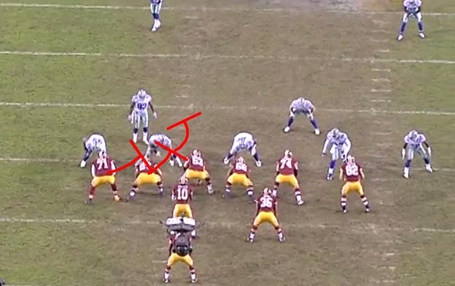 This is a standard zone run to the right. LeRibeus has to secure the defender directly in front of him to allow Trent Williams time to pick up the block. Then LeRibeus has to peel off the defensive lineman and block the incoming linebacker. 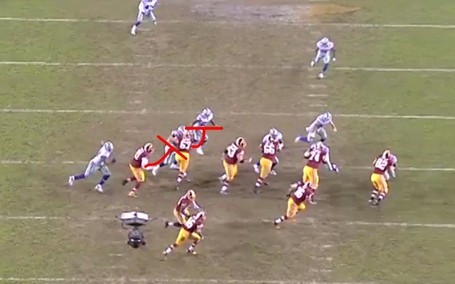 LeRibeus gets a great initial push off the snap and is in perfect position to peel off the block. 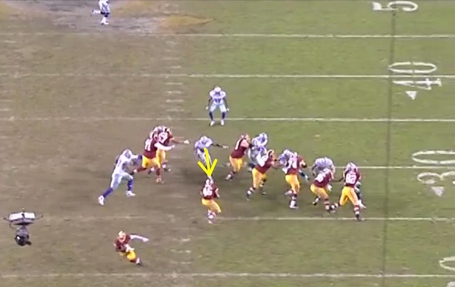 But LeRibeus fails to disengage the defender, leaving the linebacker to run straight through the hole and make a play on Alfred Morris. 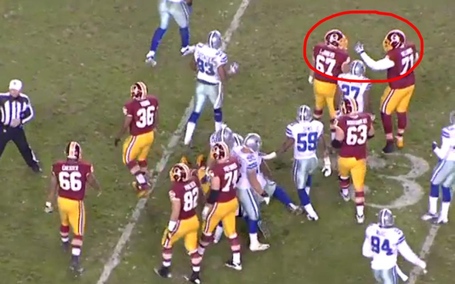 Straight after the play, Trent Williams makes a point of talking to LeRibeus and letting him know what he needed to do on that play. (Side note - I love that leadership from Trent to help out the rookie.)

The advice from Trent clearly helped. A few plays later, LeRibeus made the adjustment. 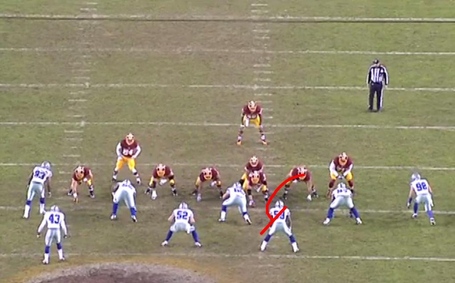 This time LeRibeus gets out to the second level and immediately takes on the linebacker. 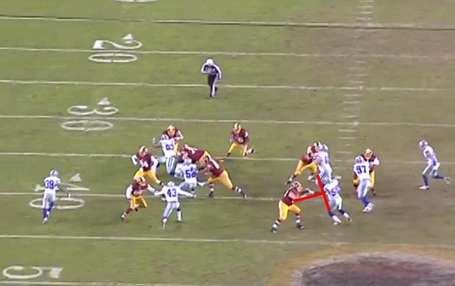 He gets slightly too far out in front, but is able to adjust and block down on the linebacker, leaving Morris a big cutback lane. 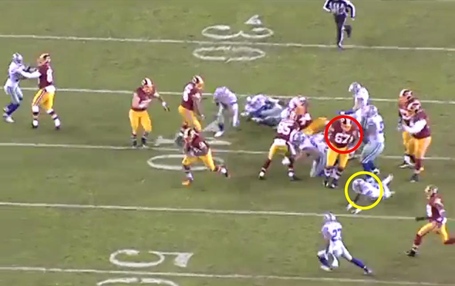 What I liked most about this play was that LeRibeus finished the block. He didn't just cut the linebacker off from the play, he knocked him to the ground emphatically. That nasty streak will leave an impression on defenders. 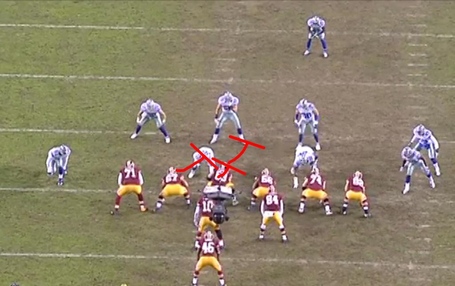 Here LeRibeus has to pick up the defensive tackle once Will Montgomery peels off to the second level, 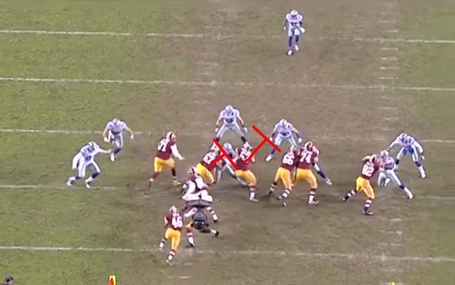 He picks up the block well, but Montgomery struggles to peel off and reach the second tier. 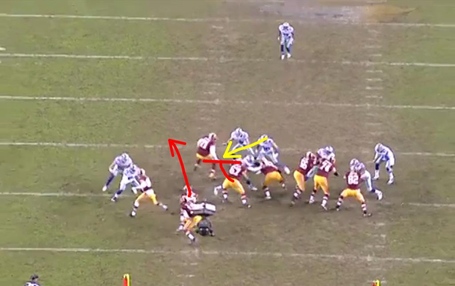 LeRibeus spots the incoming linebacker and is aware enough to adjust and help pick up Montgomery. 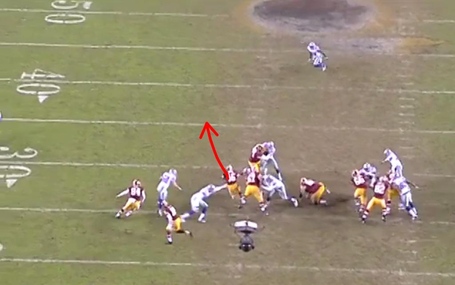 As Morris hits the hole, LeRibeus is able to block both guys with minimal contact allowed on Morris.

But LeRibeus wasn't without his downs in that game. He was at fault on a crucial third down play late in the game, but got away with it after a roughing the passer penalty. 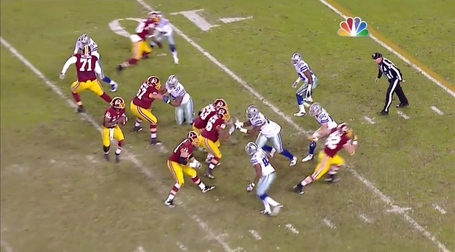 Off the snap, you can see LeRibeus is flat-footed. This is a bad position for an offensive lineman to be in because it makes you easier to push over, which is exactly what happens. 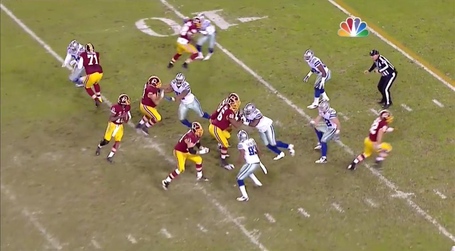 The defender is able to knock away LeRibeus' hands, giving him even more leverage. 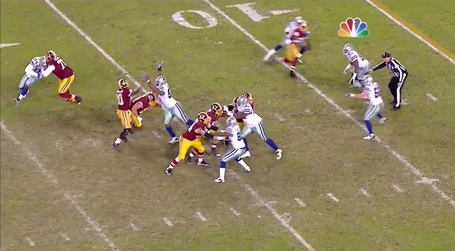 On his way down, LeRibeus attempts to cut block the defender, but is unsuccessful. Griffin was able to get the throw away, but it was incomplete. Luckily, the officials saw minimal contact and called it roughing the passer. But this was a bad play for LeRibeus.

While he had his fair share of ups and downs against the Cowboys, LeRibeus came back strong and looked at home in the playoff game against the Seahawks. Without looking for him, you wouldn't have necessarily noticed him, which is a good thing for a guard. But I did pick out a couple of nice plays. 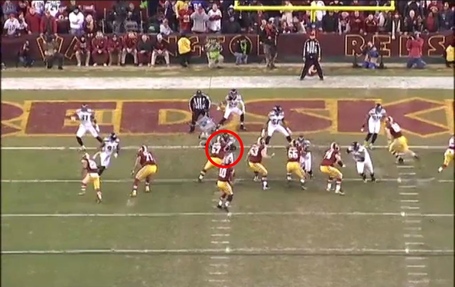 Here LeRibeus is up against Brandon Mebane. Mebane rushes the inside shoulder of LeRibeus off the snap. 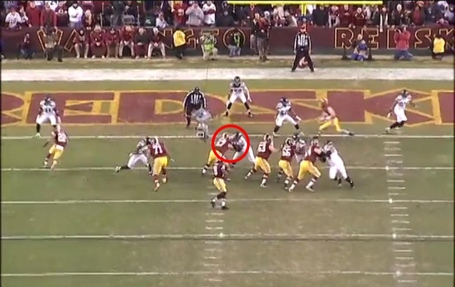 LeRibeus gets in a good tough contest against Mebane, slightly reaching for him here, but he's able to get his hands locked on Mebane. 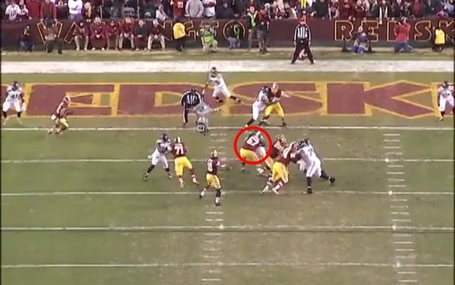 LeRibeus is able to get himself adjusted and forces Mebane to change the direction of his rush and go back the other way. 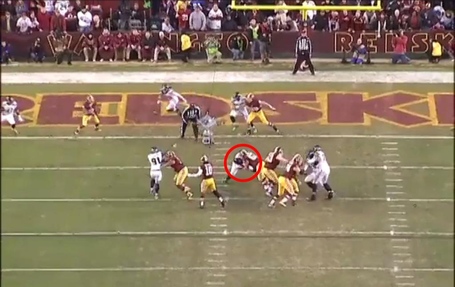 LeRibeus catches Mebane off-balance and starts to finish off his block. 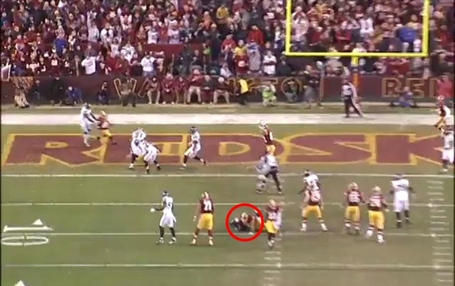 LeRibeus shows that nasty streak again and drives him to the ground. All this in one of his first snaps in the game, substituting in after another injury to Kory Lichtensteiger. That set the tone for the game for LeRibeus, where I struggled to find many faults.

He excelled in the run game too. 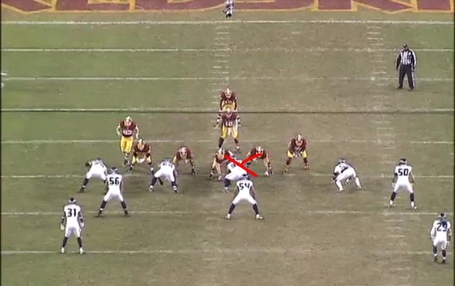 Here he finds himself up against Mebane again, who is effectively a two-gap nose tackle in the Seahawks 4-3 Over defense. 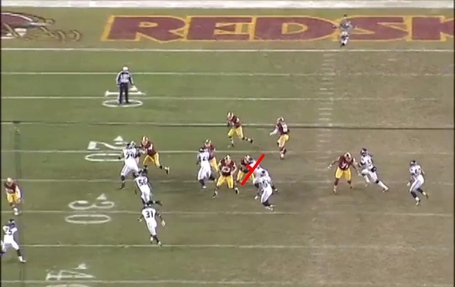 LeRibeus is quick enough to be get to Mebane and allow Montgomery to run free to the second level. 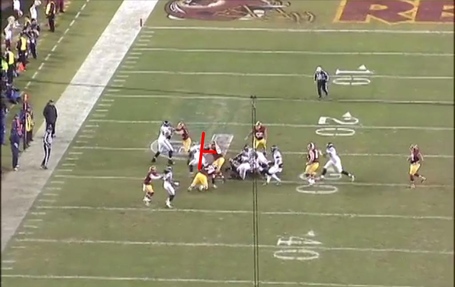 He's able to run Mebane past Morris without Mebane being a factor in the play. Unfortunately, the right side of the offensive line were unable to maintain their blocks and the play broke down, but LeRibeus did his job.

With the Redskins bring back Lichtensteiger, LeRibeus will start camp as the back up left guard. But if he can get himself back in shape and perform as well as he did against the Seahawks, then I can see him pushing Lichtensteiger for that starting job by the start of the season. But either way, competition and depth along the offensive line is always a healthy situation to be in.