Over the past few days, I went back and watched every Redskins third down against the Giants last season, both home and away games. I wanted to get a look at both the Redskins offensive and Giants defensive tendencies on the most important down in the NFL, third. Having played two games against each other, it gave me a good opportunity to collect a bigger sample size and see how tendencies might have changed from the first game to the second.

I kept tally of a number of different categories, including: down and distance, quarter, personnel group, quarterback positioning, formation alignment, motions, defensive look pre-snap, run or pass, coverage scheme, play notes and the result of the play. I put them all together in this table, keeping the two games separate.

That's obviously a lot of information being thrown at you all at once, so here are some of the more interesting things I took out of it.

The Redskins used just three personnel groups on third down; U, Tiger and Zebra. Zebra was the most frequently used (12 times), but that's probably because seven of the 21 third down attempts came from 10 or more yards, making the third receiver most useful than a second tight end or running back. Zebra saw all the snaps of third and six or more. That personnel group only managed to convert four of the 12 attempts they had, but the Redskins did manage to convert a couple of fourth downs after getting in range on third down.

The U group saw six third downs, mostly on short yard situations where the Redskins ran the ball, making use of the extra fullback and tight end as blockers. They converted four of six attempts, three of which came on the exact same play. 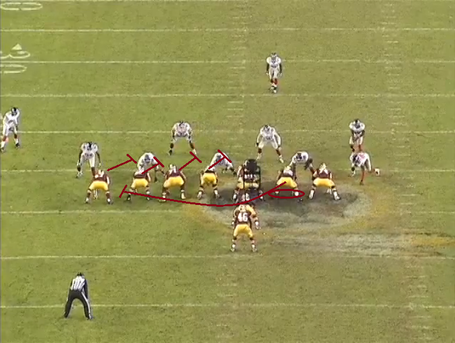 It's a rare power run, involving the tight end heavy side of the line, in this case, the left, to all crash down inside. That allows the right guard, Chris Chester to pull around from his spot and act as a lead blocker for Alfred Morris. 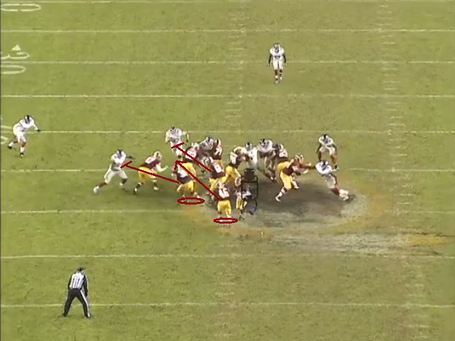 Fullback Darrel Young will take on the defensive end and kick him outside. Chester comes around on his pull and meets an incoming linebacker. 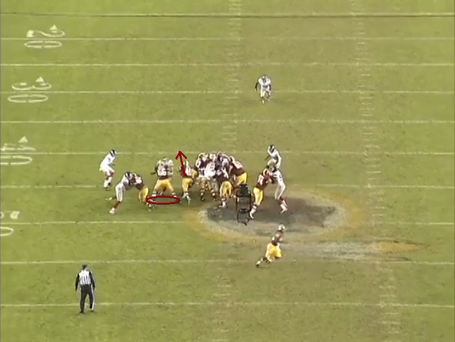 Chester is able to maintain the block long enough for Morris to get through the hole and pick up the first down.

The Redskins used that play three times over the course of the two games, and were successful converting on all three attempts.

Interestingly, the Redskins most successful conversion group, Tiger, only saw the field three times, all in the first game at the Giants. They were successful in converting two of three attempts, but never saw the field on third downs in the second game.

But clearly, the Redskins liked to have two tight ends on the field on third down when possible, be it with U or Tiger personnel groups. That should mean plenty of snaps for Fred Davis, Logan Paulsen, Niles Paul and rookie Jordan Reed.

This was one of the most interesting parts of this study. The Giants showed a single-high-safety look on 8/13 third down plays in the first meeting, but only 3/8 third downs in the second game. Single-high-safety looks will generally mean the defense is running one deep safety with man coverage underneath, or Cover 3.

This may have been a deliberate move by the Giants, having seen the Redskins burn the Cowboys safeties the week before. They might have wanted to be conservative and make sure that they had two safeties deep on third downs to stop them getting burnt. After all, they have great pass-rushers all along that four-man defensive line and hardly need a fifth rusher. But this could have also been a matter of the game situation, with four of the Redskins third down attempts in the second game being from 10 or more yards away.

The Giants didn't try too hard to disguise their looks. They only had three of the 21 total third down attempts where they showed one look pre-snap and switched to a different coverage post snap. In New York, the Giants showed a two deep look but switched to single-high, man coverage after the snap. They twice showed a two deep safety look but rotated their safeties and ran Cover 3 after the snap, once in both games.

One intriguing move the Giants definitely made deliberately was to run Tampa 2 coverage in the second game. They didn't run it at all in the first game, but used it four times in the second.

What's interesting is to see how the Giants used their coverages in relation to yards needed for the first down. Here's a table to show just that.

Again, this plays into the idea the Giants defense played for the situation. In two-five yard situations, the Redskins could realistically run or pass the ball. So the Giants reacted with one deep safety, allowing that extra safety in the box to help support the run if need be. But the further away from the first down the Redskins were, the more the Giants would use two deep safeties.