Looking at plays that can expand the Washington Redskins offense.

Share All sharing options for: Redskins Offensive Evolution: The "Zip-Line"

In 2012, the Washington Redskins offense was nothing short of efficient. The #1 rushing attack in the league combined with a rookie quarterback performance that, while didn't generate HUGE passing numbers, limited turnovers and put points on the board. It was better than any of us could have expected. This week, Kyle Shanahan confirmed what most of us already assumed; the read-option isn't going anywhere. Not only did it protect Robert Griffin III health-wise, it slowed the game down for him and let him succeed as a rookie as defenses were not accustomed to defending this kind of offense at a pro-level. By the time defensive coordinators got enough film on the Redskins offense, RG3 and Alfred Morris had nearly perfected the art of misdirecting the defense. The beauty of it is, this is still the Shanahan offense, just presented with a different icing. If it isn't broke, you don't fix it, but with coaches reaching into the college ranks to find out how to defend this "new" offense, the Shanahan's are not only going to continue running it, but they are going to expand it. Let's look at an example.

It's clear that the Redskins bread and butter in the passing game was hitting the slant/post after the read-option play-action. The play-action would suck-in the linebackers towards the line of scrimmage and give Robert Griffin III enough space to hit a target just behind them.

Here's the play in Week 1 against the Saints. RG3 fakes the hand-off, which brings in three defensive players in the middle of the field, and before one of them can get back, RG3 has already hit Josh Morgan for a gain of 21 yards.

Here it is again in Week 1 against the Saints but this time out of a different look. RG3 fakes the hand-off, which sucks-in three defensive players, RG3 hits Santana Moss out of the slot in the vacated area in the middle of the field for a gain of 14 yards.

Lastly, in Week 4 against the Buccaneers, RG3 fakes the hand-off, and hits Leonard Hankerson behind the LBs that committed to the run (EJ Biggers, who was covering Hankerson, also bit very hard on the play fake) for a gain of 16 yards.

I could have mapped this play out in any game but these were just the quickest examples of the aforementioned play and highlights the fact that they ran it out of different sets and to different people. By the end of the season, LBs were more committed to staying home until they were sure it was a run (Alfred appreciated this) and defenses even brought their safeties a few yards closer to the line of scrimmage to jump the slant/post. This article was originally going to outline how the Redskins could effectively use the post-corner route as a counter to these defensive adjustments but UKRedskin did a good job (as always) touching on it in his latest mailbag. So I'm going to talk about the "Zip-Line."

The "Zip-Line" is essentially a slant-fly route. The wide receiver does about a 3-7 yard slant/post (depending on how the CB/LB is playing him) and reads the safety, if the safety commits to cutting off the route, the wide receiver proceeds to the fly route. Here is Robert Griffin III running it a Baylor: 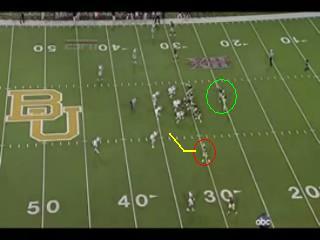 Step 1: RG3 will be running the read-option and the slot at the bottom is running the zip-line. He has a defender playing an inside technique. 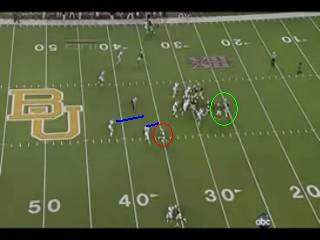 Step 2: RG3 fakes the hand-off and the slot WR runs his slant. Both the defender from his inside AND the safety come up (whether this is to cut off the slant or to help in run support is a moot point but the pump-fake by RG3 makes me believe he was trying to cut off the slant) so the WR explodes into a fly route (imagine Aldrick Robinson in this position). 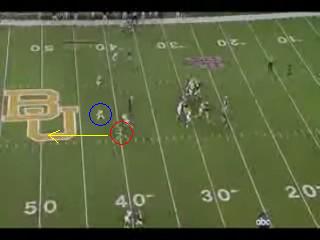 Step 3: He has already passed the inside defender and by the time the safety realizes what is happening and opens his hips, the slot WR is nearly on top of him in a full sprint and the safety has no chance. 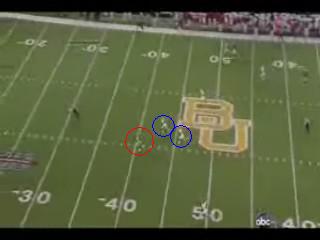 Step 4: By the time the ball arrives, the WR has too much separation and scores an easy touchdown.

Here's the play in action (sorry about the quality):

In the video clip, you can see that Baylor ran the play out of spread. With our new additions, we can start in a much more condensed formation and motion a Jordan Reed, a Fred Davis, a Chris Thompson, or a Darrel Young (like he did last year) out wide to play that other WR at the bottom of the screen. Kyle Shanahan is about the average age of all Hogs Haven contributors so I am sure he has just as much fun drawing up these plays as we do. Kyle, whether he knows it or not (I'm sure he does), has been setting this play up for a year. Come 2013, I hope to see this added to the Washington Redskins playbook making our offense even more difficult to defend.