Last year the Redskins had to rely on Alfred Morris to take the majority of the carries. His play between the tackles was fantastic, but the one thing he lacked is speed. Having drafted Chris Thompson and the return of a healthy Roy Helu Jr, could the Redskins use more plays like the 18-19 Bounce series to get more speed on the edge?

While doing some research on defenses, I came across this article over at FieldGulls, the SBNation Seahawks site. In that piece they have a gif from the wildcard game against the Redskins where Alfred Morris was able to break a run outside for a big gain. I noticed how the blocking scheme was slightly different to a typical Redskins stretch run play.

Simply put, the Redskins used what they call "18 Bounce". Instead of the entire offensive line moving sideline to sideline and creating cutback lanes as they would on a normal stretch run; the tight end will down-block on the strong-side defensive end, allowing the offensive tackle to 'bounce' outside and act as a lead blocker on the edge. 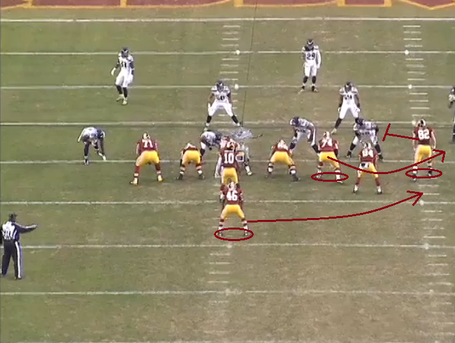 On the play, Logan Paulsen blocks down on Red Bryant to allow right tackle Tyler Polumbus to get out on the edge. 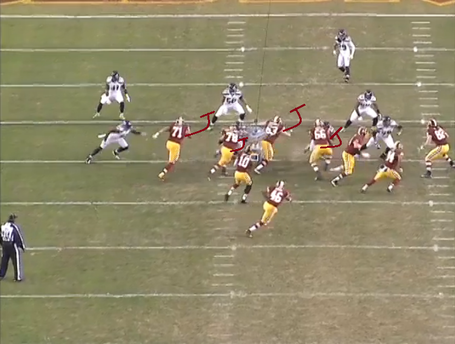 Immediately after the snap, both guards will look to get play-side of their defender. On the standard stretch play, they'd be content with pushing the defenders towards the sideline and creating cutback lanes, but not here. Kory Lichtensteiger and Chris Chester do a great job of stepping across their respective defensive lineman and getting in position to cut them off from the play. Meanwhile, Trent Williams and Will Montgomery will go straight into the second level and try to cut off the linebackers before they can diagnose the play. 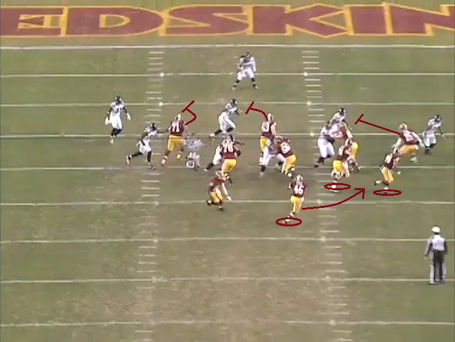 By the point Morris receives the toss, Lichtensteiger, Chester and Paulsen all have their blocks under control and are able to cut off the inside defenders from making the play. Joshua Morgan comes up from his receiver position to make another cut off linebacker Bobby Wagner, leaving Morris to run behind Tyler Polumbus and Niles Paul. 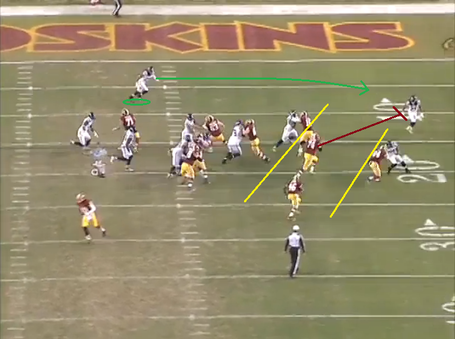 Paul is able to block Leroy Hill, who was able to avoid the cut off blocks and get outside. But Paul is able to maintain a block to open up a huge running lane for Morris behind his lead blocker, Polumbus, who is running full steam into Richard Sherman. Free safety Earl Thomas is the only player left that can save the touchdown for the Seahawks. 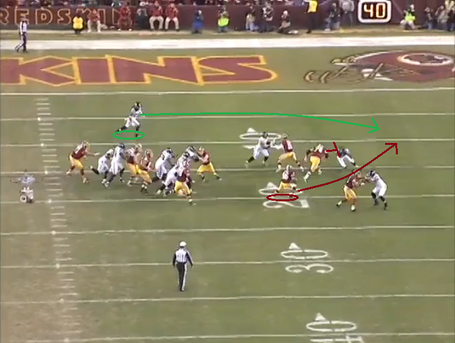 Polumbus dives on top of Sherman, allowing Morris the room to cut outside and up the sideline. Thomas is still in pursuit. 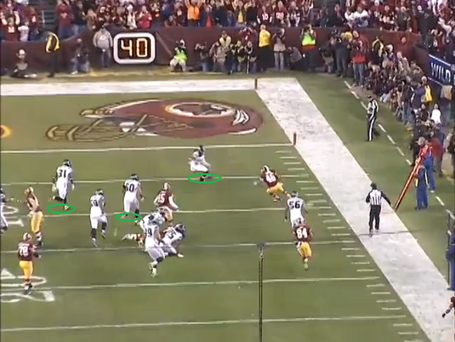 Unfortunately Thomas was able to get over in time to slow down Morris while other pursuing defenders caught up. Morris was brought down short of the touchdown and a few plays later, Robert Griffin III hurt his knee rolling to his right. But that's a different discussion.

The reason I bring up this play is because of the personnel the Redskins now have. It's a play designed to get a runner to the edge quickly and let him explode up the sideline. With all due respect to Alfred Morris, that's just not his game. However, the Redskins drafted Chris Thompson and Jawan Jamison to join the recovering Roy Helu Jr. Those guys have more speed to offer than Morris, which could allow the Redskins to call this play more often.

I'm already envisioning Thompson running '19 Bounce' to Trent's side and then using that speed to do something like this: