Redskins Rookie Running Back Chris Thompson And The Wheel Route

Share All sharing options for: Redskins Rookie Running Back Chris Thompson And The Wheel Route

The Redskins selected running back Chris Thompson with the first of their two fifth round picks in last week's. Thompson took mental reps at this week's 3-day rookie mini-camp as he continues with his recovery from ACL surgery. But that didn't stop Mike Shanahan from singing his praises when talking to the media recently, as Zac Boyer of the Free Lance-Star tweeted.

Shanahan said #Redskins had a first- or second-round grade on Chris Thompson and think he would've been taken there if not for the torn ACL.

Clearly Shanahan rates Thompson highly, which has me intrigued to see how the Redskins could use him. One of the best receiving backs in the league is Darren Sproles. So I set about watching some Saints film to see how the Saints got the most out of him. Needless to say, there were plenty of screen passes. The Redskins have the athletic lineman with the ability to get out to the edge and set up a screen, but this is nothing new to any of us.

One thing the Saints used to get Sproles the ball in space was the wheel route. Here's what it looks like. 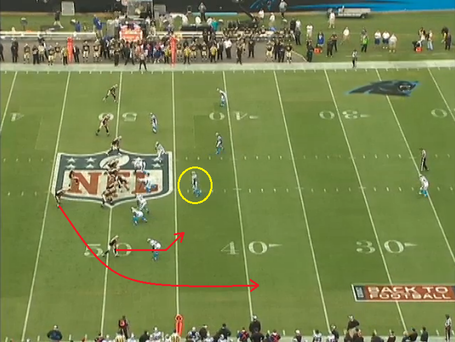 The Saints split Jimmy Graham out wide and have him run a slant. Sproles is in the backfield with Drew Brees and will run out into the flat and up the sideline. The linebacker circled in yellow is assigned to cover Sproles one on one. 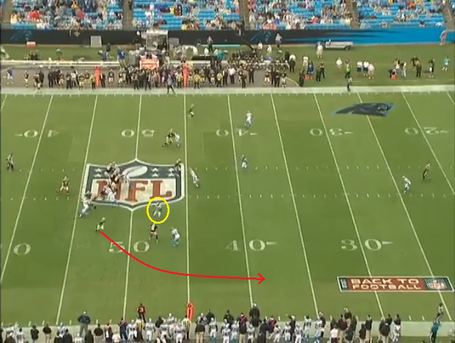 The slant by Graham causes traffic for the linebacker, allowing Sproles to gain an extra couple of yards on him. 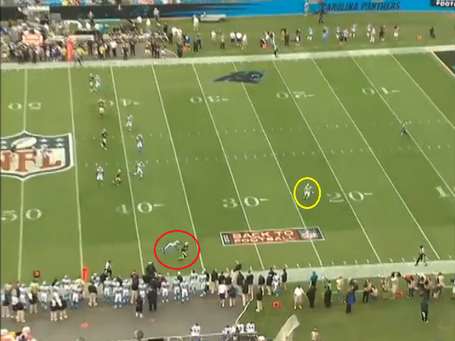 Brees fits the ball in over Sproles shoulder and allows him to outrun the linebacker. The Panthers played with a single high safety, who is now the only man who can stop Sproles from scoring a touchdown. Fortunately for Carolina, he managed to make the play.

This is an excellent concept that the Saints utilized to get the best out of Sproles. But how can the Redskins adapt it to fit their offense? I thought the best play to add it to would be the play-action post passes we saw every game last season. 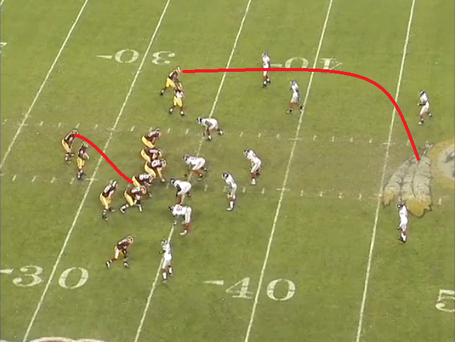 When the Redskins have run the ball down your throat, they catch you on this play. They run it like its a read-option run play. 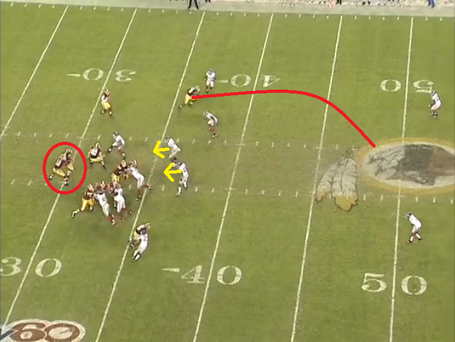 Once the linebackers are drawn in, Robert Griffin III pulls the ball out and looks to pass. In this example, Pierre Garcon is the receiver running the post route on the backside of this play. 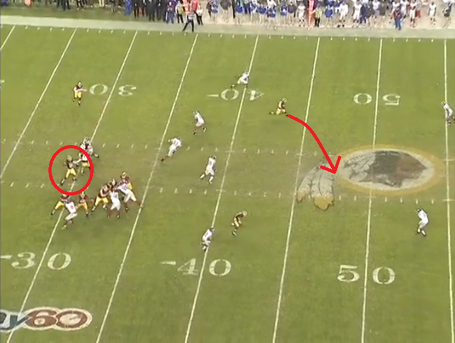 Griffin throws the ball as Garcon breaks inside and its an easy completion for a nice chunk of yards.

The Redskins made a living off this play last season, but teams began to cotton on towards the end of the season and the linebackers were dropping back quickly to where they knew the ball was going. So my thought was to add a wheel route from the running back on to this play. Here's what it would look like drawn up. 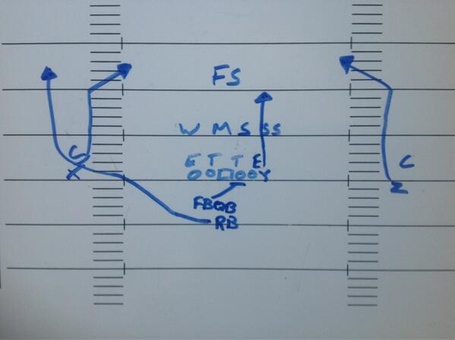 In an ideal situation, the defense is playing man coverage with a single deep safety. That would leave the 'Will' backer in one on one coverage with Thompson on the wheel route. Just like we saw before, Griffin would pull the ball from Alfred Morris (the fullback on the diagram above) and be ready to throw. Thompson's speed along with the play-action fake should make it extremely hard for the Will to stay with Thompson up the sideline.

Against Cover 3, the other likely coverage scheme from this look, the corner lined up over the 'X' receiver would drop into the deep left third of the field, taking away the wheel route. However, Griffin can throw the post to Garcon or fake that throw to move the free safety and hit the tight end running up the seam.