Let's Not Turn RGIII into McNabb When it Comes to Interviews

I pen an open letter to major media and SEO-hungry blogs to not ruin RGIII's media interviews by reporting things out of context. Instead of decades of fun interviews, we'll be left with a Donovan McNabb like character who robotically provides answers that avoid any fun and controversy.

Share All sharing options for: Let's Not Turn RGIII into McNabb When it Comes to Interviews

There's a lot of reasons Redskins fans fell in love with Robert Griffin III. His talent on the field was undeniable in turning around Baylor University's football program. The largest reason, though, I believe is his personality. He carries himself with the perfect balance of leadership, respect for elders, and sense of humor...a total package missing from Redskins Park for as long as I can remember. The key part for me is that last part: his sense of humor. Fox5 News put together a hilarious video last year of all of RGIII's best presser moments. There are jokes about plugging Subway and my personal favorite regarding his knee injury: "I know as soon as I got hit....I screamed....like a man of course."

Fast forward to his media presser yesterday. RGIII led off yesterday's interview with: "I would love to answer some questions about the team today." A clear message that he doesn't want to talk about his wedding registry or any of the zillion other things that blogs and major media decide to run with. One thing I learned about covering the Redskins over the years is that the audio of an interview is MUCH different than the transcript. Making matters worse, the major media and blogs that only read the excerpts from the transcript, which potentially strip out any context RGIII had. It's funny though, right? So who cares!! Run with t!

Let's be clear here though. I have the utmost respect for each of the Redskins beat-writers: John Keim, Rich Campbell, Mike Jones, Grant Paulsen, Chris Russell, Zac Boyer, Tarik El-Bashir, and Rich Tandler. When it comes to their coverage of RGIII's pressers, they parse out the important information: RGIII's rehab, his relationship with teammates, what he has learned, fun with teammates, and general news fans want to hear about.

The DC Sports Bog is and always has been my favorite website in existence. Their quirky coverage of DC Sports, and especially RGIII, is a daily must-read. But it's beyond frustrating to see how major media takes the Bog's articles and re-posts quotes, which carry a different context that gets consumed by the masses. I like to think of the Bog as that amazing DC bar I love that got pillaged by tourists.

My knee is getting better every day. The doctors say I'm ahead of schedule. My goal is to return healthy in week one but if I'm not ready then i will wait until i am, however long that is. My first NFL season and my injury that ended it showed me a lot about the league, my team and myself. i know where my responsibility is within the dilemma that led to me having surgery to repair my knee and all parties involved know their responsibilities as well. I m looking forward to playing the game we all love so much again and not behind at the negative. thanks for the overwhelming level of support that i've received, sic em bears and hail to the redskins!!

What did several media outlets and blog do? Focus on just this part of the quote:

Wilbon went on ESPN to say "it's a direct shot at Mike Shanahan" and then Boom Goes the Dynamite. I would bet a full paycheck that RGIII's context of that quote is realizing his responsibility is to protect himself and communicate his injuries to the coach and staff. How anyone can run with negative connotations as fact there baffles me.

"You look at us from top to bottom out here, there's a bunch of great players. And we don't need people saying we're the best right now. But when it's all said and done, I really feel like this team's gonna win the [NFC] East."

"Feel" and "saying will win" are two completely different things. But who cares, right? It's funny and that's 1 million page hits!

I purposely did not post a single wedding registry story on Hogs Haven due to the fact it warranted zero attention. Fans did something nice and RGIII thanked them. It's a nice story and the Bog had it covered. The week of ridiculousness that ensued from external media and blogs is what destroys athletes' desire to talk to media.

RGIII tweeted a picture of himself in front of all the empty boxes. Naturally, outlets ran with it as being pompous. Please. If his eyes happened to be half shut should he be tested for weed? I just wish the mentality of looking for the negative instead of assuming the positive would apply with people today.

Sean Taylor stopped talking to media altogether because of how the media focused on one negative thing he said versus all the positives. In short, it's better to say nothing at all then something that ends up with a week long flurry of texts and phone calls from Redskins PR and his agent trying to do damage control.

RGIII's personality makes both the ups and down of the Redskins season better ...let's not ruin that...even more so than ever with Chris Cooley gone. 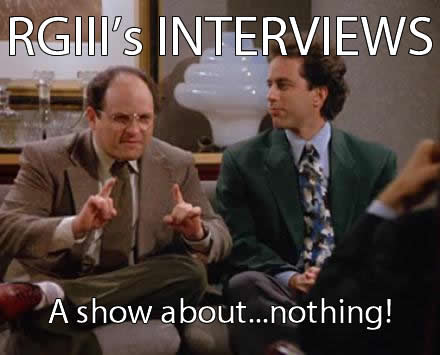