Share All sharing options for: Redskins Offense Next Step: Read-Option Packaged With Routes?

The theme around the Washington Redskins the past few weeks has been about protecting star quarterback Robert Griffin III and the use of the option in the Redskins offense. I started looking back through the Redskins season and came across a touchdown pass to Pierre Garcon against the Giants in week 14. It looked like a play-action pass, but I wonder if it was more. 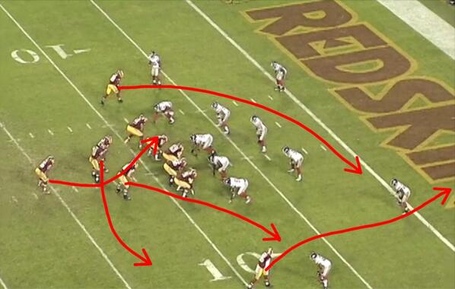 Garcon is at the top of the picture running a crossing route between the linebackers and the safeties. Leonard Hankerson runs a deeper clearing route into the back of the end zone while Logan Paulsen will sneak out into the flat. 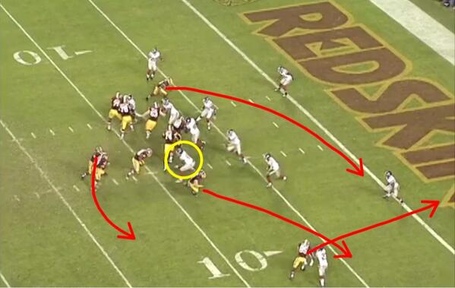 While it looks like play-action, and possibly is, the backside defensive end crashes on the run. On a read-option play, that would tell Griffin to pull the ball and keep it himself. 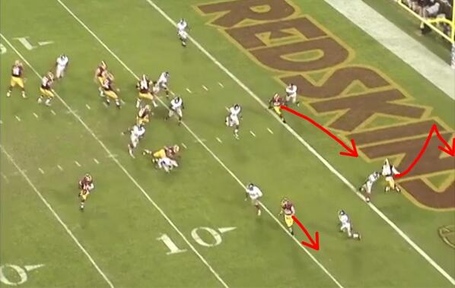 But rather than running past the line of scrimmage, Griffin rolls to his right as he would on a bootleg or sprint play. Hankerson plays a crucial role here, running inside, but then cutting back towards the sideline to clear the space for Garcon to run into. 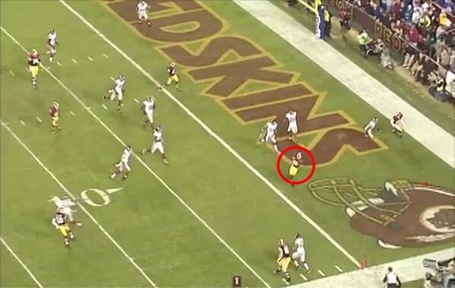 Garcon is too quick for any defender to keep up with and it ends up being an easy touchdown pass for Griffin.

That could have just been a play-action pass. But I wonder if Griffin did actually have the option to hand off based on the defensive end. I could certainly see the Redskins developing some more plays like this where Griffin can keep the ball, roll outside the pocket and pass rather than having to run himself. But if the defensive end stays put or charges at him, he can hand it off to Morris and avoid taking hits that we saw him take on bootleg plays.