Since Memorial Day is all about honoring veterans, Hogshaven.com will be honoring players that spent AT LEAST 10 years on the Washington Redskins.

Brigman "Brig" Owens was born in Linden, Texas on February 16, 1943. He grew up in California, where, at age 11, a former boxing champion and World War 2 marine (thank you veterans) by the name of Pete Liapis, caught him trying to steal bicycles in front of the Fullerton Boys Club. Pete sat Owens down and told him he had two choices; Owens could either focus his energy on sports or be sent to juvenile hall (Anyone else wish a former marine scared you into a successful NFL career?). Owens, of course, selected sports, excelling in football, basketball and baseball. Football ended up taking him to the University of Cincinnati, where he became an All-American quarterback leading Cincinnati to 2 straight Missouri Valley Championships. Owens, after reflecting on his college career, said his greatest accomplishment happened off the field. He met his wife, Patricia, after standing in a registration line for over three hours just to talk to her. Owens was drafted in the 7th round, 89th overall by the Dallas Cowboys in the 1965 NFL Draft. The Cowboys converted him to safety, and he spent his rookie year on their practice squad. The following year, in 1966, the Dallas Cowboys traded S Brig Owens, OG Jake Kupp, and OL Mitch Johnson to the Washington Redskins for DB Jim Steffen and a draft pick.

Even though tackles, sacks, and passes defended weren't recorded in his era, looking at the numbers above, you can easily tell that Brig Owens made a huge impact on the franchise. Owens became a starting safety for the Redskins in his 1st season with the team. During his career, he became a defensive captain and one of the leaders on the defense. Not only was he a leader on the field, but off the field, he was an NFLPA player representative for the Redskins for 7 years. He played a significant role on the Redskins 1972 Super Bowl team, a game they eventually lost, but Owens had a key interception of Bob Griese in the end zone to prevent them from putting points on the board. His best individual performance came in a 1966 regular season game against the New York Giants, where he scored 2 defensive touchdowns. A 62 yard interception returned for a touchdown and a 62 yard fumble returned for a touchdown. Washington won that game 72-41. To this day, that is still the highest scoring game in NFL history. If you ask Owens himself, he looks fondly on those moments, but his favorite moment as a Redskin was eliminating the Dallas Cowboys from the 1972 NFL playoffs in the NFC Championship game. He said being traded from the Cowboys was the "best thing that ever happened to me." After 12 years with the Redskins, Owens retired after the 1977 season, with 36 career interceptions (2nd all-time in Redskins history), 686 interception return yards (1st all-time in Redskins history), 10 fumble recoveries, and 5 total touchdowns. He was voted to both the 80 Greatest Redskins and the Redskins Ring of Fame.

After retirement, Owens attended Antioch School of Law (now called David A. Clarke School of Law at University of District of Columbia), and received his law degree from Potomac Law School. By 1979, he was working as an assistant executive director and associate counsel for the NFLPA (as you recall, he represented the Redskins for 7 years for the NFLPA during his career) until 1984. He was part of the negotiating team that developed a new Collective Bargaining Agreement with the NFL at the time. In 1985, he opened his own business called Bennett & Owens, a commercial real estate development company that also represented professional athletes. Also in 1985, Owens founded a non-profit program called "Super Leaders" with former NFLPA executive director, Gene Upshaw. The program was designed to provide high school and middle school students with positive leadership skills. With 98% of participants graduating high school, and 75% going to college, over 24,000 students have been helped by the "Super Leaders" program. He also created the "Pro Athletes Youth Foundation and Community Service Department," which was chosen by the Department of Education as a top exemplary program in the nation after raising more than $10 million for youth development across 10 cities. In 1990, Bennett & Owens sponsored 65 6th grade students for the "I Have a Dream" program. The program guaranteed payment of student's college education if they graduated high school. Over half of those 65, graduated college. Also in 1990, Owens was 1 of 6 selected to receive the NCAA Silver Anniversary Award for his commitment to community and country. In 2008, Brig Owens received an Honorary Doctorate in Humane Letters at the University of Cincinnati which is the highest award given by the school. He still lives in Virginia with his wife of over 45 years, Patricia. They have two grown daughters and two grandchildren.

On this Memorial Day weekend, we salute YOU, Brig Owens, for your tremendous contributions to your community, to your country and to the Washington Redskins. 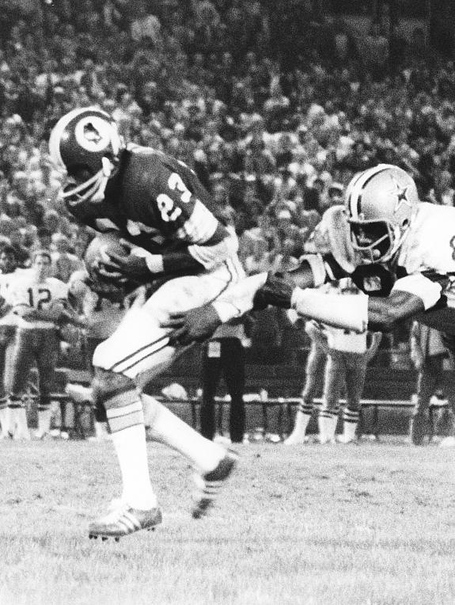