The use of no-huddle offense is spreading throughout the NFL. The best teams are using it. The Broncos, Patriots, Packers and Saints among others run this concept every week and have great success doing so.

Peyton Manning and Tom Brady have led the way in the no-huddle offense. As veteran quarterbacks, they know their offense like the back of their hand. They can communicate using hand signals and key phrases that quickly organise the entire offense and tell each player where to line up and what their assignment is.

With the ability to get everyone lined up quickly without having to huddle, Brady and Manning not only stop the defense from substituting, but they get more time to survey the field and read what the defense is giving them. A common misconception is that the no-huddle and the hurry-up are the same thing. But in reality they aren't. Quite often Brady and Manning will run the no-huddle, but will wait until the last second of the play clock to snap the ball. This gives them the most time possible to analyse the defense.

Brady will move around guys like Aaron Hernandez, Rob Gronkowski and Stevan Ridley to create match-ups that he likes. Here against the Broncos, the Patriots line up with a run heavy formation. 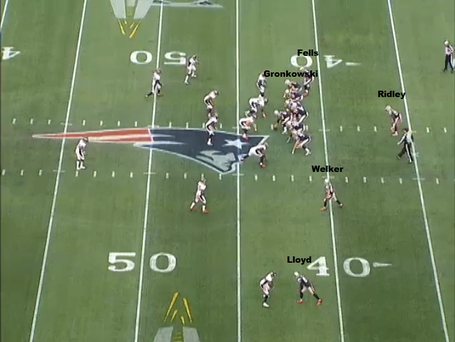 Tight ends Gronkowski and Daniel Fells (replacing the injured Hernandez in this game) line up on the right side of the offensive line. The two receivers, Wes Welker and Brandon Lloyd. Ridley is in the backfield and takes a hand off to the right for a short gain.

The next play the Patriots use the same personnel to give this look. 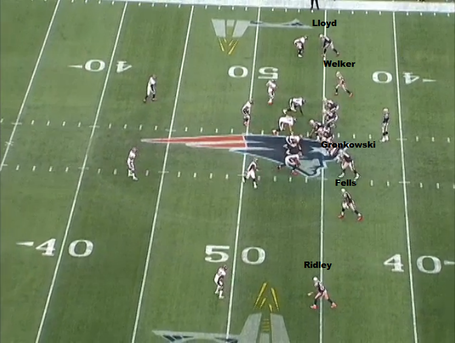 The Patriots were in the no-huddle, so they couldn't substitute. But with the versatility of their players, they are able to show drastically different looks on back-to-back plays, while the defense struggles to find a solution.

The Broncos defense is all over the place here; one linebacker is caught between Gronkowski and Fells, Ridley occupies a corner purely based on his place in the formation. That corner would be much more effective on the top of the picture covering Welker or Lloyd, but is instead wasted on Ridley because the defense can't adjust to the no-huddle. In the end, Welker gets matched up with a linebacker, which has always been a match-up Brady loves to take advantage of. They complete an easy route and pick up the first down.

The key to success with no-huddle offense is based around three things. The first is obvious, having a quarterback who not only has the skill to run it, but the mental capacity and awareness to know the role of every player on every play. We're talking about guys like Brady, Manning, Drew Brees, Aaron Rodgers on the teams mentioned above.

Second is to have the supporting cast. In New England, the Patriots gave Tom Brady many versatile weapons, as mentioned before, that are able to move all across the formation. This effectively gives the offense the ability to substitute while the no-huddle stops the defense from doing so. The Broncos and the Packers take a slightly different approach. They don't have quite the same versatility, but they do have extreme strength in depth at wide receiver. This allows them to spread out the defense and attack third or fourth-string corners. Once a defense surrenders and switches to zone coverage, they're easy to pick apart for the likes of Manning and Rodgers.

The third point ties in with the first. You have to be able to efficiently communicate the plays to the rest of the offense. You have to have key words or phrases and hand signals that get everyone on the same page. If the team has to be in earshot to hear the entire play-call, that defeats the purpose of the no-huddle.

Last season, the Redskins landed quarterback Robert Griffin III. We all know he has the skill and mental ability to run the no-huddle. He ran up-tempo spread offenses in colleges. Count this as a tick in the Redskins favor. Between him and Kyle Shanahan, they could easily come up with a form of communication for a no-huddle offense, even leaning on the things Griffin used at Baylor. Check that one off the list.

So that leaves the supporting cast unchecked. The Redskins receivers are pretty solid across the board, but they aren't as strong as say Green Bay or Denver. However, the Redskins recently drafted two very versatile weapons in tight end Jordan Reed and running back Chris Thompson. I've talked previously about the ability Reed has, but his versatility is unique.

As you can see from the picture above, Reed has and can line up at just about every skill position there is. He can run routes and catch passes from any of the positions marked with an 'R' above.

While he isn't someone you'd line up at h-back or tight end like you would with Reed, Thompson has the receiving skill set to move around from running back to slot receiver, and potentially even take some snaps on the outside. His speed and elusiveness enables him to take any given play for a touchdown.

If the Redskins find themselves with these two guys on the field against a favorable defensive look, they could change to the no-huddle to stop the defense from substituting and exploit match-ups. Having two guys so versatile essentially gives the Redskins two subs while the defense can't substitute at all. They can play around with their formation pre-snap; maybe try to get Reed on a smaller cornerback for a jump ball or Thompson on a wheel route against a linebacker. The defense will either have to get inventive with how they cope with it, or burn a timeout that could be helpful later on in the game.

Now the problem with this is that the Redskins will have little time to practice the no-huddle this off-season. As we all know, Griffin recovering from his knee surgery and is likely unavailable until preseason or later. Kirk Cousins has the ability to run the no-huddle, but practicing with Cousins and playing with Griffin could make for a difficult transition. But down the line, the Redskins have all the pieces they need. If Mike and Kyle Shanahan can put it together correctly, the Redskins could have a very dangerous no-huddle offense in the future.