I've had a lot of great Redskin memories but nothing beat hearing the crowd in Cowboys stadium chant RG3's name. Classic. 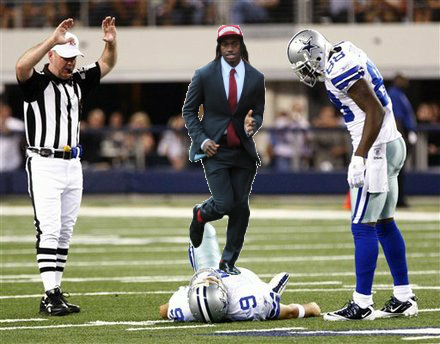 Now we had a tough task this week, we were asked "what is our fondest Redskins memory?". I thought about this one for a while, should I choose one of our Super Bowl wins? Each one was special in its own right. What about the NFC championship game verse Dallas in 1983? That was a great one. I decided I was going to be a prisoner of the moment. Now for those who don’t know, I hate Dallas, no really I hate the Cowboys and to me any game we beat them ranks as high as a Super Bowl win (I know, I know but I REALLY hate Dallas). Anyway I could pick the last game of the 2012 regular season where we became NFC East champs for the first time since 1999 and Alfred Morris absolutely ran over the Cowboys(!) but I thought there was one game that stood out even more, so let me set the stage:
The date is November 22nd, 2012…That’s right, it’s Thanksgiving! The Redskins came in at 4 - 6, looking for their 2nd win in row after beating the Eagles the week before. The Cowboys were 5 - 5 with 2 straight wins over the Browns and Eagles. The rest of us were sitting at home or a relative’s house eating turkey, stuffing, mashed potatoes, cranberry sauce (I’m getting hungry) and watching football. The Redskins were the 4 o’clock game, not so early I was still eating and not so late that I’d already fallen asleep, perfect.
The Redskins started slow going 3 and out on their first possession with an intentional grounding that backed them up to the 8. After the punt the Cowboys started at the Redskins 49 and managed to get all the way to the 7 before the Redskins defense stiffened up and the Cowboys were forced to kick a field goal. 3 – 0 Cowboys. The Redskins and Cowboys then traded a couple 3 minute drives where the Skins looked out of sync and the Boys committed penalties. The fireworks started on the Redskins third drive of the game, they started on their own 7 but quickly moved to their own 37 before a false start penalty by Aldrick Robinson put them at 1 and 15 at the 32 yard line. Robinson made up for it on the next play as RG3 sucked up the defense on a beautiful play-action fake and hit Robinson in stride for a 68 yard touchdown. Redskins 7 -3. The next Cowboy drive ended with a Dez Bryant fumble courtesy of Josh Wilson and ended with an Alfred Morris 1-yard touchdown. Redskins 14 – 3. The Cowboys went 3 and out on the next series, 5 plays later RG3 threw a bullet over the middle that was slightly behind Pierre Garcon, who reached back and raced 59 yards for a beautiful touchdown. 21 -3. After the kick-off the best bad quarterback in the NFL, Tony Romo threw a pass to DeAngelo Hall who returned it to the Cowboys 30. A couple plays later RG3 threw a gorgeous back shoulder touchdown pass to Santana Moss who did a great job keeping his feet in-bounds. At the half it was Redskins 28 – 3. 28 to 3 hmmm I still remember how it felt (my face hurts I’m smiling so hard). By the end of the day after thwarting a half-hearted Cowboys comeback the score was Redskins 38 to 31.
As great as that was, that wasn't even the best part, after throwing for more than 300 yards and 4 touchdowns the crowd In Cowboys stadium started chanting "RG3!RG3!RG3!". It was great, a Redskins quarterback who is SO good they chant his name in his rivals stadium. Wow. That’s as good as it gets for me.