North Korea is Redskins Country Thanks to Mark May

Share All sharing options for: North Korea is Redskins Country Thanks to Mark May

This is probably the first and last time I'll mention current politics on this blog, but stay with me. As of five hours ago, this article was posted on Fox News:

South Korea said Thursday North Korea moved a missile with "considerable range" to its east coast after an unnamed spokesman for the North Korean army warned the U.S. Wednesday that its military has been cleared to wage an attack using "smaller, lighter and diversified nuclear" weapons.

I'm sure I'm one of the 99.99% of America that fears a nuclear attack from the Olsen twins more than North Korea. If the Russian military with little notice can destroy an asteroid travelling at 66,000mph, I'm sure our fine military can handle a long-range North Korea missile (I'm getting a "Spies Like Us" flashback).

I think I know why the North Koreans might be so upset lately. Perhaps they found "the sticker." Via a 1988 L.A. Times article from when the Summer Olympics were in Seoul:

NBC announcer Bob Costas, while visiting the demilitarized zone that divides North and South Korea, walked into a Quonset hut used for meetings between the two sides.

Wrote Rick Warner of the Associated Press: "In the middle of the hut was a desk. When Washington Redskins lineman Mark May visited the DMZ on a USO tour three years ago, he stuck a Redskins sticker under the desk when the North Korean guards weren't looking.

The sticker was still there three years later.Can you imagine the Hogs walking into North Korea? Damn I wish video cell phones and social media existed back in 1985 (at least for this one day). Via the fine staff at SB Nation, we were able to reach out to former Redskins and current ESPN analyst, Mark May, to confirm this. May responded:

Yes under N Korean side of table 38th parallel Panmunjom.

Do we have any Redskins' fans military in S. Korea that can confirm it's still there? I wish I could dig deeper on this story. I still am trying. As for North Korea, I only have one thing left to say....Maaaatt Daaaamon: 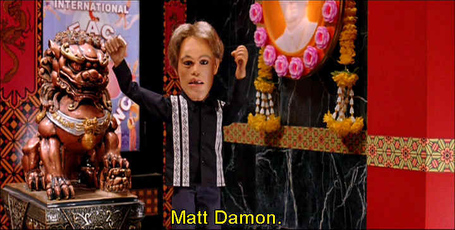