One of the Redskins main objectives this offseason was to surround star quarterback Robert Griffin III with talent to work with. In the third round they took play-making tight end Jordan Reed, who I took an early look at on Friday. But one of the more intriguing picks from my point of view came in the fifth round. With the 154th pick of the draft, the Redskins selected FSU running back Chris Thompson.

Thompson's measurable's are far from outstanding. He's just 5'7" and weights 192 pounds. But when you watch him, he jumps out at you. He has rare speed and elusiveness that make him extremely tough to catch in the open field. Adam Schefter made a good point on twitter yesterday after the selection was made.

Redskins draft FSU RB Chris Thompson in round 5. Redskins RB coach Bobby Turner never picks a back this high without loving him.

Before we get carried away, he won't be an every down player and you don't want him running between the tackles and taking hits. Thompson won't break many tackles, he doesn't have the strength of an Alfred Morris. In fact, he's almost the polar opposite. He's a guy you want to get him to the edge and just watch him explode. Here's an example of him on outside zone run.

You can see there, a linebacker comes across and appears to have a good angle as Thompson is forced to cut back inside, but Thompson turns on the burners and bursts past him, leaving him in the dirt.

It's not just his speed, he's incredibly quick and agile which means he loses very little speed when cutting and changing direction. He can make defenders charging up to the line of scrimmage completely miss on a tackle with a simple fake one way or an other.

Thompson is a guy you cannot allow to get to the outside, but the defenders here couldn't do anything about it, he was past them before they could even react.

However, I don't think Thompson's role will involve too many pure hand offs like the plays above. I think he takes over the role Brandon Banks played (or at least, attempted to) last season. He has reliable hands out of the backfield or even in the slot and is a prime candidate in the screen game.

What I like about this screen is that he shows he's smart enough to know when to turn on the jets and when to be patient and work with your blockers. He decides to hold back slightly to allow the blockers to get out in front. But when the time comes, he lets loose and displays great balance at speed tip-toeing up the sideline to stay in bounds before eventually being knocked out.

The Redskins had screen option passes to receivers in the flat on a lot of designed runs last year. A lot of the time, nobody even noticed it because they handed the ball off to Morris or completed a pass on the other side of the field. But this play against the Vikings is a perfect example. 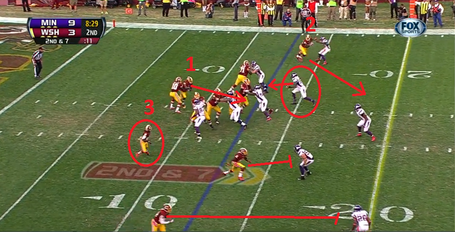 See how Griffin is reading the linebacker who is coming up to play the run. Griffin can hand off or throw the slant to Fred Davis in behind depending on how that linebacker reacts to the play. But Griffin also has a third option on the play. If the pre-snap read dictates it, Griffin could take the snap and immediately throw the screen to Banks in the flat. Chris Thompson could be a perfect guy to be on the end of those screen passes and be yet another worry for defensive coordinators around the league.

The other part of Banks role last year was to be the outside pitch man on triple option plays. We saw it often against the Bengals in particular. Thompson is no stranger to being the pitch option, he ran it plenty of times at FSU with EJ Manuel. Here's one example.

Here the quarterback, Manuel, takes the snap and runs to the edge. He draws in the backside defender and pitches it out to Thompson. The fullback then blocks the incoming linebacker, giving Thompson an easy run to the end zone.

If there was something the Redskins offense lacked last year, it was explosiveness in this role. Banks tried and failed to provide that spark, can Chris Thompson step up to the plate?