The Washington Redskins decided to stay true to their board in the third round of the NFL draft. They had bigger needs at safety and right tackle, maybe even wide receiver, but they saw a tight end in Jordan Reed that offers too much value to pass up with the 85th pick of the draft. He's a tight end in name only; in reality Reed will be a huge weapon in the Redskins offense that will create match up nightmares for defensive coordinators.

Reed measures in at 6'2", 236 pounds and really doesn't offer much as a blocker other than effort. He's not a guy you'll place inline and ask him to take on defensive ends or linebackers. Reed is one of the increasingly popular 'joker' tight ends. He's versatile enough that he can line up at H-Back, in the slot, split out wide as well as an inline tight end. Think about how the Patriots use Aaron Hernandez and you'll get an idea what Jordan Reed will offer your team.

He runs good routes, better than a lot of tight ends will run, but that doesn't mean he can't improve on them. But his best attribute is his yards after catch ability. He has cutting ability similar to that of a running back in space that makes him incredibly hard for bigger linebackers to tackle him, while his size is often too much for smaller defensive backs to bring him down. Here are a couple examples of his ability after the catch. First up, Reed runs a simple route into the flat and elude several defenders to turn it into a big gain.

That gif comes courtesy of SBNation blogger Danny Kelly in his article about joker tight ends, something I highly recommend you go read.

Next we have a designed tight end screen, once again from Danny Kelly's piece linked above.

Reed is a big playmaker with the ball in his hands, but with the innovative Kyle Shanahan in charge of the Redskins offense, I can't wait to see both Fred Davis and Reed on the field together. In the huddle, Davis and Reed will appear as a two tight end set, but both have the ability to split out wide or line up in the slot. If the defense is thinking two tight end set, then they will probably play their base defense. 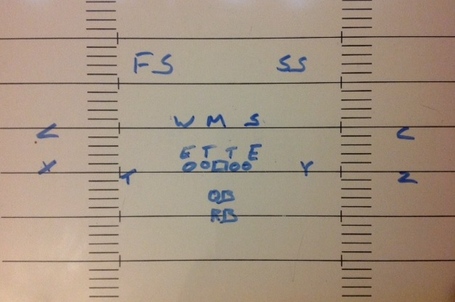 The way that is drawn up is an immediate problem for the defense. They have a matter of seconds to decide how they are going to cope with two legitimate receiver threats at tight end that are both lined up in the slot. With Fred Davis and Jordan Reed, that formation is effectively a spread, four receiver formation matched up against a base defense. Does the defense try to use the 'Will' and 'Sam' backers to cover them? Do they bring down one or both safeties and risk leaving the deep portion of the field open? Do they play a zone coverage?

That's just one example of what adding Jordan Reed could allow this offense to do. There are plenty of other ways the Redskins can and will use him, which I intend to get into in the coming weeks after the draft.