Did RGIII and his former Baylor teammate Terrance Williams Spill the Beans on a Redskins Draft Plan?

A cryptic Twitter exchange between Robert Griffin III and former Baylor wide receiver Terrance Williams could indicate who the Redskins have their eyes on come draft day.

Share All sharing options for: Did RGIII and his former Baylor teammate Terrance Williams Spill the Beans on a Redskins Draft Plan?

On Friday evening, a rather interesting and perhaps telling exchange on Twitter took place between Redskins quarterback Robert Griffin III and his former receiver at Baylor, Terrance Williams.

Williams will be entering the NFL draft on April 25, which is 13 days away, and he took to Twitter to show his excitement. However, he may have inadvertently showed a little more than just that: 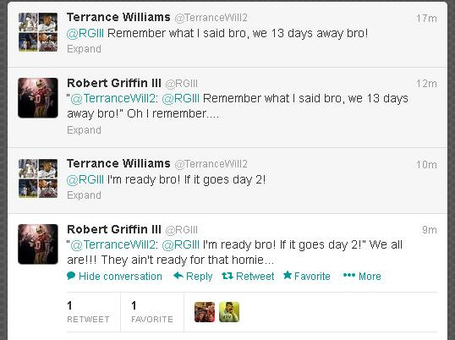 It's out of context and cryptic, but from what exists, it could be taken to mean that the Redskins have an interest in drafting Williams.

There aren't any conclusions that can be drawn from this at this time, but it also doesn’t rule out the possibility of Williams being a target for the Redskins. Maybe Williams telling Griffin "I'm ready bro" could just mean he's ready to become a pro, and not necessarily a Redskins.

In Williams’ junior season at Baylor with Griffin under center, the two connected for 59 catches for 957 yards and 11 touchdowns. Williams production continued in both bulk and efficiency during his senior year for 97 catches, 1,832 yards and 12 touchdowns. Williams is a likely day-two pick in the draft, and could very well be available when the Redskins select at 51.