Robert Griffin III went to see the premiere of the movie Oblivion, and gave the internet a picture for the ages. 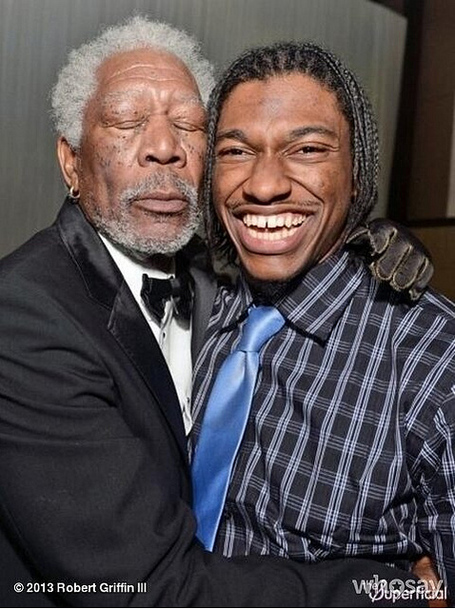 It's good that Robert Griffin III is in high spirits and ahead of schedule in what could easily be a dismal offseason for the young phenom. Instead of wallowing and moping while he's rehabbing his torn ACL, he's taken to social media frequently, posting anything from uplifting blurbs on Twitter to pictures of himself decked-out in circus garb.

This, however, takes the cake as far as uplifting tweets go. Griffin tweeted earlier that he went to the premiere of Oblivion, and that's presumably where this photographic masterpiece was taken.

I mean, just look at this. How the internet hasn't imploded from the amount of awesomeness in one camera frame is beyond me. Why are Morgan Freeman's eyes closed? Why don't I care at all that they are? Is he mid-lullaby? Why is that fitting? Why is Freeman wearing one glove? Why does that one glove look like it could support a perching falcon with no trouble at all?

Either way, it's difficult to not be in high spirits when you see the face of the Redskins franchise being as such too. This is just a friendly reminder that the process of rehabilitation doesn't have to be all doom and gloom, and that the best days for Griffin and the Redskins are very much on the horizon.