The Redskins running back stopped by a club and left shortly after, yet when things went bad hours later in the club, Royster still gets a bad rap. It's not right.

Share All sharing options for: Evan Royster's Night on the Town Should Be a Lesson to Fans Too

layers in the club has been a topic we've debated on this website many times before. Quotes such as "Can't they just stay out of the club for the four months of the season?" and "Just drink at home" are common ones I hear. The truth is players need to unwind just like anybody else. It's easy for fans to be judgmental and assume that any player at a club means they're dancing on a couch and throwing champagne bottles. That's not the case usually and Evan Royster recently got caught in a bad situation for doing nothing wrong...or even close to it.

This past Thursday morning at 2:50am a man was shot in his BMW after an altercation with another patron outside a club in a very nice area of downtown D.C. (two blocks from the Mayflower Hotel). "Evan Royster was at that party?!??! WHY CAN'T PLAYERS STAY OUT OF THE CLUB!"

Take a deep breath people. Royster left before all the mayhem went down and he was only there to support a friend's birthday party:

A witness says the shooting may have been the result of a dispute between patrons of a nearby bar where several NFL players, including Washington Redskins running back Evan Royster, appeared earlier that evening. Royster is safe and left the event before the shooting occurred a source confirms to WNEW.

What complicates things is when fans and media see flyers with players on it. The party mentioned above actually had Royster's name and picture on it: 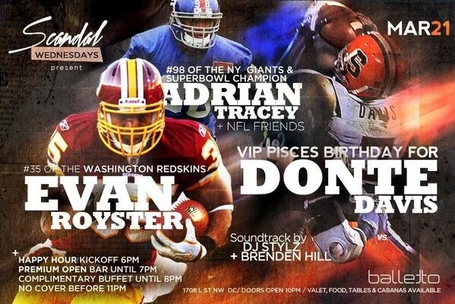 Promos like this certainly make it seem Royster is about the party scene. What's not surprising is that clubs never or rarely ask for permission before making these flyers. They hear someone famous is coming to a party and smack it on the flyer:

@Evan_Royster: heard i was getting bashed on the radio for being out last night... showed up for an hour so a friend could get a free table... left hours before shooting

.... I gave no1 my permission to put my name or picture on any ad... simply told a friend id show up for his bday... had no idea that would be published

I've attended a few Super Bowl parties where NFL athletes are partying...including Pro Bowlers. The truth is some do cut loose, but most of them are drinking bottled water and are there just to socialize. We all remember Andray Blatche's lap dance Tuesdays flyer. I'm not about to defend Blatche, but Clinton Portis, Santana Moss, the Hogs....there is a way to balance a social life and a NFL career. Let's make sure we don't jump on players without knowing the facts. Now, having said that, Fred Davis and Santana Moss apparently will be in Miami for a party tomorrow night....yet the flyer has a picture of Trent Williams. 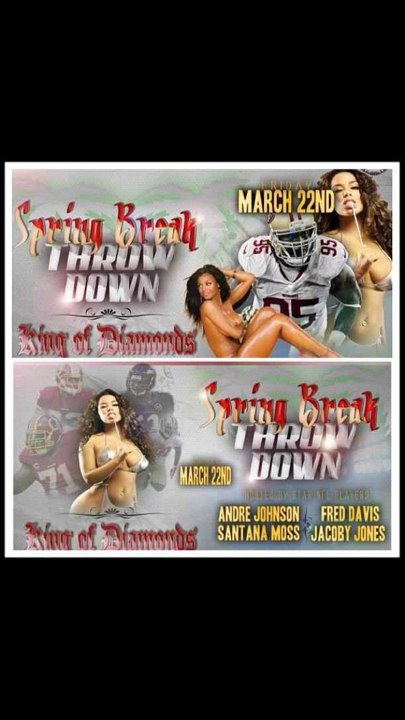 If NFL players follow the common sense rule, "Nothing in the club good happens after 1AM," 99% of the problems like Fred Davis and Trent Williams' recent ones would disappear. Truer words have never been spoken. The girl to guy ratio drops down to ~25% and that's just a recipe for disaster with hundreds of dudes that dropped $1K on their outfit and are wired on Red Bull and Vodkas and who knows what else.The Redskins running back stopped by a club to say hello to friends, left shortly after, and that's the end of it.

Lebron James regularly visits clubs for every road game he goes to getting an appearance fee and a chance to unwind from the grind and travel. It's all part of the game.