Share All sharing options for: All-22 Film Breakdown: The Redskins Running Game

With it being the 'dead' period in the NFL, I took some time this week to look back and watch some film on the foundation of the Redskins offense, the run game. It evolved as the season went on and by week 17 against the Cowboys, it had become one of the most threatening rushing attacks in the NFL. The commitment to the option plays and the pistol formation were vital elements in such success, but incorporating the traditional Shanahan zone plays were equally important. I wanted to breakdown the three most common series of plays we saw from the Redskins. It all starts with the 18-19 stretch run series.

The 18-19 series of run plays are what we all know as the stretch run game. These are the outside zone runs that spearheaded Mike Shanahan's super bowl winning teams in Denver. The numbers refer to the direction of the run, odd numbers mean the running back is taking the hand off to the left, even numbers tell the running back to run right. So an '18 Strong' run would be a run to the right, while a '19 Weak' would be a run to the left. On these plays, the back will run to the original spot of the tight end and read the defense. If he reads a ride to the edge, then he continues running towards the sideline before planting his foot and getting up the field. However, if the defense over-pursuits the edge, the runner will have lanes in which he can cut-back into.Here's an example of that. 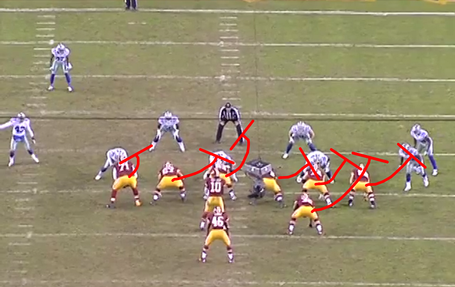 The offensive line are going to slide to the right and block defenders who enter their zone by either forcing them to move towards the sidelines, or pushing them past the running in the backfield should they penetrate the line of scrimmage. 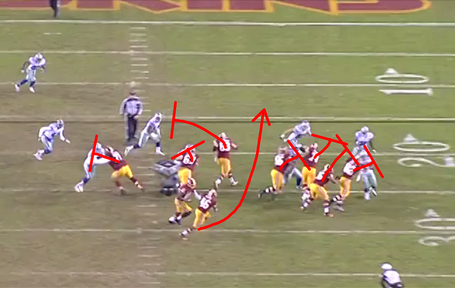 Morris receives the hand-off and is running towards the outside. The Cowboys defenders over-pursuit to the play-side while center Will Montgomery is able to get out in space and cut off the backside of the play. You can see the big cut-back lane already developing for Morris. 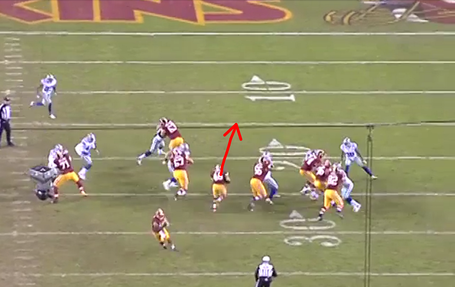 Morris attacks the hole and is able to pick up a first down on the play.

These kinds of runs are nightmares for defenses. They must stay disciplined and hold their assignments otherwise holes, like the one above, appear.

The next set of plays in the Redskins armory is the 16-17 counter series. These plays set up the defense to believe the run is headed in one direction, before the running back cuts back completely to the other side of the play. The Redskins will run a healthy doze of the 18-19 plays to get a defense committing to pursuing the play-side of the run before using a 16-17 counter to catch them out of position. The best example of this came against the Cowboys on one of the Alfred Morris touchdown runs. 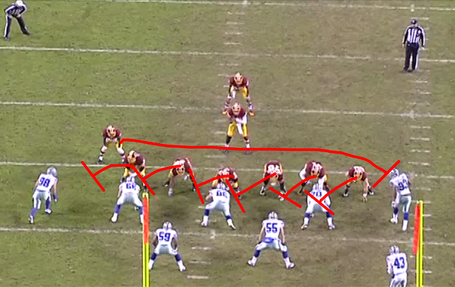 As you can see in the play above, the offensive line will all zone block to their right, giving the appearance of the run to that side. Fullback Darrel Young will come back across the line to block the backside defender. 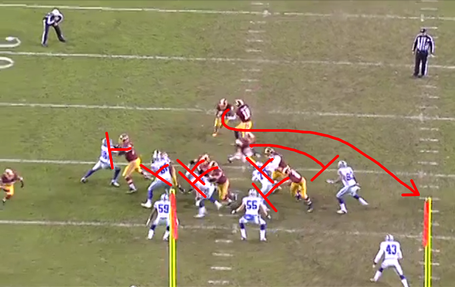 As Morris takes the hand-off, the Cowboys defenders are drawn in towards the right side of the offensive line. 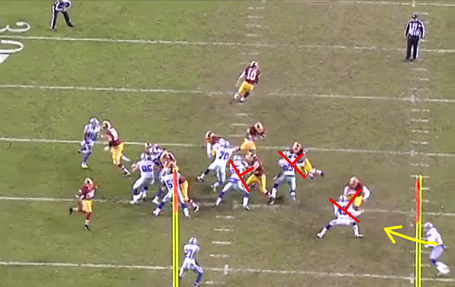 Young is able to cut off the backside defender while a receiver comes down to block the safety. The corner on the backside was shadowing the receiver and gets drawn into a bad position. 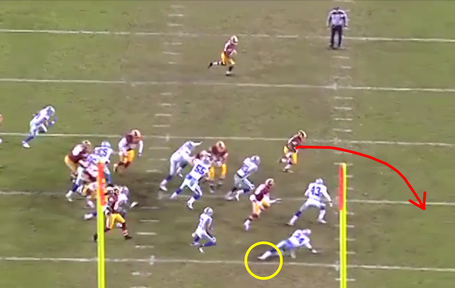 Morris goes untouched and is able to bounce it all the way back to the backside of the play. The only man who could have made a play on Morris slips trying to adjust to Morris cutting it back. 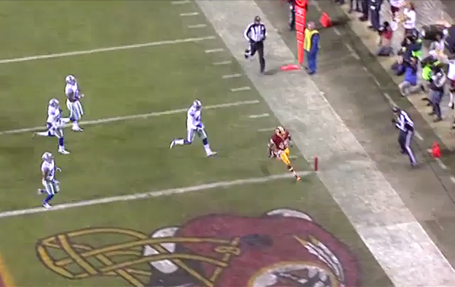 The Cowboys were fooled and the play results in a touchdown. These counter plays were used sparingly when compared to the 18-19 series, but they were incredibly effective. It forces the pursuing linebackers and safeties to hesitate for an extra second, which improves the runners chances of gaining positive yards.

I've discussed a play from this series before; but this is one of the Redskins option series. These are inside zone plays in which the quarterback reads the purposefully unblocked backside defender and has the option to either hand it off or keep it himself. They often like to add the 'Tiger Sift' tag to the play, which tell the tiger man (usually a fullback or H-Back in the pistol) to sift back across the line and cut off a 'scraping' linebacker should the quarterback keep the ball. The link above gives an example of when the quarterback keeps it, so here's an example of a hand-off. 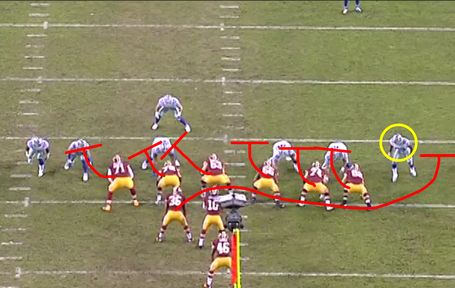 The offensive line will zone block to the left, deliberately leaving the defender circled in yellow unblocked. Young will sift back across the line, leaving the backside defender unblocked, and act almost as a lead blocking for Robert Griffin III should he keep it. 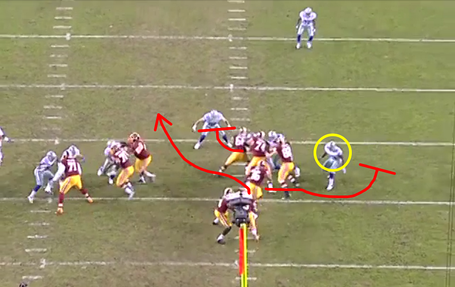 The defender is waiting for a block from Young, just like earlier on the 16-17 Counter series. But Young is going to avoid the block at the last second. With the defender frozen, Griffin hands it off to Morris, who has a hole to attack on the inside. 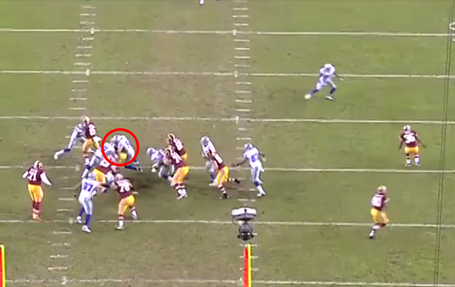 Morris is wrapped up for a solid five yard gain. From this picture, you can see how the unblocked defender was taken out of the game by the option. You may also notice Young is in position to lead block down the field for Griffin had he kept it.

These were the three most common series of plays used by the Redskins towards the end of the season. They all work on similar principles and run together nicely. The adoption of the Pistol formation and adaptation of these plays to fit that formation has been nothing short of fantastic, as the results have shown. Being able to run these out of extremely similar (at times, identical) looks, the defense is never sure of whats coming. That allows Kyle Shanahan to use one play from one look to set up a different play from the same look and catch the defense off-balance.

The running game evolved into this as the season went on, but the most exciting thing from my point of view is that it starts next season from this level of effectiveness. I can't wait to see how it evolves further and what the run game looks like at this point next year.