Andy Reid, who knows something about trading veteran, terrible Quarterbacks, changes strategy and instead trades away draft picks for an average, veteran Quarterback.

Share All sharing options for: Andy Reid Trades for Alex Smith and Passes Gary Busey As Craziest Person on Earth

Let's start with the facts...

As @jayglazer reported, 49ers have agreed to trade Alex Smith to Chiefs. Trade will be for draft picks - as in plural, per NFL sources.

OK, that's fine and dandy. And then things gets weird:

So, the 49ers, who had a backup, upset QB that they had to move...get a 2nd round pick and a mid round pick next year for? Is Cerrato on the Chiefs and I didn't get the memo? That amount of picks seems high...like Lawrence Taylor high. The first few picks of the 2nd round of any draft still has a wealth of quality players. The Chiefs instead get back a soon-to-be 29 year old Quarterback who has never thrown more than 20 touchdowns in a season.

The irony here is that Any Reid is usually the one trading away terrible veteran Quarterbacks for draft picks (Kolb, McNabb).

Alex Smith's QB rating was 104.1 for the ten games in 2012 he played in before getting benched after a minor injury, but let's not forget how much the 49ers RB game and OLine (all five are Pro Bowlers) really get credit. Andy Reid LOVES to throw the ball...and he has Alex Smith now as his QB?

Since jumping on the bash wagon is rather easy to do with breaking news. I quickly checked SB Nation's Chiefs' website, Arrowhead Pride, to see what Chiefs fans are saying. It's bad....real bad.

If Chiefs fans are looking for a positive, they at least now have a Conference Champion Quarterback. I can't see anyway this trade pays off for the Chiefs. At the least, the 49ers surely would have made this trade for a 3rd or 4th round pick only. He surely would have been released anyway. 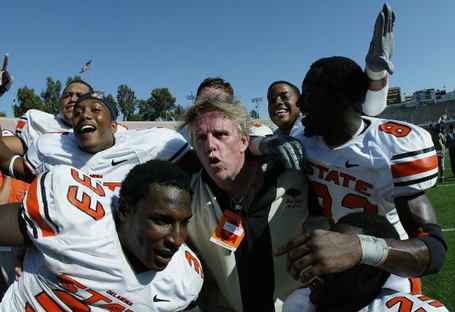