Editor's note: I wrote this article for a British NFL Draft site Inside The War Room a few weeks ago. But with safety being a big need for the Redskins, and Jonathan Cyprien being one of my top safeties in this class, I thought I'd pass it along to the Hogs Haven community in case you missed it. Also apologies in advanced for any English spellings of words, I've tried to change the ones I've noticed, but I could have missed a few. Hope you enjoy!

The Senior Bowl is a place for the best senior prospects to come out and compete against one another; but its also a chance for some small school guys to show they have what it takes to play against the top ranked competition. One man who proved just that was safety Jonathan Cyprien from Florida International. At 6'0", 210 pounds, Cyprien is a good size for either safety position. He's a guy that fly's to the ball and makes plays in both the pass and run game. I personally have him rated as a second round talent and one of the top safeties in a strong class. Here's a few examples of exactly why I feel that way.

This first play is a running back screen. 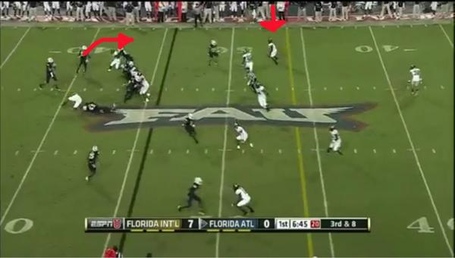 Cyprien quickly identifies the play and makes his way over to that side of the field. 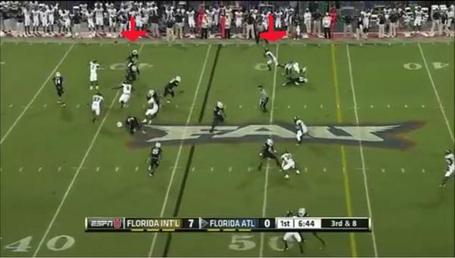 Cyprien is 10 yards away when the pass is tipped, that doesn't deter him from his target. 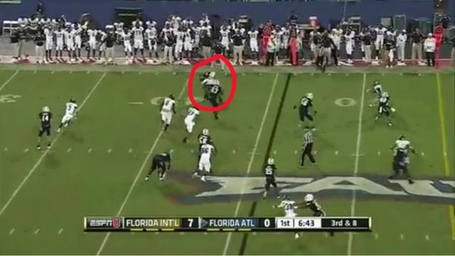 The receiver barely has a chance to secure the catch before Cyprien lays a devastating hit. The play loses four yards, which is a huge play on third and eight.

But Cyprien isn't just a big hitter, he can drop back into a zone and break on the ball. 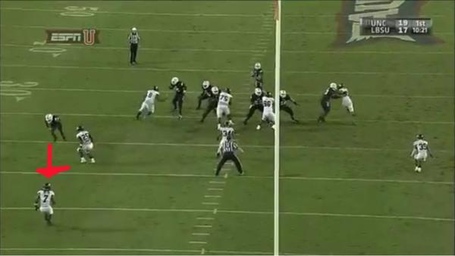 Here is Cyprien dropping back into a Cover 2 zone. 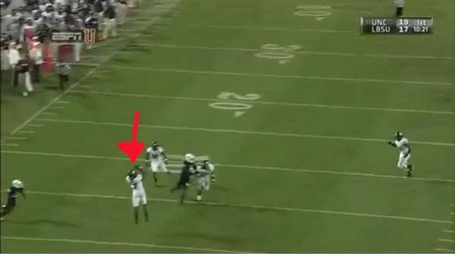 Sure, it's a terrible throw from the quarterback, but Cyprien does an excellent job reading the quarterback and locating the ball in the air. He goes up and grabs the ball, not giving any receiver in the area a chance to make a play. After the interception, Cyprien took the ball back up the sideline to the 40 yard line, a huge interception and return.

Next we have another example of Cyprien in a deep zone coverage up against highly rated quarterback prospect Teddy Bridgewater. 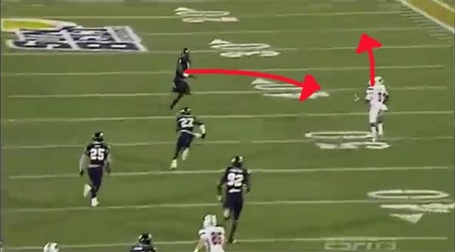 Bridgewater attempts a deep throw up the sideline. The receiver appeared to be wide open, but Cyprien read the play all the way and displays his range to get to the receiver in time. 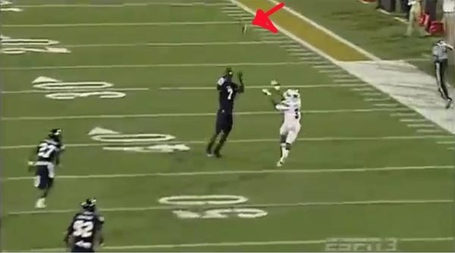 Just like on the last play, Cyprien locates and plays the ball in the air, rather than worrying about the receiver. 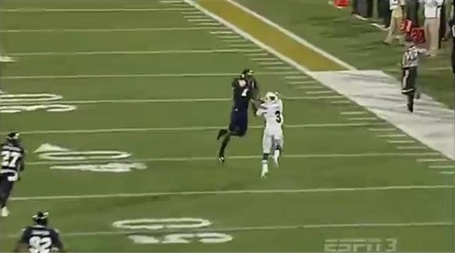 He makes a good hands catch, just to further ensure the receiver cannot make a play on the ball. Plays like this that show his range and ball skills make me think he's better suited to playing free safety in the NFL.

Here's one more example of his range and ability to cover sideline to sideline. 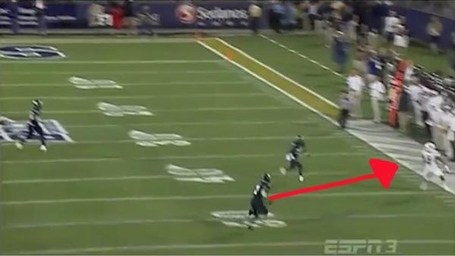 Once again Cyprien sits in a deep zone. He reads the quarterback's eyes and breaks on the ball as its thrown. 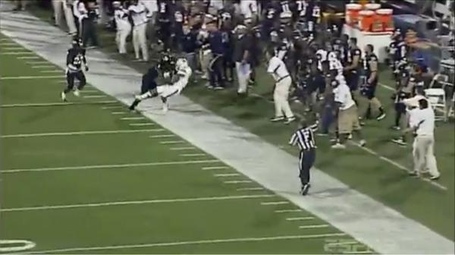 On this occasion, Cyprien isn't able to make a play on the ball, so this time he lays out the receiver, who isn't able to get his feet inbounds. The refs called a helmet-to-helmet hit, but the replays showed that the hit was clean.

But it's not all about roaming from sideline to sideline, sometimes the biggest plays come across the middle of the field. 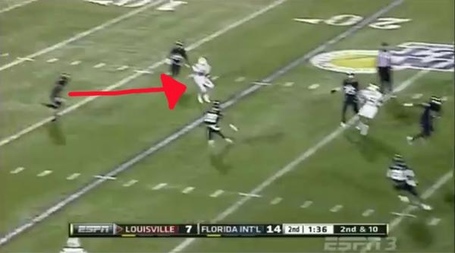 On this play, Bridgewater finds his receiver across the middle for what would have been a first down. However, Cyprien isn't ready to give up the reception just yet. 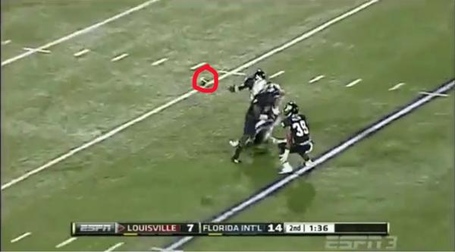 This was quite possibly the biggest hit of the plays I've shown you. The receiver had no real chance of holding onto the ball, which as you can see fell incomplete. With that kind of range and hitting ability, Cyprien could be a guy that receivers fear going across the middle in case they meet him there. Hits like that will certainly intimidate a lot of receivers.

The last two plays I have for you came in goal line situations. Cyprien was forced into man coverage and the offense went after him twice. Lets have a look to see how he fared. 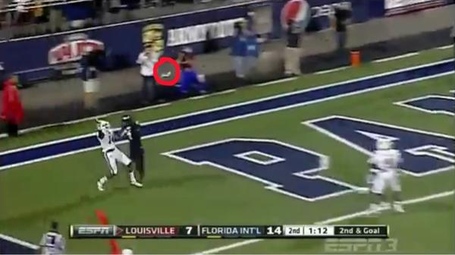 This first play is a fade route to the corner of the end zone. Cyprien has it covered about as well as it can be covered, getting his head round to try and find the ball as well. The ball falls incomplete.

The offense went right back at him though. 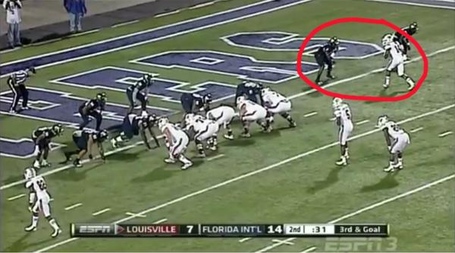 This time Cyprien lines up in the slot against a much bigger receiver. 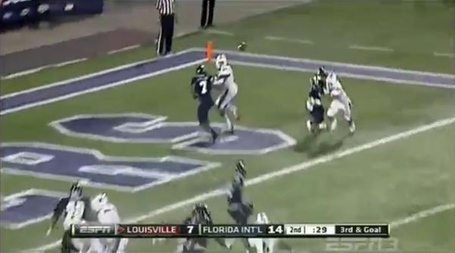 The ball is thrown early and to the back shoulder of the receiver. 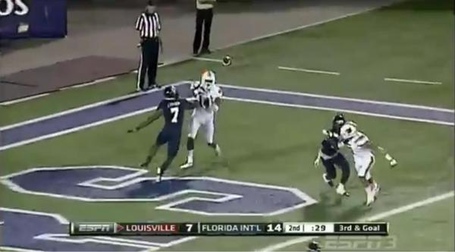 Ideally you'd like to see Cyprien get his head around and locate the football as he realizes the receiver is turning to the ball. But as it is, Cyprien is still covering it very well, using his hand to try and interrupt the pass. 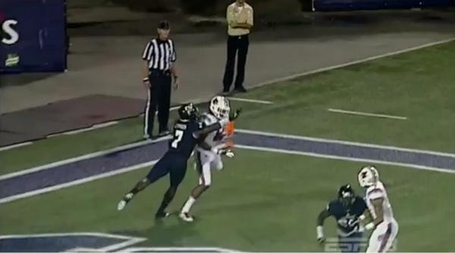 The pass ends up being complete, but in all honesty, there really wasn't a lot more Cyprien could have done. He covered it very well, it was just a very good back shoulder throw.

As I stated at the beginning of this article, I have Cyprien rated in the second round and believe he could be a very good free safety in the NFL. His range and coverage skills combined with the force of his hitting ability could see him as an intimidating center fielder that receivers run away from. One of his few question marks is that he played at a small school, so how does that production translate against better competition. But he was one of the bright sparks at the Senior Bowl, showing up well in one-on-one drills and making plays during the game. The small school status could possibly hold him out of the first round, but I'd look for his name to be called early on day two.