An All-22 film breakdown of some defensive issues in game vs. Giants

Recently, I've been breaking down a lot of offensive tape. This week, I took a look at the other side of the ball. In my personal opinion, I think the defense played pretty well. With that being said, lets take a look at some of the plays the Redskins probably with they had back.

Eli Manning has two plays called here as he approaches the line of scrimmage. When he sees both safeties stay deep, he checks to the run play. Redskins slant right (bringing Josh Wilson on a blitz from the slot) and the Giants are pulling left (from this camera angle).

D-line is pretty much taken out of the play purely on the play-call. Pulling TE and backside guard to block London Fletcher and Wilson. 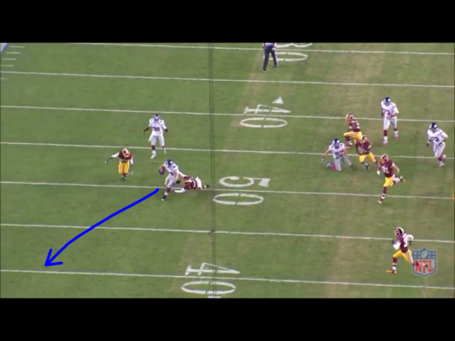 Brandon Meriweather takes on Peyton Hillis high and gets stiff-armed to the ground. Hillis gains 27 yards. 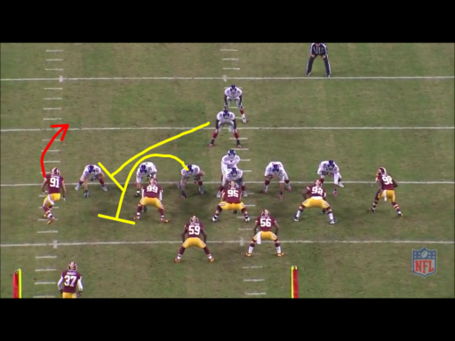 A few plays after the Hillis run, Giants get another big run. Ryan Kerrigan was lined up on the TEs inside shoulder and reset on his outside shoulder right before the snap. 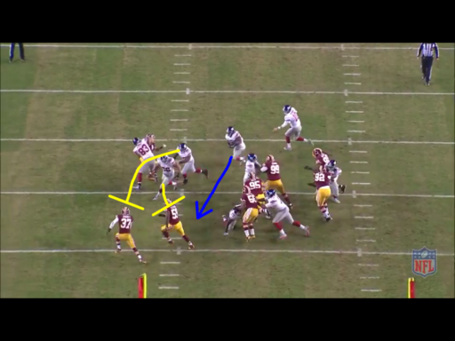 Kerrigan gets washed out but keeps contain and forces the run inside. Giants have FB and playside guard coming through the hole to block Reed Doughty and Fletcher. 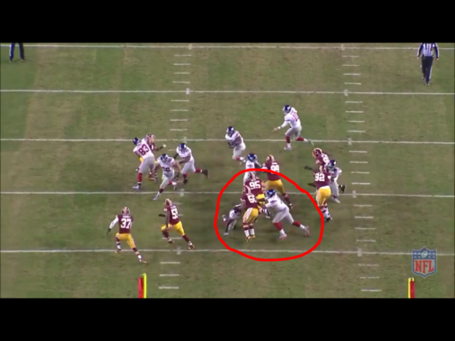 In the same screenshot, you can see Perry Riley should be able to fill this gap and make the tackle. Riley beats his block but Chris Neild also beats his block. Neild beats his block so bad that he sends the center on his stomach and he accidentally cut blocks Riley. Sometimes it's better to be lucky than good. After that, Andre Brown has easy road to a 23 yard touchdown. 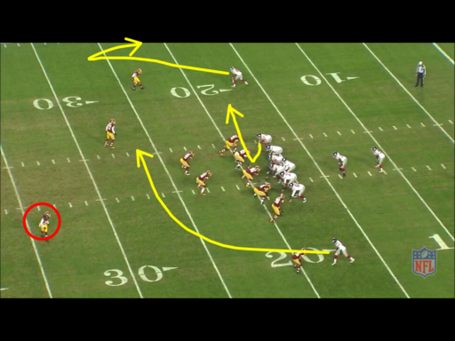 On this play, Giants run a stretch left play-action bootleg right. The play should look familiar. Redskins have one safety deep with Doughty coming up into the box. 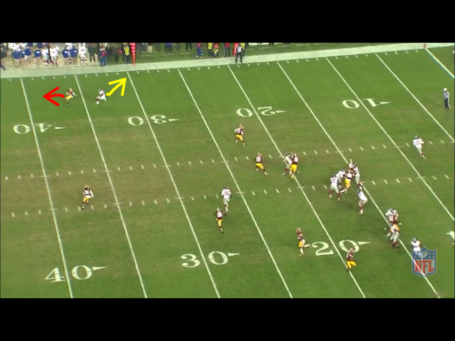 DeAngelo Hall has no help over the top and has to respect Victor Cruz's speed by staying over top of him. When Cruz gets Hall into a full speed retreat, he breaks off on his comeback route. 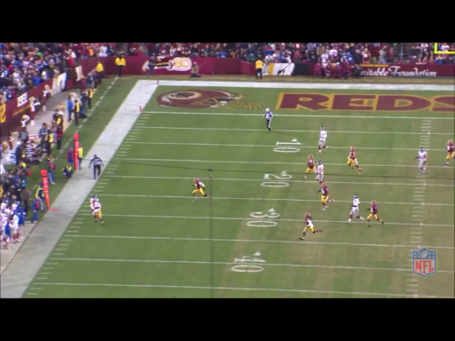 Manning delivers the pass and it ends in a 1st down. 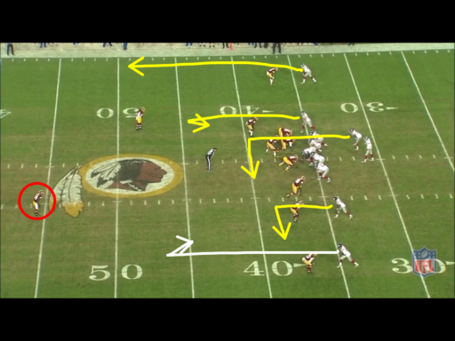 Here is a 3rd down play. Redskins are in Cover 1 man. Hakeem Nicks vs. Hall at the bottom of the screen. Nicks is running a hitch route.

Hall attempts to press but Nicks beats it quick. 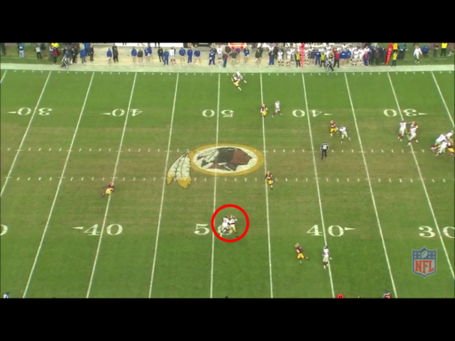 Luckily, losing press coverage doesn't hurt so much on a hitch route and Hall is relatively good at mirroring and running routes for WRs. He recovers and puts himself between the WR and QB but Nicks somehow manages to come down with the ball for a gain of 15 yards. 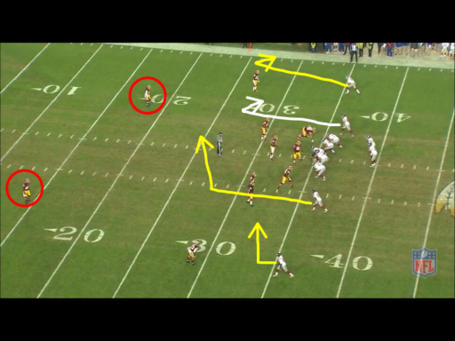 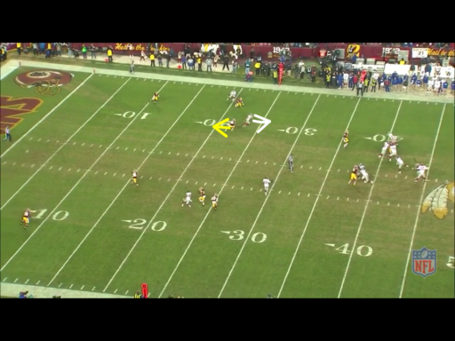 Myers presses Riley up the field which causes him to turn hips. As soon as Riley does that, Myers breaks off his route.

Eli has an easy window to throw and Myers comes down with a 10 yard gain. 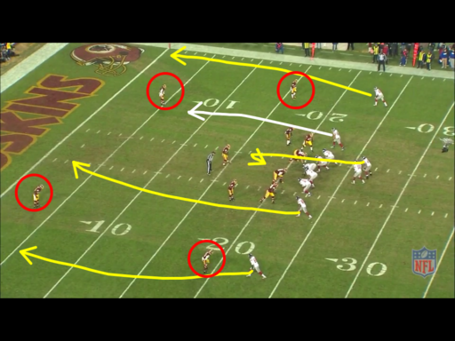 Frustrating play here. I sensed it live too because the 49ers hit us with a similar play to Vernon Davis close to the end zone the previous week. This play is doomed from the start. Redskins are running a Cover 2 zone vs. 4 vertical routes. So the math says, you have two safeties splitting the field in half with 4 WRs entering those zones. If LB drops correctly (which is no guarantee with the Redskins), then you still only have 3 guys to cover 4 receivers. 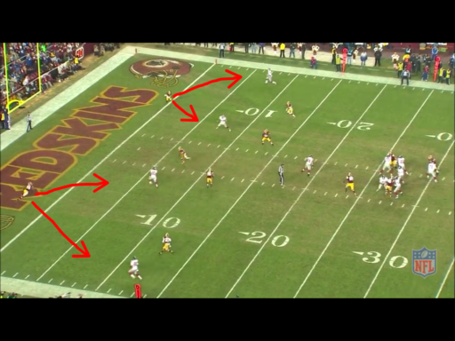 At this point in the play, Meriweather (safety at top of the screen) needs to chose between the seam route and the fly route on the outside. Bacarri Rambo forced to do the same. I count 3 guys open here (Riley did successfully drop underneath one route) and they're all open for TDs. 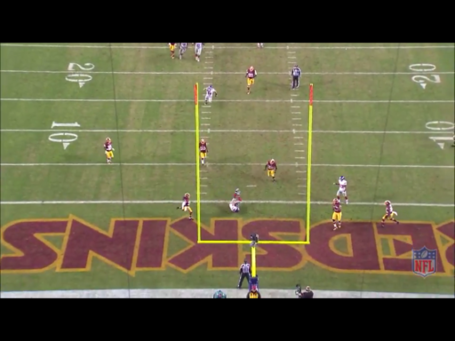 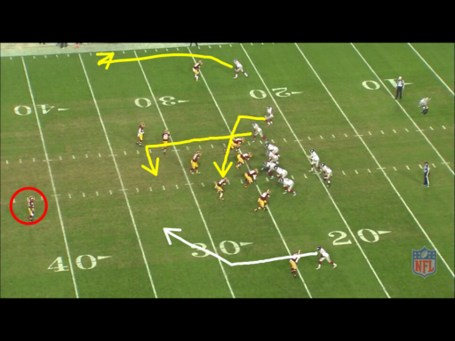 Redskins are running a Cover 1 man here. Nicks at the bottom of the screen running a post route vs. Hall. 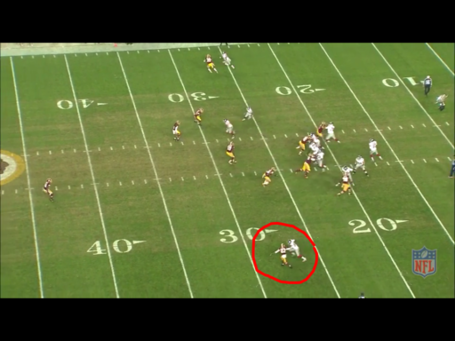 Hall plays outside technique and gives up the inside which is where Nicks wants to go with post route. 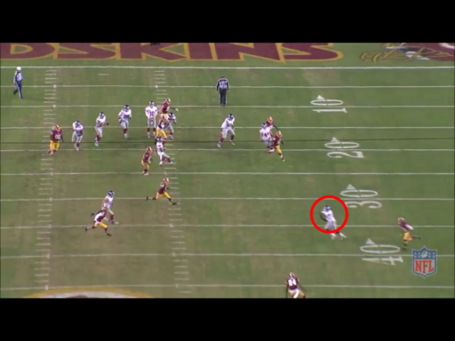 Nicks breaks on post route and has plenty of separation. Hall asked refs for a push-off call but I didn't see much to warrant it. 19 yard gain. 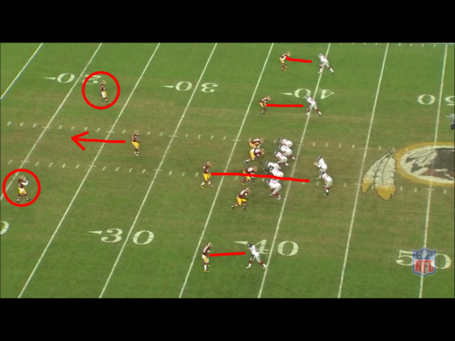 This play was a chess match. Eli brings his team to the line and calls out an audible. London Fletcher counters with an audible of his own. Now I saw most defenders passing on this call to the rest of the defense with hand signals. Looks like whole defense plays Cover 2 man. . . . .except Fletcher, the originator of the call, is already dropping back like its Cover 2 zone. Fletcher is already far back and keeps dropping after the ball is snapped. 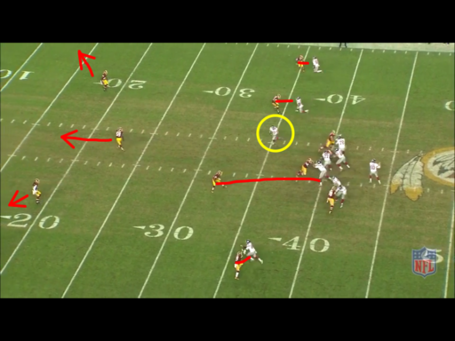 Everyone is in man coverage but no one is there to account for the TE. Riley takes the RB out of the backfield who runs a route to the flat. 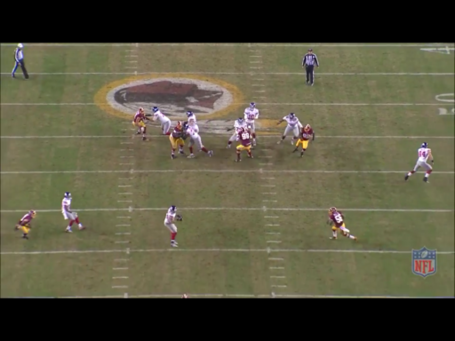 Manning and Myers read it immediately and hit pop pass with absolutely no one around him. Myers doesn't get tackled until he makes it to Fletcher deep. 18 yard gain. 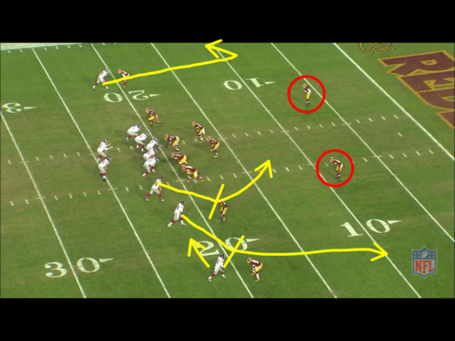 The Giants, in the red zone, try to run a fake screen here. Myers and Hicks at bottom of the screen are going to give the impression they're blocking and then both head up-field on deep routes. Redskins show a Cover 2 here but shift to Cover 1 man when Rambo drops into the middle of the field to cover Myers. 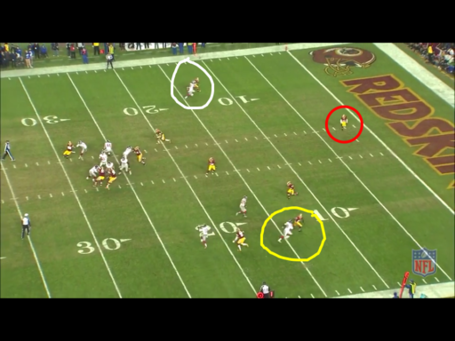 Meriweather is the single high safety. Eli pump fakes the screen pass and then looks to Nicks up the sideline. Josh Wilson doesn't bite on screen fake and has good coverage on Nicks, taking it away from Manning. Meanwhile, at the top of the screen, it's Hall vs. Cruz. Hall played outside technique and gave Cruz the inside. 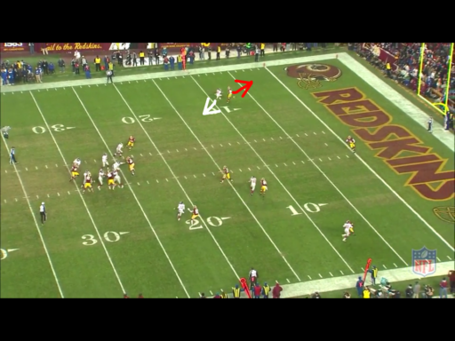 Hall stays over top of Cruz who then crosses to the outside behind Hall's back and gets DeAngelo all turned around. Cruz then stops his route and comes back to the ball.

Manning finds him on opposite side of the field that his initial read was on. Cruz gets the ball and fight down to the one yard line. 19 yard gain. 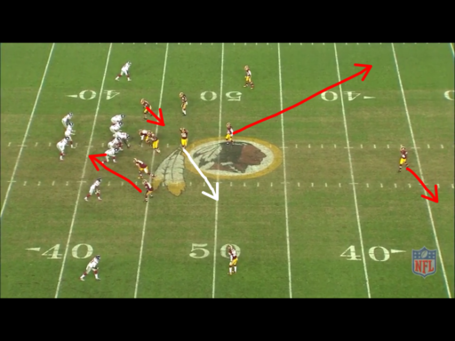 Here's an interesting play call. Redskins are showing a Cover 3 here but it's really a Cover 2 zone in disguise. Meriweather is in the box and is going to drop deep at the snap of the ball. In addition, Wilson is blitzing from the slot CB spot (at bottom) and Brian Orakpo (at top) is going to be dropping into coverage in the middle of the field. I have Riley's assignment marked in white because I believe that's where he is suppose to be but doesn't go there. 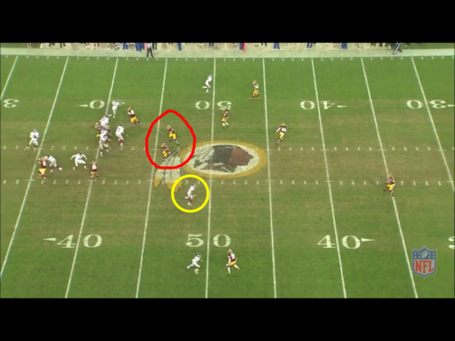 Orakpo drops into the middle of the field but Riley is there too. They're both covering the same spot. Meanwhile, Cruz (the WR Wilson was over before he blitzed) is wide open. I believe Riley is suppose to get underneath that route. 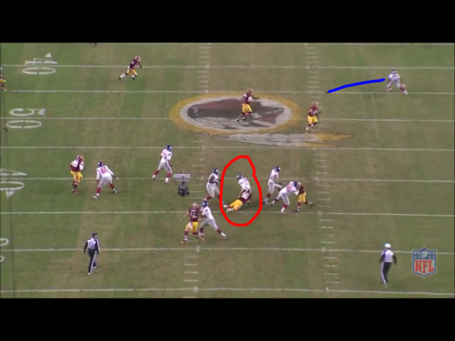 As you can see, if Riley gets under the route, this goes down as a sack for Barry Cofield. Instead, it's a 13 yard gain.

I'll tell you why I liked this play call. DeAngelo Hall and David Amerson are great route jumpers. If you can get a team to believe you're in a Cover 3 when you're really in a Cover 2 zone, it creates opportunities. In Cover 3, short outside routes are wide open (as you have seen in this breakdown, Giants attacked that area). If you're actually in a Cover 2 zone, you can jumps those routes which plays to Hall's and Amerson's strengths. Here's the downfall; if you're going to run it a lot, you're trusting Meriweather to get back deep each time, which I don't. Sean Taylor used to line up all over the place but could always get to his spot. 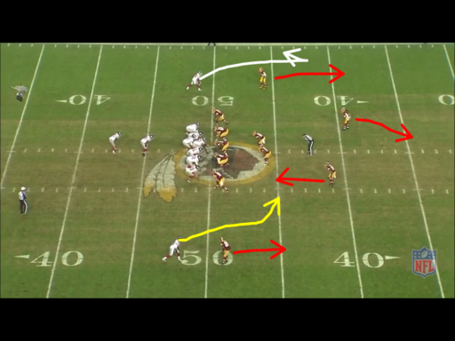 Last play we'll look at here. Redskins are running a Cover 3. It's late in the game and they're putting 8 men in the box to sell out and stop the run. Giants run a play-action pass and look what route Hall has to deal with at the top of the screen. 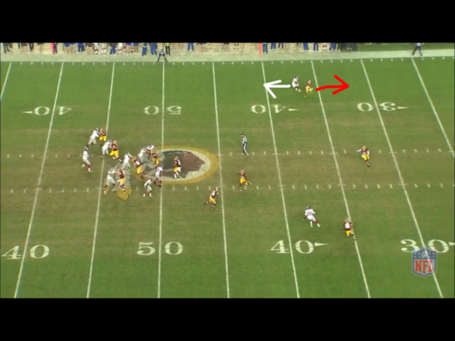 Eli fakes the hand-off. Cruz pushes hard up-field, and gets Hall to turn his hips the opposite way again and again, thats where Cruz breaks off the route. 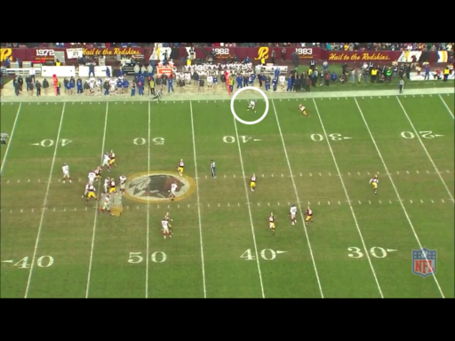 Cruz catches the ball here. Look at the separation he got from Hall. The distance causes Hall to miss the tackle and give Cruz yards after catch. 22 yard gain.

Like I said, overall, the defense didn't play a bad game. Just a handful of plays though can be the difference between victory and defeat.