Even though the Washington Redskins were finally put of their playoff misery on Sunday Night Football in front of the whole world, the Hump Pick'em staff and I took some solace in the notion that we seemed to be doing better than normal with our picks.  In fact, after Monday's games, we finished the week with a more-than-respectable 9-7 record, giving me a total of 9 points.  Would that be enough to hold off the covetous contestants?  Here were the Week 13 results:

Congrats to HogHunter!!!!!  This is the second time you have shamed me in the last few weeks.  There is no need to send me your address as I still have it from the last time and will get your prize right out to you.

My impressive results, the loss to HogHunter not withstanding, have brought my season totals to 82-104-7.  With heads held high and tails between our legs, we carry on to Week 14.

Houston Texans (-3) at Jacksonville Jaguars: Someone at the NFL Network deserves a raise after scheduling this one.  Pick: Jags (+3)

Kansas City Chiefs (-3.5) at Washington Redskins: One reason to watch this will be to see if the Redskins players continue to fight for Mike Shanahan.  The main reason, though, will be to see those awesome Anchorman 2/Dodge commercials.  Pick: Chiefs (-3.5)

Minnesota Vikings (+7) at Baltimore Ravens: Expect to see very little of this game on the RedZone Channel.  Pick:  Ravens (-7)

Cleveland Browns (+11.5) at New England Patriots: Tom Brady probably looks at Brandon Weeden and is jealous that he gets to throw to Josh Gordon.  Brady needs to learn that, sometimes, life just isn't fair and you have to count whatever small blessings you might have.  Pick:  Patriots (-11.5)

Oakland Raiders (+2.5) at New York Jets: This is one of those fun occasions in which two terrible teams meet to see who will make the least amount of mistakes and stay alive in the AFC playoff hunt.  Pick: Jets (-2.5)

Indianapolis Colts (+5.5) at Cincinnati Bengals: The last four weeks, the Colts have been a real Jeckyll and Hyde team.  Not like in the classic sense, but more like in the "you never know what you're going to get" kind of way.  Pick: Bengals (-5.5)

Carolina Panthers (+3.5) at New Orleans Saints: This game has been flexed to Sunday Night Football on NBC, but mostly because Bob Costas scored a cameo in the HBO show Treme as Man in Fight 2 and needed to be on location.  Pick: Saints (-3.5)

Miami Dolphins (+3) at Pittsburgh Steelers: The bad news for Mike Tomlin is that he is expected to be severely fined for standing too close to the field last week and disrupting a return by Ravens receiver Jacoby Jones.  The good news is that, after reviewing the game footage, the Elias Sports bureau has decided to credit Tomlin with a .5 tackle on the play.  Pick:  Dolphins (+3)

Buffalo Bills (+2.5) at Tampa Bay Buccaneers: You know things are bad when you are still getting points as a visiting team in Tampa.  Pick: Bills (+2.5)

Tennessee Titans (+12) at Denver Broncos: To prepare for this game and simulate real-time conditions, Titans head coach Mike Munchak has practiced every day this week with the scoreboard reading Home: 30 Away: 0.  Pick:  Broncos (-12)

St. Louis Rams (+6) at Arizona Cardinals: The Cardinals are clinging to their playoff hopes.  The Rams are on the fence, as either way they are getting some sweet draft picks in 2014.  Pick: Cardinals (-6)

New York Giants (+3) at San Diego Chargers: Justin Tuck's ego will come crashing back down to Earth when he realizes he doesn't get to play against Redskins guard Tyler Polumbus every week.  Pick:  Chargers (-3)

Atlanta Falcons (N/A) at Green Bay Packers: Will Aaron Rodgers play or not?  Green Bay fans haven't been this racked with anticipation since they had to wait those two minutes while their new four cheese Hot Pocket cooked.  Pick: Packers (N/A)

So there are my Week 14 picks.  The winner this week will have this fabulous prize to look forward to: 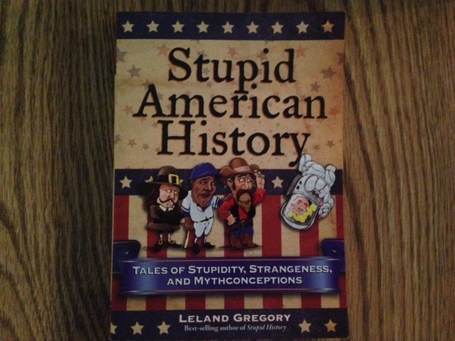 That's right - the enthralling and hilarious book Stupid American History, written by Leland Gregory.  You may recognize him from his other great offering Stupid History.  This book will look great on your coffee table or in that little basket in your bathroom.