Guess what day it is??? Well yeah, it's Christmas, but also Mike Harar continues his weekly pick'em contest.

Even though a win or loss did not really matter for the Redskins this past Sunday, the Hump Day Pick'em staff and I were on our hands and knees in the Joe Gibbs praying position as the Cowboys needed to convert on a long fourth and goal to win the game late in the fourth quarter.  And just as we were extremely disappointed by the Burgundy and Gold (who let us down yet again), we were also disappointed with our picks as we finished with another week of 8-8, which gave us another less-than-exciting total of eight points.  Would that be enough to hold off the mercenary contestants?  Here are the Week 16 results:

Of course, my lousy point total was not enough and we had two contestants at the top of the leader board with 10 points.  A special thanks goes out to the Ernst & Young representatives who drove out to the Hump Day Pick'em offices on Christmas Eve despite their family's wishes to watch over the tie breaking proceedings as our lovely assistant drew the following name: 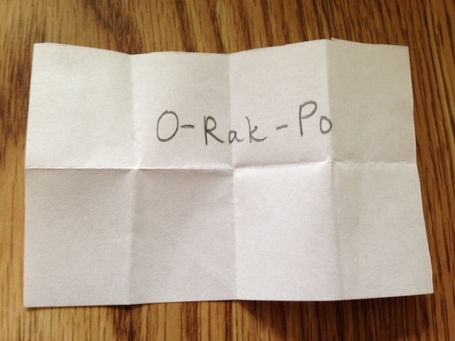 Congrats to O-Rak-Po!!!!!  This is his second victory of the season and gives him bragging rights over me (along with so many other contestants who probably should be doing this instead of me) and puts him in the elite Two Win Club.  Please email me your address and I will get your prize right out to you.

With my 8-8 record this week, my total record sits at a sad 108-126-7 and I am now assured of a losing season.  However, with today being Christmas, I refuse to let my record get me down.  With a smile on my face and a mimosa in my hand I will press on for the final week of the regular season.

Houston Texas (+7) at Tennessee Titans: The Texans hope to lock up the number one pick in the 2014 draft with a big loss to the Titans.  Pick:  Texans (+7)

Cleveland Browns (+7) at Pittsburgh Steelers: If the Steelers beat the Browns, the Ravens lose to the Bengals, the Dolphins lose to the Jets, the Chargers lose to the Chiefs, and Mike Tomlin can find the Ice Queen and destroy her with the diamond sword before the stroke of midnight, the Steelers will be in the playoffs.  Steeler fans have to feel pretty good about that set up.  Pick:  Browns (+7)

Baltimore Ravens (+5.5) at Cincinnati Bengals: The playoff possibilities are endless on this one, kind of like the new Hunger Games movie that I got dragged to.  Pick:  Ravens (+5.5)

Detroit Lions (+3.5) at Minnesota Vikings: Any fan of the game knows this is can't miss viewing, as it may be the last time we'll be treated to Jim Schwartz versus Leslie Frazier.  Pick: Lions (+3.5)

Buffalo Bills (+9.5) at New England Patriots: This game has been flexed out of Sunday Night Football, which is surprising considering the Bills will be going for their third straight win and E.J. Manuel will be looking to become just the second Bills rookie quarterback to throw for more than 2,000 yards in a season.  Pick:  Bills (+9.5)

Tampa Bay Buccaneers (+12.5) at New Orleans Saints: It's pretty simple for the Saints.  Win this game and you're in the playoffs.  Except someone forgot to tell Bucs coach Greg Schiano....  Pick:  Saints (-12.5)

Denver Broncos (-12.5) at Oakland Raiders: The Raiders have announced they will go with Terrelle Pryor at quarterback to evaluate him one more time before the offseason.  In other news, look for the Raiders to draft a quarterback high in the 2014 draft.  Pick:  Broncos (-12.5)

San Francisco 49ers (-3) at Arizona Cardinals: The Cardinals found out Monday that they need to win this game and also need Greg Schiano and the Bucs to beat the Saints in order to make the playoffs.  Showing how much they respect Schiano, Cardinals' brass began preparing for the offseason immediately.  Pick:  49ers (-3)

St. Louis Rams (+10) at Seattle Seahawks: The Seahawks need this win to clinch the NFC West and homefield advantage throughout the playoffs.  The Rams are playing for pride or whatever.  Pick:  Seahawks (-10)

Philadelphia Eagles (-7) at Dallas Cowboys: Who could have predicted that the Eagles would be playing the Cowboys in Week 17 in Dallas?  Pick:  Eagles (-7)

Green Bay Packers (N/A) at Chicago Bears: It's too bad Vince Lombardi isn't around to yell at Matt Flynn when he makes mistakes, because that would be great.  Pick:  Bears (N/A)

So there are my Week 17 picks.  The winner this week will have this fabulous prize to look forward to: 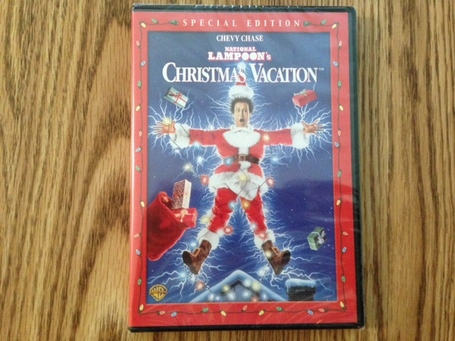 That's right - everyone's favorite Christmas movie, "National Lampoon's Christmas Vacation." This is the one where the Griswolds don't actually go anywhere but hilarity still ensues.  And because we know the Hump Day Pick'em contestants expect nothing but the best, it is the Special Edition version that includes special commentary by Randy Quaid and has subtitles in English, Spanish and French.

Merry Christmas, Happy Holidays to all and good luck!!